South Africa's roads are notoriously dangerous during the festive season, with routes between towns and villages in the Eastern Cape being especially deadly.

More than 1,450 people died on South Africa's roads during the previous festive season, from 1 December 2020 to 11 January 2021. This equates to an average of around 34 road deaths a day. And although fatalities decreased by 10% compared to the previous festive period, traffic volumes also dropped because of the lockdown regulations which dissuaded travel.

The Road Accident Fund (RAF) recently reminded South Africans of the country's most dangerous roads, with routes in the Eastern Cape and Limpopo listed as the deadliest. The stretch of N2 highway between East London and Umtata and Umtata to Kokstad ranked as the worst. The N1 from Mokopane to Polokwane and Polokwane to Makhado in Limpopo followed.

The RAF, which provides liability and collision insurance coverage to all road users in South Africa, said that it had obtained the data from the Road Traffic Management Corporation (RTMC). But it didn't attach a specific period to the list of South Africa's dangerous roads, which featured the distance of the route between two destinations.

"[The] list of so-called dangerous roads does not seem to accord with the manner in which we determine hazardous roads, and it seems inaccurate," Simon Zwane, the RTMC's chief communication officer, told Business Insider South Africa.

"Our methodology for calculating hazardous routes does not state the number of kilometres as stated on this report. We only look at the segment of the road where the highest number of fatal crashes are reported."

The RTMC files annual road collision reports – tracking fatalities during the Easter period and festive season – and is provided with data directly from the South African Police Service (SAPS). The RTMC captures, processes, and verifies this data of all recorded fatal crashes.

Instead of listing dangerous routes according to the road between two destinations, the RTMC cites the road and SAPS area, where these crashes are recorded, in compiling its report on Hazardous Road Segments.

The RTMC methodology involves calculation of the absolute number of fatal crashes per road name or number for each of the 42 days – 1 December to 11 January – for the past three festive periods. The most recent festive period is weighted 60%, with the year prior at 30% and the year before that at 10%.

These are South Africa's 10 most dangerous roads during the festive season, in descending order, according to the RTMC. 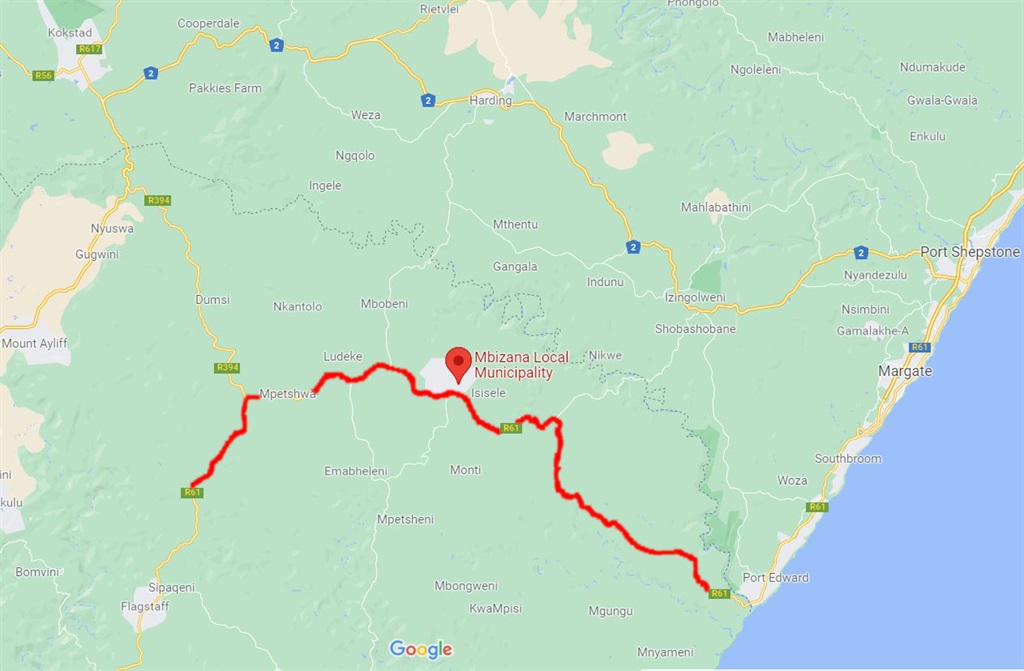 The R61 features prominently in the RTMC's list of Hazardous Road Segments. This specific stretch of road passing through Mbizana runs parallel to the Eastern Cape's border with KwaZulu-Natal. It's part of the route connecting Port Edward with Kokstad. This section of highway, passing through Mount Frere and Mount Ayliff, connects Mthatha and Kokstad. It's a stretch of road which extends from East London and Butterworth, making most of the N2 in the Eastern Cape a particularly dangerous segment. The R71 in Limpopo connects Polokwane with Tzaneen and sees an influx of motorists over the festive period. Many of these are cross border travellers, either leaving or coming back to South Africa. The N3 highway is a major route connecting Johannesburg and Durban. Many fatal collisions are reported to the SAPS in the town of Harrismith in the Free State near the KwaZulu-Natal border. This stretch of the R61 connects Port St Johns with Mthatha and is further south of previously mentioned high-collision zones near Mbizana and Mzamba. The N1 highway between Polokwane and Musina is one of South Africa's busiest stretches of road during the festive season due to its connection with Zimbabwe's border at Beitbridge. This high volume of traffic also makes it one of the deadliest. The stretch of R37 south of Polokwane connects Lebowakgomo with Burgersfort and, like other roads in Limpopo, also carries many cross-border travellers during the festive season. The more southern section of the N2 regarded as the most dangerous stretch of road in South Africa, passing through Dutywa, this part of the highway connects East London with Butterworth.