The 4 most dangerous missions American troops carried out on D-Day, 75 years ago Gen. Dwight D. Eisenhower told his invasion force, "Your task will not be an easy one." He was brutally right.
The National WWII Museum

"Your task will not be an easy one. Your enemy is well-trained, well-equipped and battle-hardened. He will fight savagely."

As the sun set on the blood-stained beaches of Normandy, France on June 6, 1944, Supreme Allied Commander Gen. Dwight D. Eisenhower's message to the thousands of Allied troops dispatched to carry out the largest amphibious landing in military history rang true.

The invasion, codenamed Operation Neptune and remembered as D-Day, sent roughly 156,000 British, Canadian, and American troops to the Nazi-occupied French coast by air and sea, beginning the multi-month Battle of Normandy and the liberation of Western Europe from Hitler's Wehrmacht. This week, as millions gather in Normandy to commemorate the 75th anniversary of D-Day, National WWII Museum senior historian Rob Citino emphasized that the impact of the landings came at a tremendous human toll. By the end of the Normandy campaign, hundreds of thousands of Allied and Axis soldiers and civilians had died and been wounded, with those involved in the initial landings suffering disproportionately.

Citino described the most perilous jobs American troops performed to help make the D-Day landings a World War II turning point. "It was bad enough but would have been worse," he says. The earliest paratroopers of the US Army's 101st and 82nd Airborne Divisions jumped into enemy territory in the dark, facing unrelenting attacks with little back-up and a lot of pressure to light the way.

Strategy and scope: Upwards of 13,000 American paratroopers would jump in the early days of Operation Neptune, the Allied invasion of well-guarded Normandy.

Minutes after midnight on June 6, around 300 101st Pathfinders, nicknamed "the Screaming Eagles," went in first. Paratrooping in lean, highly-trained formations, the Pathfinders were not out to engage in combat. They were to quickly set up lights and flares to mark drop zones for paratroopers and landing paths for the gliders preparing to land.

General Eisenhower's advice to the 101st ahead of D-Day? "The trick is to keep moving."

The Pathfinders paved the way for waves of paratroopers to follow, but paid a heavy price. Threats and losses: The equipment they carried - from parachutes and life jackets to lighting systems they were to set up once on the ground - made their packs so heavy that they had to be helped onto the planes.

Then there was the jump.

Amid the bad weather and limited visibility that night, some were blown wildly off course after leaping from the C-47 Skytrains. Even those who managed textbook landings into the intended locations were at risk.

"It's the loneliness - out there all by yourself with no one riding to your rescue in the next 10 minutes if you get in trouble. You're against all the elements," Citino said. Strategy and scope: Once dawn broke on June 6, 1944, a force of 225 US Army Rangers of the 2nd and 5th Ranger battalions began their attempts to seize Pointe du Hoc. Their mission: Scale the 100-foot rock and upon reaching the cliff top, destroy key German gun positions, clearing the way for the mass landings on Omaha and Utah beaches.

The multifaceted naval bombardment sent the highly trained climbers hauling themselves up the cliffs using ropes, hooks, and ladders. Two Allied destroyers would drop bombs onto the Germans in an attempt to limit the enemy's ability to simply shoot the Rangers off the cliffs.

The Rangers climbed the cliffs in sodden clothes while Germans above them shot at them and tried to cut their ropes. Threats and losses: Beyond the challenging mountain climbing involved in getting into France via the cliffs along the English Channel, the Rangers faced choppy waters and delayed landings, which increased the formidable enemy opposition.

Nazi artillery fire sprayed at the naval bombardment. Landing crafts sank. Those who made it to the rocks were climbing under enemy fire, their uniforms and gear heavy and slippery from from mud and water. Germans started cutting their ropes. Rangers who reached the cliff top encountered more enemy fire, along with terrain that looked different from the aerial photographs they had studied, much of it reduced to rubble in the aftermath of recent aerial bombings. And they discovered that several of the guns they were out to destroy had been repositioned.

Impact: The Rangers located key German guns and disabled them with grenades. They also took out enemy observation posts and set up strategic roadblocks and communication lines on Pointe du Hoc. The 155mm artillery positions they destroyed could have compromised the forthcoming beach landings.

3. The first troops on Omaha Beach Members of the 1st and 29th Infantry Divisions and the US Army Rangers stormed the beach codenamed "Omaha" in the earliest assaults. These were the bloodiest moments of D-Day.

Strategy and scope: Beyond enemy fire, the Allies were up against physical barricades installed to prevent landings onto the six-mile stretch of Hitler's "Atlantic Wall."

To break through, infantry divisions, Rangers, and specialist units arrived to carry out a series of coordinated attacks, blowing up and through obstacles in order to secure the five paths from the beach and move inland.

A fraction of the first assault troops ever reached the top of the bluff. Threats and losses: In pre-invasion briefings, troops were told there would be Allied bombing power preceding them and that the Germans would be largely obliterated and washed ashore, Citino said.

While there were aerial bombings, the impact was not as planned. Some of the B-24s and B-17s flying overhead missed their targets. German troops sprayed guns and mortars with clear views of the soldiers, stevedores, porters, and technical support charging the narrow stretch of beach. Men waded through rough, cold water from Allied landing crafts under withering heavy fire. The dangers continued with mines in the sand.

The scene was similarly gruesome for combat engineers moving in with Bangalore torpedoes to blow up obstacles. Meanwhile, amphibious tank operators tried to shield Allied infantry and medics came ashore to try to administer emergency care while facing counterattacks and navigating around the dead and wounded.

Impact: A fraction of those who landed reached the top of the bluff. Some company headcounts went to single digits. But the troops who helped secure Omaha and the five paths off the beach in the coming days cleared the way for massive tanks, fuel, food, and reinforcements important to the rest of the campaign. 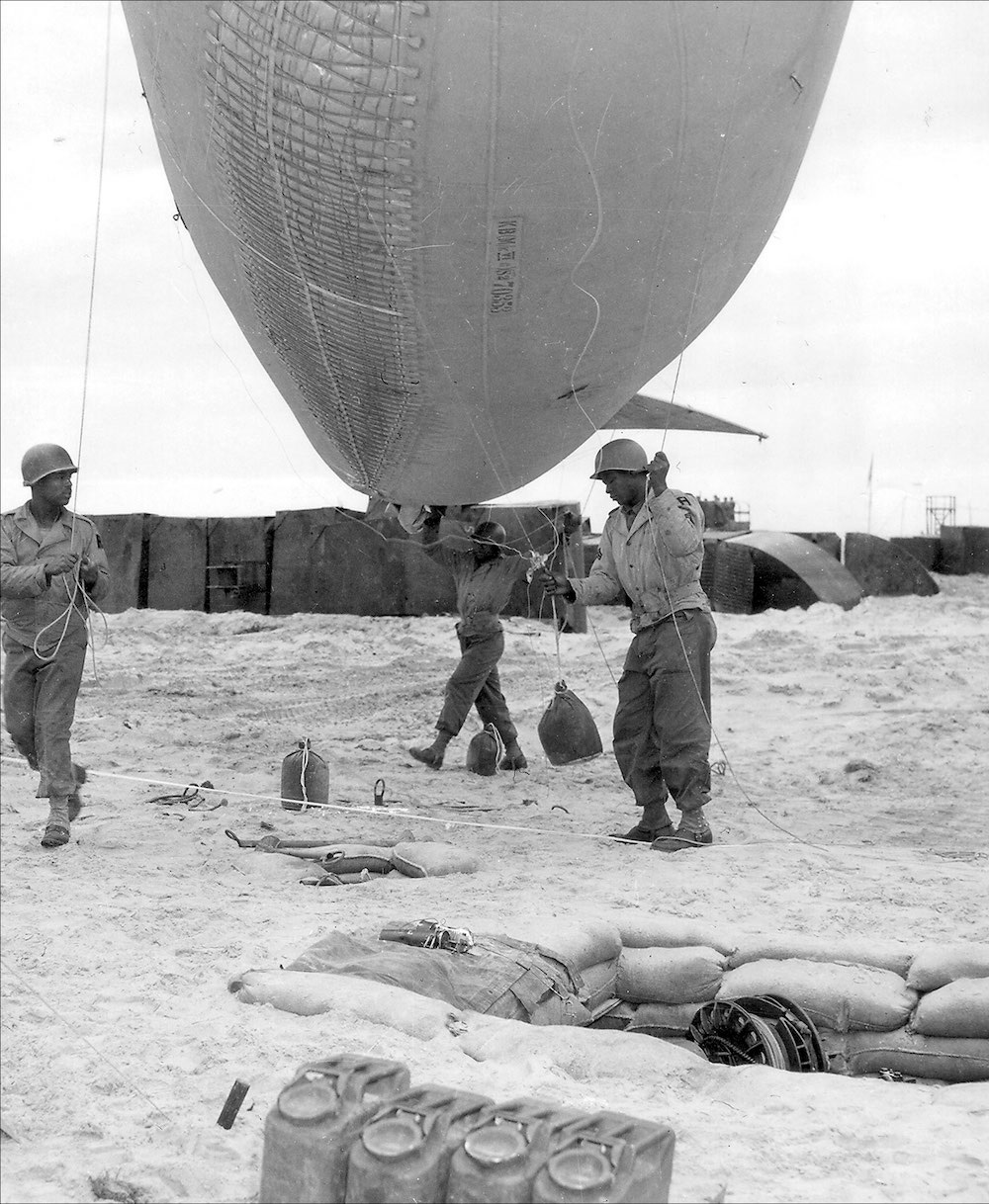 These combat troops landed on Utah Beach and set up key lines of defense to prevent Luftwaffe raiders from strafing the incoming army of troops and supplies.

Strategy and scope: The Allies knew that as soon as the landings began, German air attacks would present a major threat to the masses of troops arriving in thousands of landing crafts. To defend against air raids, they turned to defensive weaponry units, including the 621 African-American soldiers in the 320th Barrage Balloon Battalion, to land with 125-pound blimps and work in teams to anchor them to the ground. Each blimp was filled with hydrogen and connected to small bombs that could denote if enemy aircraft made contact with the cables.

Threats and losses: They came ashore on Utah Beach from some 150 landing crafts on the morning of June 6, facing the dangers of fellow infantry and the added threats that came with maneuvering heavy cables and balloon equipment on the beach under fire. They set up barrage balloons, digging trenches to take cover as waves of fellow soldiers landed.

The air cover allowed Allied troops to move inland with less threat of being bombed or strafed by German planes.

Impact: As landing craft after landing craft came ashore on and after D-Day, the 320th's balloons gave Allied troops and equipment some protection, allowing them to move inland with less threat of being blown into the sand by German fighters.

The hydrogen-filled balloons they deployed along the coast created barriers between the Allied troops and the enemy aircraft out to decimate them. Citino said that their actions setting up the defensive balloons under enemy fire were "as heroic as it gets."