After a year of working above a toilet, this mom still loves her home office in a bathroom Niamh Sproul sits in her home office, which was previously a spare bathroom.
Ralph Modica/Compass

The pandemic drastically changed how many people work. No longer in cubicles or seated at work desks, people have been tuning into Zoom calls from their beds, sofas, and kitchen tables.

Niamh Sproul, the head of learning and development at a financial services company in the US, relocated to the most unlikely room in her home: the bathroom.

After unsuccessfully working in her bedroom with her husband, Sproul, 44, transformed a spare bathroom into a home office in her apartment in New York.

"Everyone had to make major adjustments to their life, and this was a quirky, on-a-whim, random idea that I had," the mom of two told Insider. "And it worked." Niamh Sproul made the space homey by adding a fake plant, pictures, and candles.
Ralph Modica/Compass

About a month into the pandemic, Sproul said she realised her work-from-home situation wasn't working. Sproul said she and her husband were constantly moving in and out of their bedroom, which served as their primary office, to answer calls and video chats. Meanwhile, her two children occupied the living room for virtual school, she said.

Sproul said she started brainstorming where she could have privacy for calls and landed on the half bathroom in her two-bedroom apartment.

The 130-square-metre apartment has 2.5 bathrooms, and at the time, Sproul's family didn't use the half bath, she said. Instead, she said it was their "dumping ground" for their bikes, excess luggage, and strollers. Since the pandemic meant few friends and guests would be stepping into their home, a guest bathroom had no purpose, she said.

One Saturday in April 2020, Sproul said she decided to transform the space. The whole transformation took about an hour, she said.

She said she measured the length and width of the bathroom and realised that her desk would fit above the toilet, plus there'd be enough legroom to avoid touching the ceramic toilet bowl. Using a blanket, she said she dragged the desk from her bedroom into the bathroom.

Then, she said, she added her computer monitor and searched her home for decor to make it feel less like a bathroom. She said she used a fake plant to conceal the towel rack and added a few books and candles on the vanity, as well as some framed family pictures on the walls. She even added a "do not disturb" sign to the outer door handle, she said. 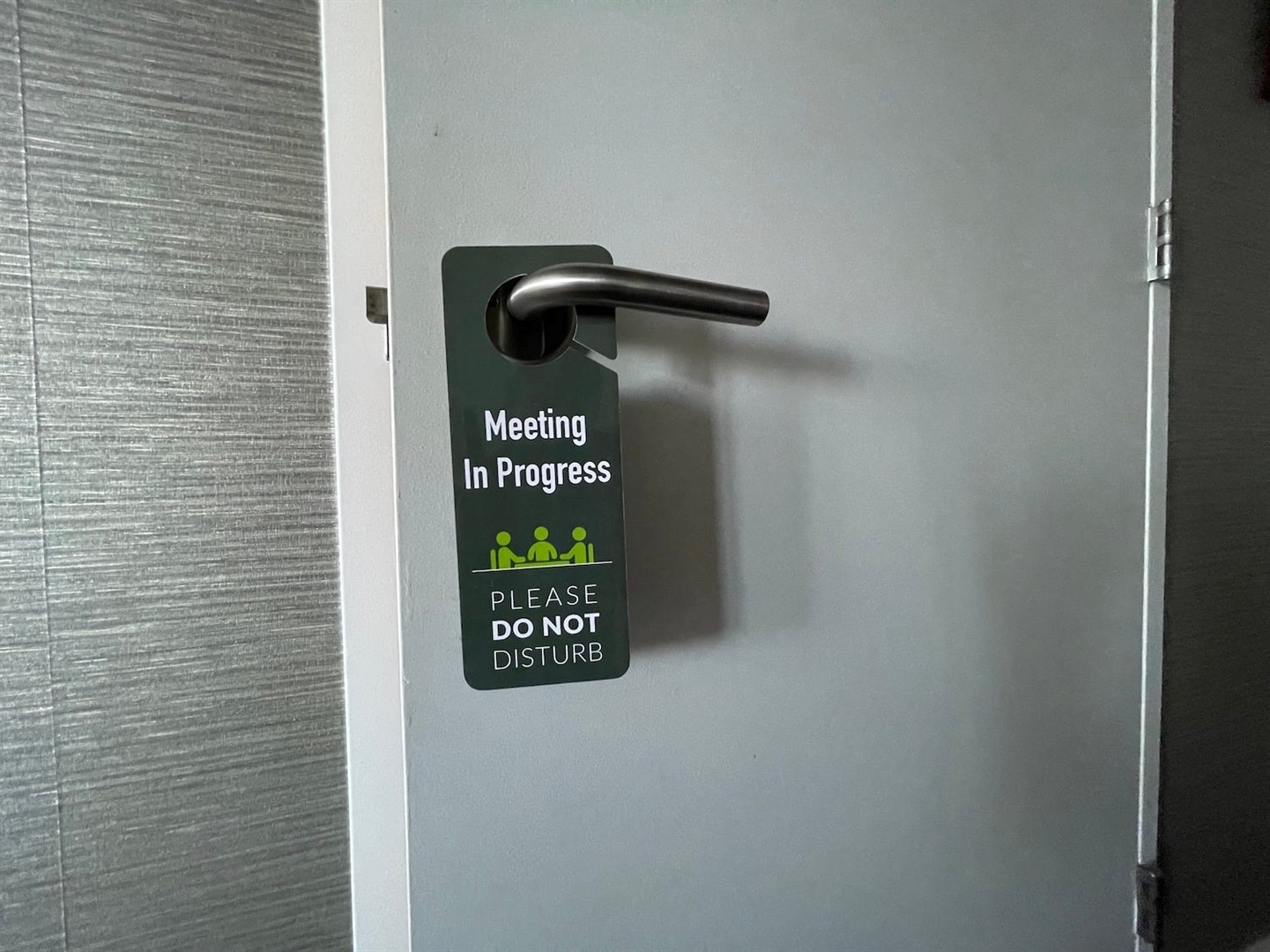 Niamh Sproul also added a sign to the bathroom door, so her family would know when she's in a meeting.
Ralph Modica/Compass

The following Monday, when she logged onto her first video call, Sproul said her colleagues immediately noticed the change of scenery. One wanted to know if she had relocated to a hotel, she said, while another asked if the family had moved.

Sproul said she's received mixed responses to the bathroom-turned-office. Some thought it was a creative solution, while others found it icky, she said.

"I'm not grossed out by it. It's not a functioning bathroom. There's no smell. It's actually quite pleasant," she said. "The only thing that's negative about it is there's no natural light."

A year later, Sproul says she is still working in her unconventional office - even after her children have gone back to in-person school - and that she likes the space.

Sproul said she doesn't plan to be working from her spare bathroom forever, though.

At the end of June, Sproul said her family is relocating to Los Angeles, California, where she'll be working at the same job. Her suburban home will be an upgrade, she said, with three bedrooms, three bathrooms - and this time, an office.

Read more on:
designhomeofficebathroomwork from home