South Africans can be forgiven for assuming that packaging marked with a number in a triangle can be recycled.

In fact, a depressing amount of packaging cannot yet be recycled in South Africa.

The number 1 to 7, usually printed within a triangle, refers to the type of resin contained in the packaging.

Because this looks so similar to the recycle symbol, it's a common misinterpretation that the packaging can be recycled in South Africa.

But while most resin types are technically recyclable, many are not recyclable in South Africa. The original numbered labels were designed to assist waste collectors and waste separators, and not the customer. Here's how different retailers are approaching this conundrum:

Woolworths has been changing the wording on its packaging to reflect a more honest indication of what can be recycled in South Africa. If a product is marked with "widely recycled in SA", Woolworths clients should be assured that it is recyclable.

“If there isn’t an existing industry [in SA] collecting and recycling certain types of plastics, then the plastic type in question will be considered as ‘not currently recycled’ even if it is technically possible to do so,” a Woolworths spokesperson told Business Insider South Africa.

Woolworths have made a commitment that by 2022 all packaging will either be recyclable or reusable.

Visiting the local Woolworths we found a few execptions. Take for instance these Woolworths blueberries labelled with a PET 1. The majority of the goods in the store were labeled correctly, but sadly a large amount is not recycled in South Africa. These stores are also adopting more straight-forward wording on its own packaging. Products marked "plastic recycled currently" can be safely recycled.

We had a look at some of the products in Shoprite and Checkers stores and noticed that, for example, some of the pre-packaged meals were marked with this wording, and others not. We also found that Shoprite introduced fully biodegradable and compostable avo punnets, which can biodegrade by 90% within three to six months of composting. 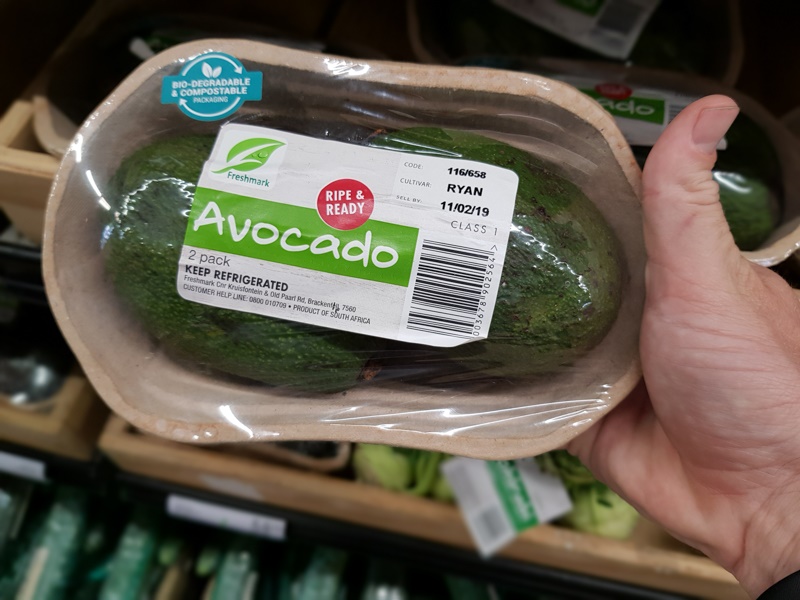 The group says from November 2018, the packaging of various other fruit and vegetable packs are being replaced with fully biodegradable and compostable containers, which will reduce their use of foam punnets by 3.5 million punnets a year.

Pick n Pay is slow off the mark, and its packaging is still mostly marked with the resin codes. According to Andre Nel, GM for Sustainability at Pick n Pay, most of their private label packaging (except for very small labels) still includes resin identification codes.

“We are currently reviewing our labelling to include clear on-pack information about the recyclability of packaging to make it easier for customers to understand,” said Nel.

While they have not transitioned to more honest labels, Pick n Pay say it’s safe to recycle a “high percentage” of their own branded goods including their juices; carbonated soft drinks; oil and other products in PET bottles and jars; punnets used for fresh products; bottles for household cleaning; and sleeves on convenience meals.

“Even though some of these codes aren’t yet recycled in South Africa, we believe it is important that all plastic types that are technically recyclable remain in the recycling stream.”

We found a few items that were labelled as 'suitable for recycling' - on milk cartons and avo punnets. But, this 'suitable for recycling' does not mean it is recycled in South Africa, it simply means it is recyclable. If you buy the avos from Woolworths you'll see a different story.

According to the Department of Environmental Affairs’ (DEA) State of the Waste report, South Africa generated 54.2 million tonnes of general waste in 2017.

An estimated 38.6% of the waste was recycled - up from only 10% in 2012. But the DEA found that with the correct infrastructure, millions of tons more could be recycled.