The past five years have not been kind to investors in most South African shares, with the JSE’s all share index delivering – on average – only 1.4% per year during this time, much less than inflation.

But the local market would have looked so much worse without a handful of mining shares.

“They’re our own version of the FAANGM stocks,” Louw says, referring to the famed group of leading digital and tech companies: Facebook, Apple, Amazon, Netflix, Google/Alphabet and Microsoft. Together they have a market value of more than $6.5 trillion – almost a quarter of the total US market.

Their shares have continued to boom during the pandemic, as they benefit from its accompanying shift to digitalisation, and as more people work from - and entertain themselves at - home.

Still, SA’s AAGHIN shares have done far better: in the same period, they exploded by more than 427%. “Without AAGHIN, there was pretty much no growth from the JSE,” says Louw. 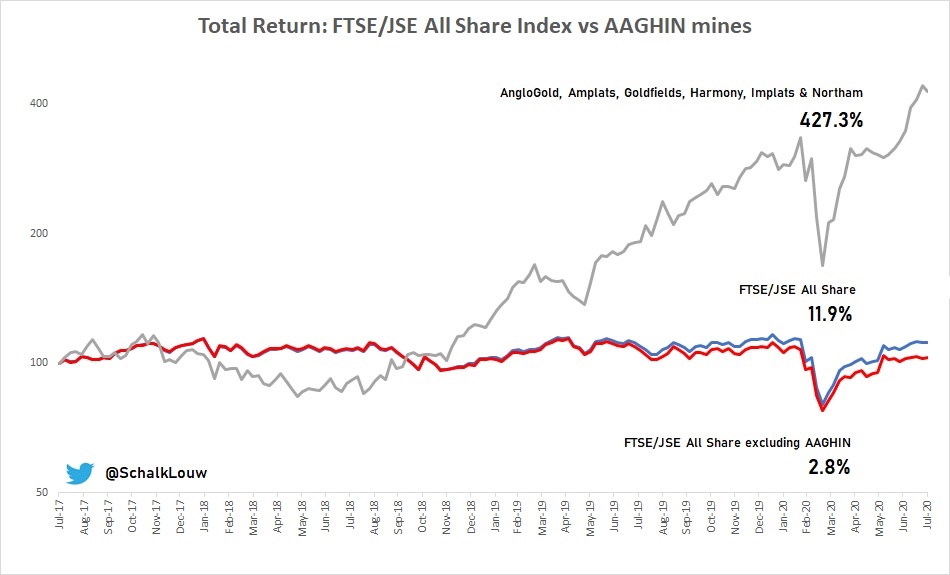 The grey line is the total return from the AAGHIN shares over the past three years, compared to the blue line, which is the JSE all share index return and the red line - the JSE without the AAGHIN shares.

Mining companies benefited from a weak rand (they earn their income in dollars, and pay costs in rands), but their gains were mostly due to strong metal prices. Most recently, gold has jumped to record levels, currently trading above $2,000/oz.

Investors are fleeing into gold – traditionally a "safe haven" investment - amid nervousness about the coronavirus pandemic.

If the world economy doesn't recover soon, interest rates will remain very low, which will hit the dollar, traditionally an investment competitor to gold.

Also, authorities will continue to pump new money into the US and European economies. And this kind of stimulus may over the long run create inflation, which is also good news for gold, which is considered a good hedge against inflation.

Louw isn’t a gold bull, but he says investors who bet against the current rally may do so at their peril.

READ | Gold is rocketing - and there are many ways to invest. But some experts are not biting

With the US central bank chief Jerome Powell recently vowing to do "whatever we can, for as long as it takes” to pump up the American economy, more stimulus can be expected, says Louw. Historically, there’s a close link between the gold price and the US money supply: the more money the US prints, the weaker the dollar, and the better for gold.

And unlike in past crises, investors can’t flee into government bonds, because they are not paying interest rates. Many of the world’s biggest countries are now offering negative rates on bonds. This means investors have to pay to lend governments money.

“There are just too many factors supporting gold to bet against it,” says Louw.

Local mining companies are also in excellent shape. In his thirty years on the stock market, the balance sheets of South Africa gold mines have never looked this solid, he says. “At the rand at its current level, these mines are currently printing money.”

Despite their massive rallies over recent years, the shares are trading at an average of 10.4 times future earnings – which is lower than the JSE’s historic average – and can’t even be compared to the FAANGM shares, which are at 44 times.

Related Links
Deutsche Bank says it will no longer invest in fracking or Arctic oil as banks turn away from...
A Russian company spilled 20,000 tonnes of oil in the Arctic Circle, turning a river red
Gold now costs R1 million a kilogram - and could climb even higher
Next on Business Insider
Middle Eastern states like Saudi Arabia will get a $1.3 trillion windfall from soaring oil prices - IMF