Blaise Kidasharira, 34, talks to INSIDER just feet away from the US-Canada border, before he crossed it illegally to seek asylum.
Marisa Palmer/INSIDER

Blaise Kidasharira stood at the end of Roxham Road, carrying everything he owned in two small bags.

It was barely dawn on a freezing October morning, and before he explained why he was fleeing for his life, he took a moment to apologize for his poor English, which was better than he realized.

"What I want: asylum from Canada," he told INSIDER, as he stood just feet away from the border between New York state and the Canadian province of Quebec. "What I want is just to be safe here, and maybe in a couple months or years to see again my daughters with a safe life. There is insecurity in my country."

He lifted a small keychain bearing a tiny photograph of his two young daughters and his wife. He said she died nearly one year ago.

Kidasharira, a 34-year-old former Doctors Without Border physician, described how a young man, a member of the "Imbonerakure" youth wing of Burundi's ruling party, had fired the bullet that pierced her liver.

"I saw the person who killed my wife," he said.

He said she died of septicemia, a bloodstream infection, weeks later.

Kidasharira said he was a member of the Tutsi ethnic minority, as was his late wife. He explained that the youth militia would hunt him down, and that he stood no chance in Burundi.

The only option was Canada, and the well-trodden path leading into it. A makeshift border-crossing from the US into Canada features a smoothed, dirt path lined with garbage bins and signs warning migrants in English to "Stop" and in French to "Arrêtez."
Michelle Mark/INSIDER

When asked about the family he had left behind in Burundi, Kidasharira said he was "suffering."

"This is my seventh day or sixth day in the US," he said. "I've been missing them and think about how they're doing. They're with my mom, actually, back in Africa, in Burundi."

In the last two years, tens of thousands of people have entered Canada illegally at locations like Roxham Road, many of them seeking asylum they believe is out of reach in the US.

Unable to cross legally at a port of entry - Canada is obligated under the Safe Third County Agreement to turn asylum-seekers back if they're already in the US - migrants like Kidasharira opt for Roxham Road, a quiet, dead-end road on the northern edge of upstate New York. Blaise Kidasharira, 34, tells INSIDER that he recently fled Burundi because he feared for his life after his wife was killed.
INSIDER/Marisa Palmer

David Gervais, an immigration attorney based in Plattsburgh, New York, has often encountered asylum-seekers like Kidasharira.

"It's a whole range of people. We've had people from California, Texas, Connecticut, and New York City, in New York state, all over the place. A lot of different ethnic groups," Gervais told INSIDER.

"It's just a whole medley of different folks from different backgrounds that feel they're not safe in the US anymore, or they're not going to have a fair chance at an asylum hearing in the US. So they're going to try their chances in Canada."

Kidasharira told INSIDER he disliked the US, and believed Canada was his only option. 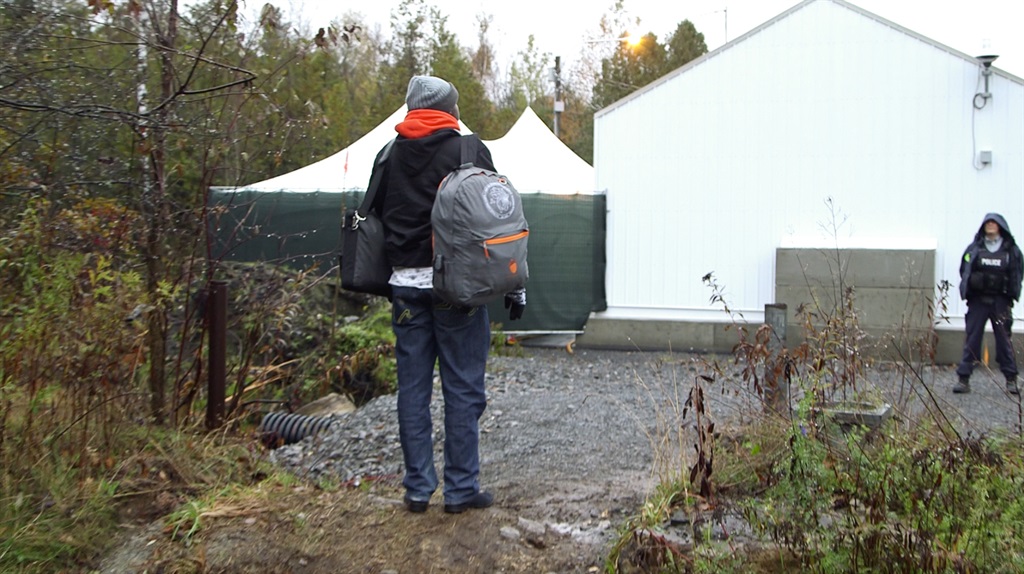 Kidasharira stands at the US-Canada border, as the Royal Canadian Mountain Police warn him that crossing the border is illegal.
Marisa Palmer/INSIDER

It's unclear what fate awaits him in Canada - though asylum-seekers are entitled to due process and allowed to explore all of their legal options, the country has said it will deport migrants who aren't eligible for protections.

Of the nearly 40,000 people who have crossed illegally into Canada since the start of 2017, Canadian authorities have deported just 398 as of September 2018. But that number could still rise, especially as migrants continue trickling in through Roxham Road.

"Canada is a beautiful country, it's a peaceful country," Kidasharira said as he walked toward the border, ignoring the multiple signs warning that the ditch was illegal to cross.

"I have no fear," Kidasharira said, just before he crossed into Canada.