Making microwave popcorn in the office is an act of olfactory war – unless you are willing to share with everyone in range of the uniquely enticing smell. So, in the interests of peace, Business Insider South Africa made four batches of popcorn, more than enough for a dozen people to snack on, then got them to rate the goods while they were at it.

We found that there is little to choose between some of the most popular brands of microwave popcorn in South Africa, yet somehow one managed to stand out, at least in average scoring.

Judging by our test of popcorn from Pick n Pay, Act II, Ster Kinekor Poz, and Woolworths, imported Hungarian popcorn with local cinema branding is tops – and it is not worth paying the premium for imported American popcorn.

We also found that a fancy box, while nice especially if your office lacks crockery, doesn't seem to affect taste.

In each case we scrupulously followed the instructions to listen at the door of the microwave and stop the cooking as soon as pops came less than one second apart – something we're less disciplined about outside formal tests. (Unsurprisingly, this resulted in no burnt popcorn among our test samples.)

Our panel of 12 tasted the popcorn from plain, identical bowls marked "A", "B", "C", and "D" shortly after it had been made and cooled down to roughly the same warm-but-not-hot temperature.

Our test pitted "salt" or "salted" flavour popcorn brands against one another, with no further additions. Our group universally agreed, unprompted, that the difference was due to the level of saltiness they tested, with no difference in consistency or oiliness.

Here is how competing brands of microwave popcorn stacked up. Act II, which is proudly made in the USA, is a common sight on South African supermarket shelves. Why, is not entirely clear.

In terms of price Act II stands head-and-shoulders above the rest of our test group. Normalising its price to a 100g equivalent pack (it sells in units of 85g) it costs R19.40 – just about 30% more expensive than the next most expensive popcorn we tried.

According to our testing panel, that high price does not equate to anything special: Act II received the lowest score from our panel, albeit just barely. Only one person scored it at less than 5 out of 10, but nobody was particularly impressed either. 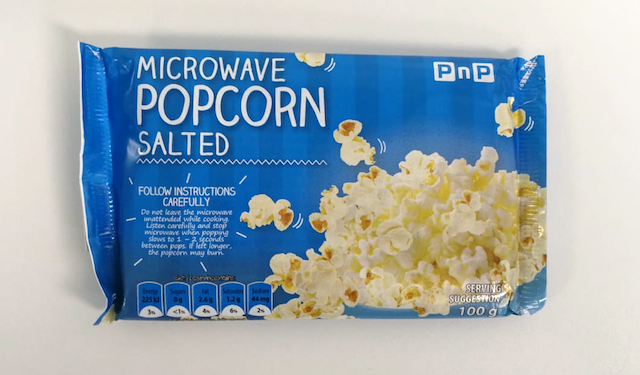 Pick n Pay's own-brand microwave popcorn was the second most expensive in our test, and fared the second worst, but just barely on both counts.

At R14.99 for a single 100g pack, PnP was only 5% more expensive than our cheapest sample, which amazingly was from Woolworths.

In taste too our panel could, on average, hardly tell the difference between the Pick n Pay brand and competitors from Woolworths and Ster Kinekor, and only one person scored it at less than 5 out of 10. Woolworths offers an innovation that makes its popcorn stand out logistically: a pop-up box that is easy to handle hot and precludes the need for crockery if you don't want to eat out of an oil-covered bag.

That comes at no extra cost. Quite the contrary, in fact: at R42.99 for a pack of three, Woolworths was the cheapest in our test when normalised to 100g.

Our test group, however, did not have the benefit of the pop-up box, and on average could see little difference between the Woolworths offering and those from Pick n Pay and Act II. The popcorn branded with the name of a South African cinema chain has little to do with Ster Kinekor. It is actually made in Hungary, and the Ster Kinekor name does not appear on the actual microwave popcorn bags, just on the box they are packed in.

But Ster Kinekor apparently imports a decent microwave popcorn. Our testers scored Popz around 10% higher than the average of the three other brands, and not a single taster rated it at below average.

"If it makes you feel like you are at the movies, it does a great job," said one tester – without knowing the brand name.

We paid R37.99 for a three-pack of 85g each, making for a normalised price of R14.90 pr 100g, slightly cheaper than Pick n Pay and a little more expensive than Woolworths.

Verdict: Ster Kinekor takes the crown – but if you season to personal taste it doesn't really matter.

Our tasting cohort found no difference other than saltiness between the different brands, and several commented that they missed their favourite flavour, ranging from Aromat to chives. With the price being virtually the same, excluding Act II, that suggests you'll probably want Ster Kinekor Popz if you are going to eat your salted popcorn neat – but a sprinkle of your favourite popcorn topping will make a bigger difference than the brand of popcorn you buy.