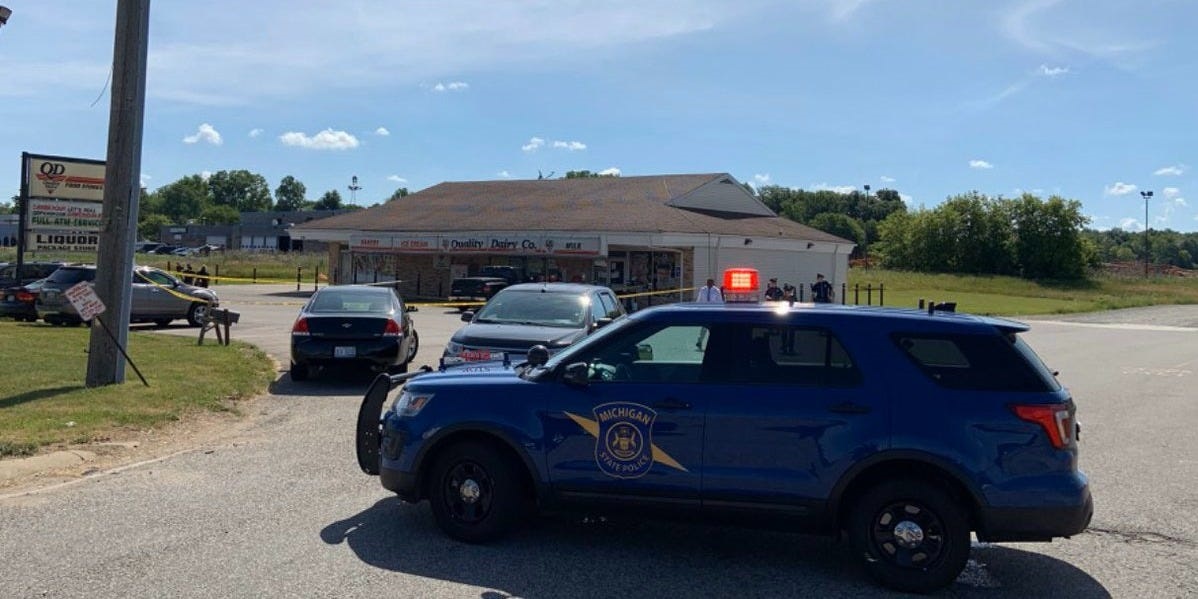 A man in Michigan was fatally shot by a sheriff's deputy after an altercation at a convenience store where he stabbed a customer who had confronted him for not wearing a mask, officials say.

The man who was killed was identified by the Eaton County Sheriff's Office as 43-year-old Sean Ernest Ruis.

Michigan State Police said that Ruis was inside a Quality Dairy in Windsor Township, Michigan, at around 6:45 a.m. on Tuesday, not wearing a mask.

The store refused to serve Ruis and, at one point, a 77-year-old man from nearby Lansing confronted Ruis.

Ruis responded by pulling out a knife and stabbing the 77-year-old, police said. The 77-year-old was injured in the attack, though his current condition is unknown.

Ruis fled the scene, Michigan State Police said, and was stopped less than an hour later in Delta Township by an Eaton County Sheriff's Deputy.

Video of the incident shared by the Eaton County Sheriff's Office shows Ruis exiting the vehicle with a knife in hand. The deputy then backed up and told Ruis to drop the weapon, but he continued to advance, the sheriff's office said.

The deputy can be heard saying "drop the weapon" several times in the 10-second video.

The Sheriff's Office said the deputy then fired her gun at Ruis, who continued to approach her as she fired rounds.

"She backed away from him while repeatedly ordering him to drop the weapon, but he continued to advance and attack and she acted in defense of her life," the sheriff's office said.

The agency is investigating the incident and the deputy has been put on administrative leave, which is "standard procedure" when an officer is involved in a shooting, the sheriff's office said.

"Our thoughts and prayers are for the full recovery of the victim who was stabbed at the Quality Dairy and for his family, and are with our Deputy who was subsequently violently attacked," the sheriff's office said.