View from a room in Biyela Lodge in mFulaWozi. Photo: Andrew Thompson
Review

Both lodges channel a luxury experience common at many private concessions in the greater Hluhluwe-iMfolozi Park and elsewhere in South Africa - but with a backstory and community involvement the team hopes will give the destination more substance.

Central to the establishment of mFulaWozi is buy-in from Zulu chiefs who own the land on which it was built, all of whom are descendants of the Shaka dynasty. And Shaka's legacy still surrounds the reserve - a spring once used by Shaka still bubbles up close to Mthembu Lodge, and the remnants of his famous hunting traps are still on the property. The lodges are named after two chiefs who, together with others in the region, struck a deal with local businessman Barry Theunissen to 'unlock' land for a private reserve.

In 2010, Theunissen saw the potential to turn the 16,000 hectares of land surrounding the south-western corner of Hluhluwe-iMfolozi Park, previously used primarily for grazing, into a new private wilderness area.

With buy-in from Chief Mthembu and other surrounding chiefs, KwaZulu-Natal wildlife authorities, and the Ingonyama Trust, Theunissen developed the first two lodges in idyllic locations alongside the White iMfolozi River. A third tented camp, set on the Black iMfolozi, is also in the works.

View from a room in Biyela Lodge in mFulaWozi. Photo: Andrew Thompson

Theunissen believes the agreement - which took seven years to finalise - empowers those living in the surrounding communities, some of whom helped build the lodges. Many staff who helped lay lodge bricks have now pivoted to work in various new hospitality roles, from food and beverage to providing spa treatments.

Half of park entrance fees from the private reserve also go towards community initiatives, like expanding community gardens. Over time, the bigger goal is ultimately to transfer part of the ownership of the physical lodges back to the community.

"As the lodges establish themselves, the community can start buying back parts of the lodge," says Theunissen. "Once the income stream is reliable, the community will start taking some of the ownership back, which will free us up to roll some of that cash into other initiatives like the new tented camp."

It's a compelling story, but mFulaWozi still focuses on being an exclusive safari destination in the heart of the KwaZulu-Natal wilderness - albeit with competitive South African rates.

Attention to high-end luxury is apparent on walking into either of the lodges currently available for booking. Though distinct in their styling and layout, both epitomise the luxury safari aesthetic. 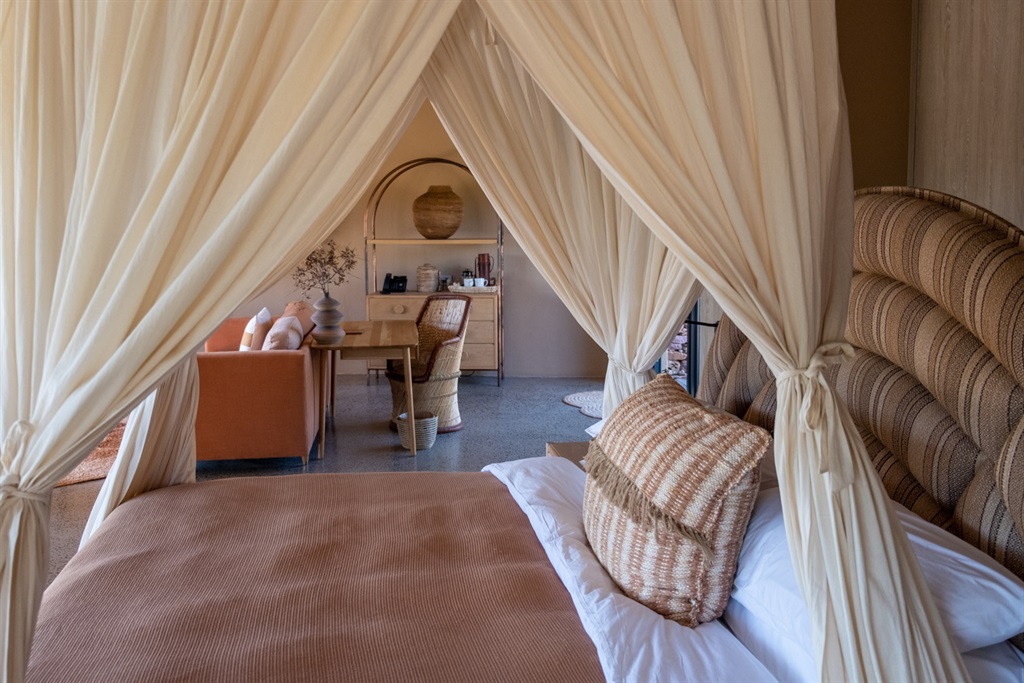 Mthembu Lodge, which sits just metres from the banks of the White imFolozi, is more earthed in its location, nature, and hues. Rooms, though spacious and well-appointed, are decorated in neutral, earthy tones, and spa treatment rooms are in traditional Zulu rondavels.

Biyela Lodge juxtaposes this - rooms hover on cliffs upstream of the same river and have more dramatic interiors, private plunge pools, and floor-to-ceiling glass walls leading to large balconies from which to take in a sunrise set to the gurgling waters below.

Wildlife is also key to the reserve's appeal, and the now-dropped fence to neighbouring Hluhluwe–iMfolozi, home to the Big Five, is starting to see animals venture across. But without the pressure of public vehicles and those from neighbouring concessions, and an adjacent wilderness area of 35,000 hectares where there are no roads or infrastructure at all, animals at mFulaWozi still look upon humans and vehicles with a healthy dose of suspicion - lending the reserve a wild, untapped edge.

"That's the beauty of what we have here," says Theunissen. "We don't know what we'll get with animals on any one day. It's not contrived with ten-minute viewing slots. You take what you get - you might have the Big Five in one day, you might not. And if you want to stay at a sighting all morning, you can." mFulaWozi has opened up 6,000 of the 16,000 hectares available, and this is more than enough land for guides at both lodges to traverse without encountering any other vehicles.

Although still skittish, buffalo, elephant, rhino, waterbuck, kudu, zebra, and impala, are all common on the reserve's roads. And predators, though more elusive, are starting to make themselves known. African Wild Dogs sometimes make their way through this section, and a pride of lions, and some nomadic males, are also frequently spotted. Leopard prints outside Mthembu lodge one morning demonstrated that one of Africa's most revered predators is also getting more comfortable in the presence of humans. But it's also the less obvious insights shared by guide Lungelo Mzulwini that added colour to the game drives. He shared stories about how some in the Zulu community use the buffalo thorn to collect spirits after death; how the green wood-hoopoe is also called iNhlekabafazi in Zulu, owing to the bird's call sharing a vague resemblance to laughing women. And, with a hint of a smile, Mzulwini pointed to a small pink flower and told us how it was the variety favoured by many young girls, who'd place them behind their ears, when he was growing up.

At mFulaWozi, there's as much value in the animal sightings as in the region's history and the landscapes. And as with the greater Hluhluwe-iMfolozi Park, there's no shortage of lush rolling hills, ancient trees, long meandering rivers, and tales of Zulu hunters who moved through these lands generations before to muse over while sipping on a perfectly cliched sundowner.

Related Links
You can track pangolins and find rare animals, plants, and birds at this Big 5 reserve in SA
Tourists can now fly direct from Kruger to Victoria Falls - and skip SA cities entirely
TAKE A LOOK | This refurbished 5-star lodge near Victoria Falls reopens in March
Next on Business Insider
Qantas confirms it will fly Joburg to Perth again in November, reconnecting SA expats