Memes joking about World War III and avoiding a draft are going viral, but so are angry counter-tweets about civilians at risk in the Middle East 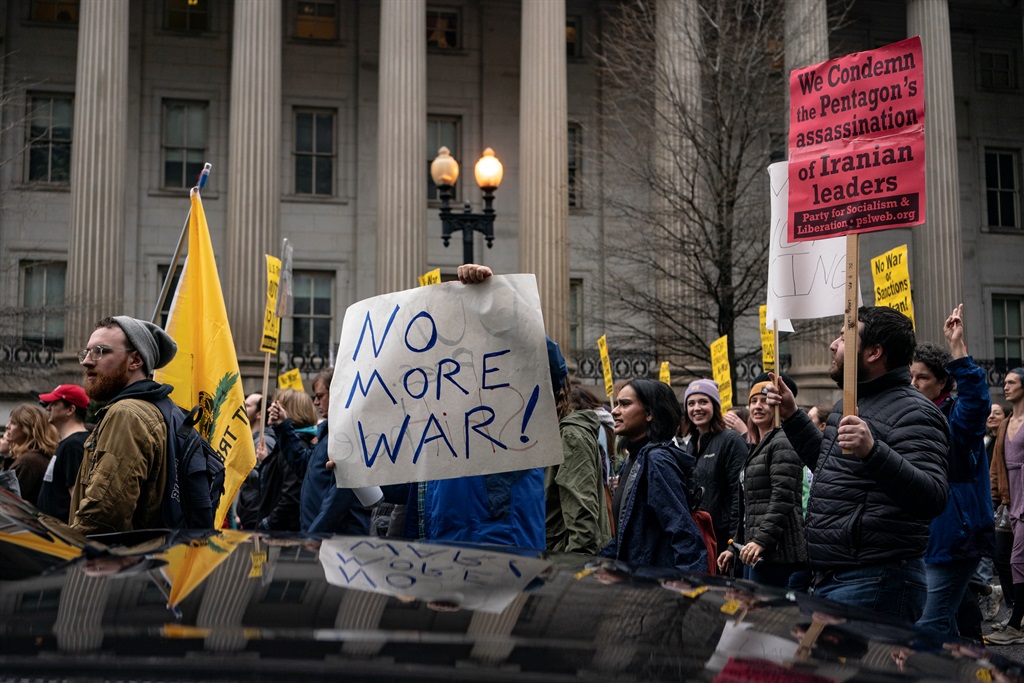 Anti-war demonstrators march during a demonstration against war in Iraq and Iran outside the White House on January 4, 2020 in Washington, DC. Demonstrations are taking place in several U.S. cities in response to increased tensions in the Middle East as a result of a U.S. airstrike that killed an Iranian general last week.
Photo by Alex Edelman/Getty Images

A meme cycle follows nearly every major news cycle, with social media platforms flooded with jokes about everything from President Donald Trump's impeachment to YouTuber drama.

The news that a US airstrike in Iraq killed a top Iranian general was no different, prompting a massive meme cycle about the possibility of an impending World War III. Viral posts quickly began circulating, making light of draft-dodging and Americans fighting a war in Iran.

But not everybody was laughing. The memes were met with their own wave of backlash that criticised Americans in particular for joking about US military action that could largely affect civilians in the Middle East.

"Americans are making a joke out of something that will kill millions here in the Middle East," says one tweet that quotes a joke about going to the trenches in World War III. "Our lives are in danger. We're worried about our future. This is disgusting."

Americans are making a joke out of something that will kill millions here in the Middle East. Our lives are in danger. Weâ€™re worried about our future. This is disgusting. https://t.co/T6mzbYfAli

Not all the counter-tweets specifically attacked meme-makers, but they did attempt to draw attention to the past realities of war. Memes have been in use online since the early 2000s, but the meme cycle as it exists today is unlike anything in a previous period of American wartime.

The counter-arguments addressed the realities of military conflicts for people of colour both in the US and abroad, where the violence takes place.

"[T]his war will likely bring another wave of islamophobia and xenophobia against anyone visibly brown just like after 9/11 so we should probably be more worried about that than getting drafted," said one viral tweet, referring to the popularity of draft-dodging memes.

Many of the criticisms were met with the memes' audience saying they were using humour to cope with fear and anxiety about war, but that justification didn't resonate with detractors who said the fear and anxiety would be felt by people who were affected by the violence itself, and not by choice.

yeah ngl this â€˜we joke to get us through traumaâ€™ thing ainâ€™t applicable this time lol, it is not your trauma to joke about

"[Y]ou as a western living in europe, america or austalia [sic] have nothing to cope with!" read one response. "war will never touch you! american wars never touch american soil, its poor people in the global south who will pay for it in their blood and in their lives and dreams!"

"jokes are how we cope" you as a western living in europe, america or austalia have nothing to cope with! war will never touch you! american wars never touch american soil, its poor people in the global south who will pay for it in their blood and in their lives and dreams!

Not all of the World War III memes and jokes were as offensive as cavalier attitudes toward bombing civilian populations, but they all got lumped in together in trending hashtags and by algorithms on apps like TikTok.

Perspectives of social media users who live in the global south joined the conversation, showing how memes and jokes for and by US-centric audiences are perceived globally.

Some social media stars with large platforms joked about the possibility of a draft, including James Charles, who tweeted several photos of himself in drag with the caption, "me when the government comes knocking on my door for the draft."

me when the government comes knocking on my door for the draft pic.twitter.com/gitX4Q1qHi

His tweet drew several different lines of criticism, including from people questioning whether it was appropriate for him to joke about pretending to be a woman in light of the Trump administration's ban on transgender service members.

"[J]ust to clarify, this tweet has nothing to do with the trans military ban, which I obviously do not support," he wrote in a reply. "[I]t's a lighthearted joke regarding the fact that I had to register for the draft when I turned 18, just like every other boy, & i don't wanna fight in a war. that's all"

As protests and demonstrations against military action in Iran took place across the US the weekend after the Trump administration's airstrike in Iraq, some tweets urged people who were joking to stop the memes and contact their elected representatives to express their anti-war sentiment instead.

War is not a fucking joke. It is a destructive and selfish act. 4,424 U.S. soldiers and an estimated 600K Iraqi civilians died in the Iraq war over WMDs that did not exist. So please stop with these #WWIII memes and instead call your Congress members and tell them #NoWarWithIran.

Related Links
US border patrol denies Iranian-Americans were detained at the border amid ramped-up threats from...
US president Donald Trump was reportedly given a 'menu' of options for the Iran strike that...
Iran's 'forceful revenge' against the US is likely to include cyberwarfare, and experts warn that...
Next on Business Insider
SA’s security companies are getting special rules for using drones, with 6 months to comply