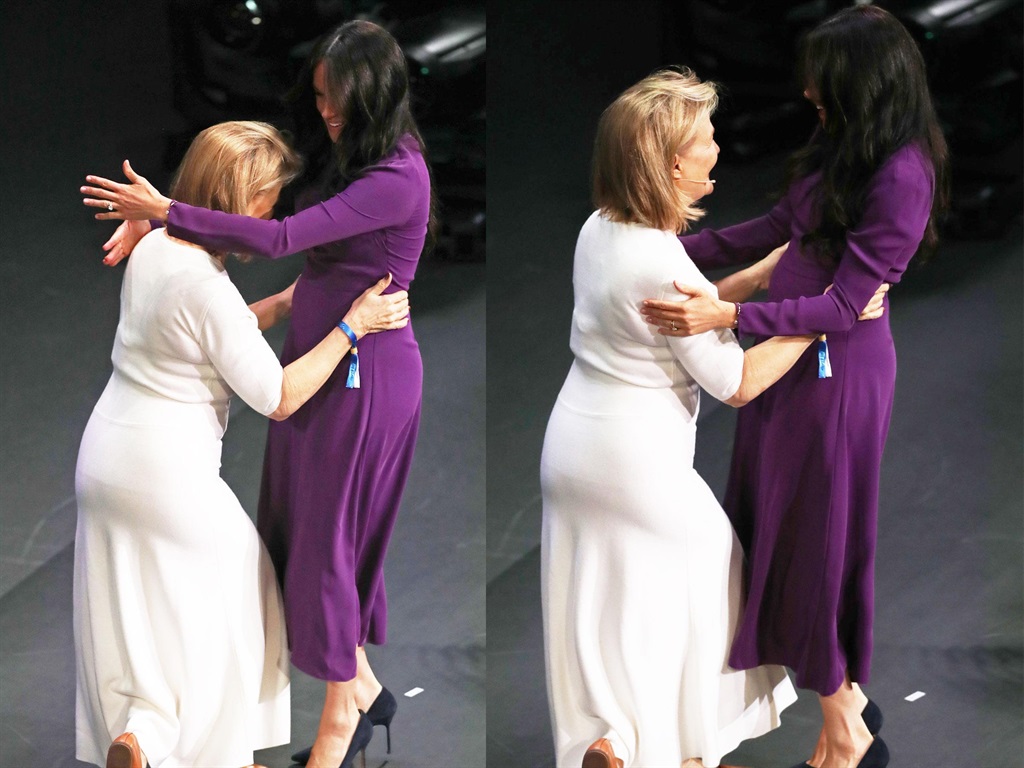 From the ongoing rumours of a rift in Prince Harry and Prince William's relationship to the intense attention on her own painful words about life as a royal, it has not been an easy week for Meghan Markle.

But the Duchess of Sussex had a lighthearted moment on Tuesday night as she insisted on hugging a presenter who tried to greet her with a curtsy.

Markle had just walked onto a stage in front of more than 2,000 people for the One Young World Summit's opening ceremony at Royal Albert Hall in London.

A video posted to the official @sussexroyal Instagram account showed the moment Kate Robertson, one of the founders of the nonprofit, began to dip into a curtsy to greet the duchess.

But Markle had already walked onstage with her arms outstretched, preparing to embrace Robertson, who she has known since joining the charity in 2014.

The duchess appeared to shake her head "no" as Robertson began to curtsy, instead pulling her up to complete the hug. Meghan Markle at the One Young World Summit in London on Tuesday.
Gareth Fuller - Pool/Getty Images It was a sweet moment for Markle, who was attending her first public appearance since her and Prince Harry's ITV documentary, "Harry & Meghan: An African Journey," aired in the UK on Sunday. Both the duchess and Prince Harry were incredibly candid in their interviews for the film, speaking at length about their struggles with the intense attention that has followed their relationship.

Markle revealed that when she first began dating Prince Harry, some friends warned her to end the relationship.

"My British friends said to me, 'I'm sure he's great, but you shouldn't do it, because the British tabloids will destroy your life,'" she recalled.

"And I very naively - I'm an American and we don't have that there - said, 'What are you talking about? That doesn't make any sense! I'm not in tabloids!' I didn't get it." It was Meghan's first public appearance since her and Prince Harry's documentary "Harry & Meghan: An African Journey" (pictured) aired in the UK on Sunday.
ITV News Royals, Instagram

Markle also revealed that although she "really tried to adopt the British sensibility of a stiff upper lip," she has struggled with the ongoing scrutiny.

"It's not enough to just survive something, right?" she said. "That's not the point of life. You've got to thrive, you've got to feel happy."

Shortly after the documentary aired, it was reported that Queen Elizabeth II and Prince William were concerned for the Duke and Duchess of Sussex.

There were also rumours that Markle and Prince Harry might take a sabbatical, or even a permanent departure, from their royal roles. But Markle appeared to put that behind her, at least briefly, as she stepped out on Tuesday night.
Samir Hussein/WireImage/Getty Images

But Markle appeared to put that behind her, at least briefly, as she stepped out on Tuesday night.

The duchess was all smiles and looked glamorous in a long purple Aritzia dress that she previously wore while pregnant with baby Archie back in January. The duchess was all smiles and looked glamorous in a long purple $49 Aritzia dress that she previously wore while she was pregnant with baby Archie back in January (pictured).
Karwai Tang/WireImage/Getty Images

And the summit was the perfect place for Markle to step back into the spotlight after an especially difficult month.

The duchess has been working with One Young World since 2014, two years before she started dating Prince Harry, when she was named a Counsellor at the 2014 Summit in Dublin and spoke to the young attendees about equality and women's rights.

After she became the Duchess of Sussex, Markle was allowed to maintain her ties with the nonprofit, which has since partnered with the Queen's Commonwealth Trust.

"It was very difficult for Meghan to close the chapter on her previous passions, so she's been excited to be able to join One Young World again this year in London," a friend told Vanity Fair this week.

"Inspiring young people is so important to her and she's been able to tie her Vice-Presidency of the Queen's Commonwealth Trust into a really impactful program with One Young World, a charity that has been dear to her heart for more than five years."