Rupert Murdoch with his sons Lachlan Murdoch (L) and James Murdoch (R) at his 2019 wedding to Jerry Hall.
Photo by Max Mumby/Indigo/Getty Images
The Murdoch family's nearly R300 billion fortune comes from a media empire that dates back to the 1950s. Rupert Murdoch, the patriarch of the family, inherited a chain of Australian newspapers from his father, who was a war reporter turned publisher, in 1952. At the time, Murdoch was 22 years old and had just graduated from Oxford University.

He included scandalous stories in his papers which helped with sales. The early success allowed him to expand quickly. He started Australia's first nationwide newspaper, The Australian, in 1964. By the 1970s, he was purchasing titles like the UK's News of the World and The Sun. He founded Fox News in 1996.

When Murdoch entered media markets for the first time, part of his strategy was to publish salacious content that others wouldn't — perhaps most famously in the form of the topless women on the third page of The Sun. Years later, his English newspaper holdings were embroiled in a major voicemail hacking scandal — earning him the nickname "the dirty digger" from the satirical news show "Private Eye."

Murdoch's name is synonymous with media and influence. He has built an empire that comprises Fox News, The Wall Street Journal, The Times of London, and other networks and newspapers all across the world.

As he entered his late 80s, his succession plan emerged as a question.

Over the span of his five-decade career, he has been married four times and fathered six children, many of whom are involved in the family business.

Murdoch sold 21st Century Fox to Disney for $71.3 billion in 2019, netting $12 billion that he then distributed equally between his six children.

His two sons, James and Lachlan, have long been considered the most likely to step into Rupert's shoes, but James just took himself out of the running by leaving the board of News Corp. citing "disagreements over certain editorial content." Beforehand, James had lost out to Lachlan in the race to take over at the famously conservative Fox News.

Here's a breakdown of who's who in the Murdoch family:

James Murdoch, once the heir apparent, recently resigned from the board of News Corp. James, Rupert Murdoch's 47-year-old son, resigned from News Corp.'s board of directors on July 31. His resignation was included in a regulatory filing.

"My resignation is due to disagreements over certain editorial content published by the Company's news outlets and certain other strategic decisions," Murdoch wrote in a two-sentence resignation letter.

His resignation came six months after James had slammed News Corp. and Fox News for their coverage that promoted climate change skepticism amid the Australian brush fires. James is far more liberal than his father — he and his wife Kathryn recently donated more than $1 million to Joe Biden's presidential campaign. They have been married since 2000 and have three children.

In his new book, "Hoax," CNN's Brian Stelter reported that James once likened Fox News to a "sinking ship" and said "some of the 'rats' would drown while others would scurry off," the Daily Beast reported. An excerpt was also published in Vanity Fair. He also reportedly criticized the "alternative reality" that Fox News created, and how his brother Lachlan allowed for that to continue.

Before his departure, James was considered a likely successor to Rupert Murdoch, as the CEO of 21st Century Fox from 2015 until 2019, when it was sold to Disney. He had been involved in the family business for most of his adult life.

James opened his own investment firm, Lupa Systems, last year. The firm just invested in the global art fair platform that owns Art Basel, landing Murdoch a board seat. He also serves on the board of directors at Tesla, and was at one point reported to be the top candidate to replace Elon Musk as that company's chairman, before Robyn Denholm took the spot.

According to Stelter, "every step James took in the outside world burnished his reputation with an eye toward a shareholder fight in the future" to win control of the family business.

Lachlan Murdoch is now seen as the most likely to succeed Rupert Murdoch.

After the Disney deal closed, Lachlan was named chief executive of Fox Corporation, the arm of the Murdoch media empire that contains Fox News and Fox Sports, marking perhaps the final stage of the contest between the brothers to take over their father's empire. (He and James have leapfrogged each other multiple times.)

Lachlan had started out overseeing a chain of Australian newspapers at 22 years old, and by his late 20s, he had risen to to be the deputy chief operating officer of News Corp. Other executives "viewed him as entitled," according to The New York Times. He left the company in 2005 at the age of 33, interpreted at the time as a sign that James had taken the lead. But Lachlan was brought back into the fold by 2015.

Together, James and Lachlan ousted Roger Ailes, a Fox News cofounder, after claims of sexual harassment in 2016. Stelter reported in "Hoax" that Murdoch insiders have speculated that upon Rupert's death, Lachlan's three siblings would "wrest control of Fox News" from him by using their power as shareholders to vote him out, according to the Daily Beast. Lachlan is described in the book as "hands-off" in his approach to Fox News' programming.

Lachlan has been married to Australian model Sarah O'Hare since 1999. They have three children. Stelter calls him a "soccer dad."

Elisabeth Murdoch is involved with the family business, but was further removed from the battle for succession between Lachlan and James. Elisabeth, 51, is a media mogul in her own right. She owned and ran her own television production company, Shine, in the UK before selling it to her father for £415 million in 2011. The sale netted her a News Corp. board seat and £153 million. She also cofounded Sister, a global production company.

She has four children: two with her first husband Elkin Pianim and two with her second husband Matthew Freud. She married a third time, to artist Keith Tyson, in 2017.

James, Lachlan, and Elisabeth all have the same mother. Rupert Murdoch with children Lachlan, James, and Elisabeth, along with second wife Anna Murdoch at their home in New York City in 1989.
Peter Carrette Archive/Getty Images

Rupert married the Scottish journalist Anna Murdoch Mann in 1967 — his second marriage. They divorced in 1999. Together, they had three children: Elisabeth, Lachlan, and James.

Rupert also had a daughter from his first marriage. In their divorce settlement, Anna Murdoch Mann fought for those four children to be the only beneficiaries of the family trust.

Prudence Murdoch is Rupert's oldest, and the only child from his first marriage. 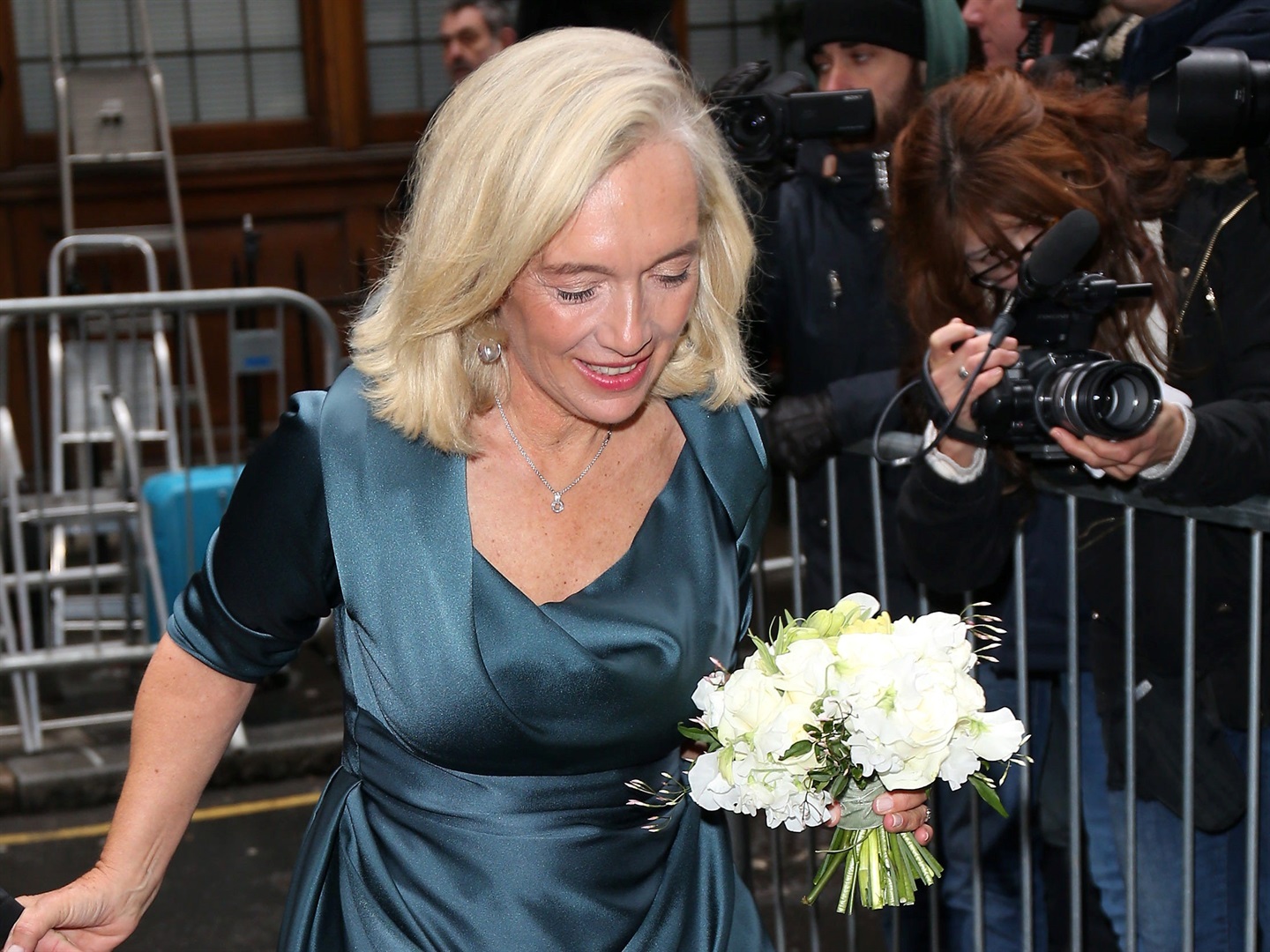 Prudence's mother was Australian model Patricia Booker. Booker and Murdoch married in 1956 and divorced in 1966.

Prudence, 62, has mostly steered clear of the succession battle, but she and her husband, Alasdair Macleod, are both involved with Murdoch businesses. They have three children.

A 2008 Vanity Fair profile referred to her as "the child Murdoch is most comfortable with — or at least the child who is least afraid of him." Deng, now 51, is 37 years Rupert Murdoch's junior. They met while she was working as an executive at a Murdoch-owned network in Hong Kong. She was also an advisor for China's Myspace outfit and a film producer.

The pair married in 1999, aboard Murdoch's yacht, just weeks after his divorce from Anna Murdoch Mann was finalized.

James and Lachlan reportedly tried to talk their father out of marrying her. They remained married for 14 years. Their split was reportedly due to rumors of a relationship between Deng and former Prime Minister Tony Blair.

She has also had a friendship with Ivanka Trump. The Wall Street Journal reported, after Murdoch and Deng divorced, that US counterintelligence officials had warned Jared Kushner that Deng could be using the friendship to "further the interests of the Chinese government," citing people familiar with the matter. Grace and Chloe, who are beneficiaries of the Murdoch trust but do not have voting power, are now 19 and 17, respectively. They are the last of Murdoch's six children. Their godparents are Nicole Kidman and Hugh Jackman.

Hall, 64, a former model and actress from Texas, is Murdoch's fourth wife.

The two met while she was playing Mrs. Robinson in a stage adaptation of "The Graduate" in Australia. She was previously Mick Jagger's partner, with whom she shares four children. Another notable former partner of hers was Roxy Music frontman Bryan Ferry.