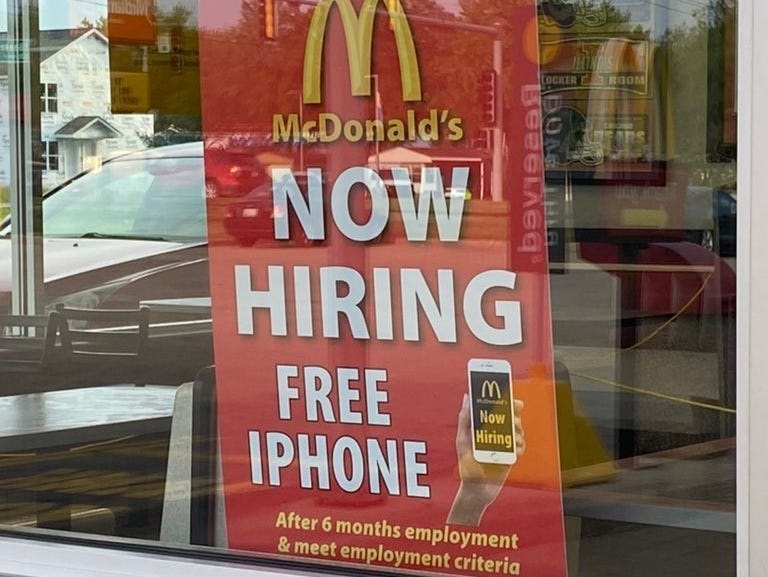 A McDonald's restaurant is offering free iPhones to new hires.
@brogawd_ on Twitter

A McDonald's restaurant in Illinois that is desperate to attract staff is giving away iPhones to new recruits if they stay for six months.

A viral photo shared by Twitter user @brogawd_ shows a sign placed in the window of a restaurant reading: "Now hiring. Free iPhone."

The sign adds that staff need to work at the chain for six months and meet certain, unspecified "employment criteria" to be eligible.

A staff member at the restaurant in Altamont, Illinois - close to Effingham - confirmed to Insider that the sign belonged to the store. A restaurant manager was not available to explain the employment criteria for getting the phone.

A McDonald's spokesperson told Insider on Tuesday that the fast-food chain was ramping up recruitment, though they added that this often happened during the summer. It said that individual restaurants were offering a range of benefits including pay incentives, such as appreciation pay, sign-on and referral bonuses, and paid time off.

Insider later asked McDonald's for comment on the Altamont, Illinois restaurant's iPhone giveaway, and the eligibility criteria, but did not immediately receive a response.

The fast-food industry has a crushing labor shortage, causing restaurant chains such as Subway and Dunkin' to cut opening hours and close dining rooms.

Chipotle, Taco Bell, and others are offering lucrative perks such as cash bonuses, raises, and education benefits to attract new staff. The McDonald's restaurant on Penn Ave in Sinking Spring, Pennsylvania, is using its $15 wage to lure in new staff.
Ben Hasty/MediaNews Group/Reading Eagle via Getty Images

One McDonald's in Tampa, Florida even offered $50 to anyone who came in for a job interview. The owner of the location told Insider's Kate Taylor that restaurants were "scrambling for help" and that hiring was harder than it had been in decades.

Hiring in the US private sector accelerated through April, aided by the vaccine rollout, but some industries have still been hit by huge labor shortages.

Insider's Ayelet Sheffey reported that shortages could be caused by a mix of unemployment benefits, Covid-19 health concerns, caring responsibilities, and low wages.

Bank of America expects this worker shortage to fade by early 2022.