Chilli cheese fries - RocoMamas (left) and McDonalds.
McDonalds has launched a chilli cheese fries option for R34.90, as part of a "winter warmers" deal. The launch was followed by a cheeky Renaissance-esque advert campaign on Twitter. McDonald's cheecky new ad that says: You say you're an independent woman, but you can't buy yourself Chillie Cheese Fries. How beyps?

What caught our attention though was not the advertising campaign but a "food fight" between McDonalds and RocoMamas, which also sell chilli cheese chips, but for R40.00.

They find themselves in our kitchen, so let's see if they can take the heat ?? https://t.co/I12Qzmd3gt

We were more interested in the good, though, so we put our taste buds to the test.

We looked at everything from cost to cheese and chilli flavour impact, and here is how the chilli chips from McDonalds and RocoMamas compared: The service at McDonalds was faster - marginally.

If your decision hinges on time (important to consider when you need to get your fix between meetings), the service is not all  that different. We timed the service from the moment the order was placed to when we paid and left the counter.

McDonalds came out the winner at 4 minutes 52 seconds, but RocoMamas came in only a tad slower at 5 minutes 3 seconds. 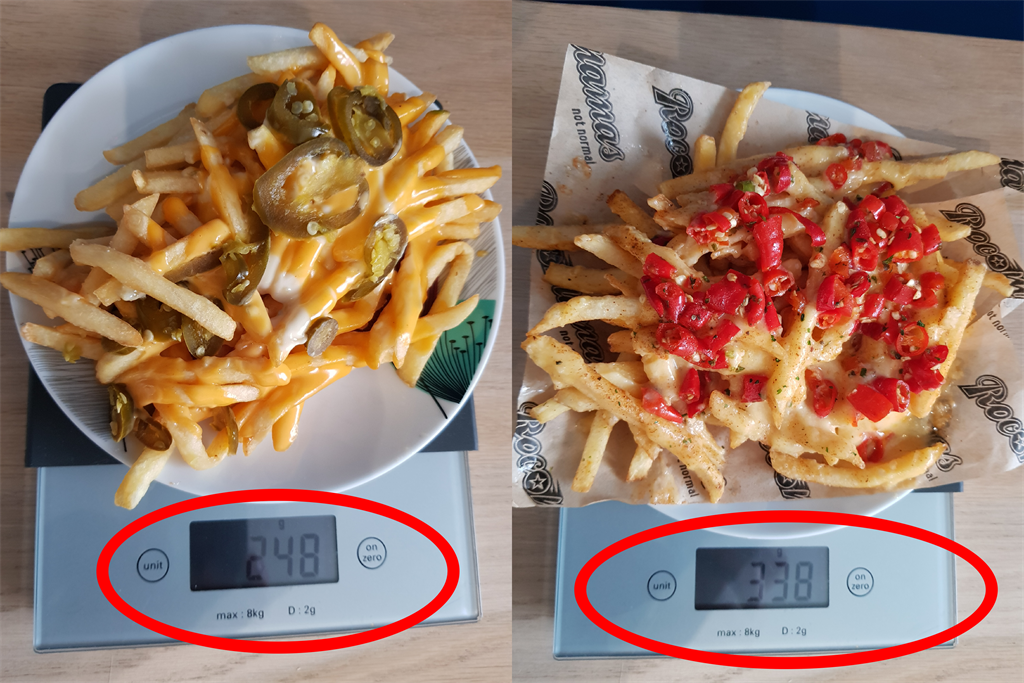 The McDonalds' chilli cheese fries cost R34.90 and the serving portion is 248g. This puts it in between their normal large chips (R19.90 for 220g) and extra large fries (R24.90 for 260g). So for roughly R10 more you are paying for the topping. This is about the same mark-up RocoMamas charge between their medium shoe string fries and their chilli cheese fries.

The best presentation was from RocoMamas, which put in that little extra.

RocoMamas put more care to their meal presentation, including a healthy portion of finely-diced red chillies, a good slathering of cheese sauce, along with sprinklings of herbs. McDonalds diced up a few jalapenos and slathered their chips in cheese sauce.

McDonalds redeemed itself by winning on cheesy goodness. Our taster liked McDonalds' cheese sauce much more than RocoMamas, but mentioned that the cheese sauce tasted processed. They also noted there was a fair bit of mayonnaise in the cheese. Overall there was plenty of cheese sauce all the way down to the last chip.

On the other hand, RocoMamas’ cheese flavour tasted much more genuine, but could have done with a bit more punch, being overpowered by the chilli.

But when it came down to the chilli in chilli cheese, McDonalds lacked that important kick. RocoMamas won hands down in this category. Its fries were dripping with chilli bang from the actual chillies through to the salting. It was hot and spicy the whole way through, enough so to leave our taster sweating.

McDonalds' chips had little to no kick, apart from the jalapeno slices.

Our taster ultimately decided that while McDonalds's chips were good in a cheesy sort of way, they lacked that ever so important chilli kick. If you’re looking for something that’s cheesy with a slight bite this is your meal.

But, if you are looking for something that will leave your taste buds tingling and crying for milk, RocoMamas would be your best bet.

Related Links
I tried the weirdest of ‘SA’s most instagrammed’ burgers – and it was meh
SA can't get enough of RocoMamas 'smashburgers' - and now they're heading for India and the...
We tried chips from McDonald's, Steers and other takeaway joints - and the winner was clear
Next on Business Insider
TAKE A LOOK | The disappointing reality of a royal event celebrating the Queen's Platinum Jubilee