This aerial view taken on August 8, 2020 shows a large patch of leaked oil and the vessel MV Wakashio off the coast of Mauritius.
STRINGER/AFP via Getty Images

A major attempt to protect Mauritius and the Indian Ocean from the 300-metre MV Wakashio oil spill is underway.

The ship ran aground off the coast on July 25 carrying 4,000 tons of oil. The fuel started to leak last week when the ship's hull cracked, CBS News reported, causing major damage to the island known for its coral reefs and marine wildlife.

The Associated Press reported that more than 1,000 tons of fuel had already leaked into the sea, and with the high winds and waves, environmentalists, residents, and government officials worry the ship could split and unleash the remaining oil.

Here's a look at the damage the oil has caused in Mauritius so far.

The MV Wakashio ran aground off the coast of Mauritius on its way to Brazil from China on July 25.

Government officials and environmentalists are actively working to stop 4,000 tons of fuel from leaking from the ship.

Aerial and satellite images showed the size of the spill tainting the blue waters of the Indian Ocean.

The oil leaking into the ocean near Mauritius could have devastating effects on the environment. The island issued a "state of environmental emergency" on August 7. France sent assistance from nearby island Reunion with military crafts and booms to help contain the oil. Japan has also said it will send a six-member team to help with relief efforts. Mauritian Wildlife Foundation manager Jean Hugues Gardenne told the Associated Press that they are "expecting the worst" and that the ship could potentially break in half in two days. "So much oil remains in the ship, so the disaster could become much worse. It's important to remove as much oil as possible. Helicopters are taking out the fuel little by little, ton by ton," Gardenne told the AP. Oceanographer and environmental engineer Vassen Kauppaymuthoo told AFP that it may already be "too late" to contain the leaking tanker. "If the ship breaks in two, the situation will be out of control," he said.

"We're talking about a major disaster that is progressing and it's getting more complicated hour by hour," Kauppaymuthoo told AFP.

The company that runs the vessel, Nagashiki Shipping Co., said in a statement on August 7: "Due to the bad weather and constant pounding over the past few days, the starboard side bunker tank of the vessel has been breached and an amount of fuel oil has escaped into the sea. Oil prevention measures are in place and an oil boom has been deployed around the vessel." 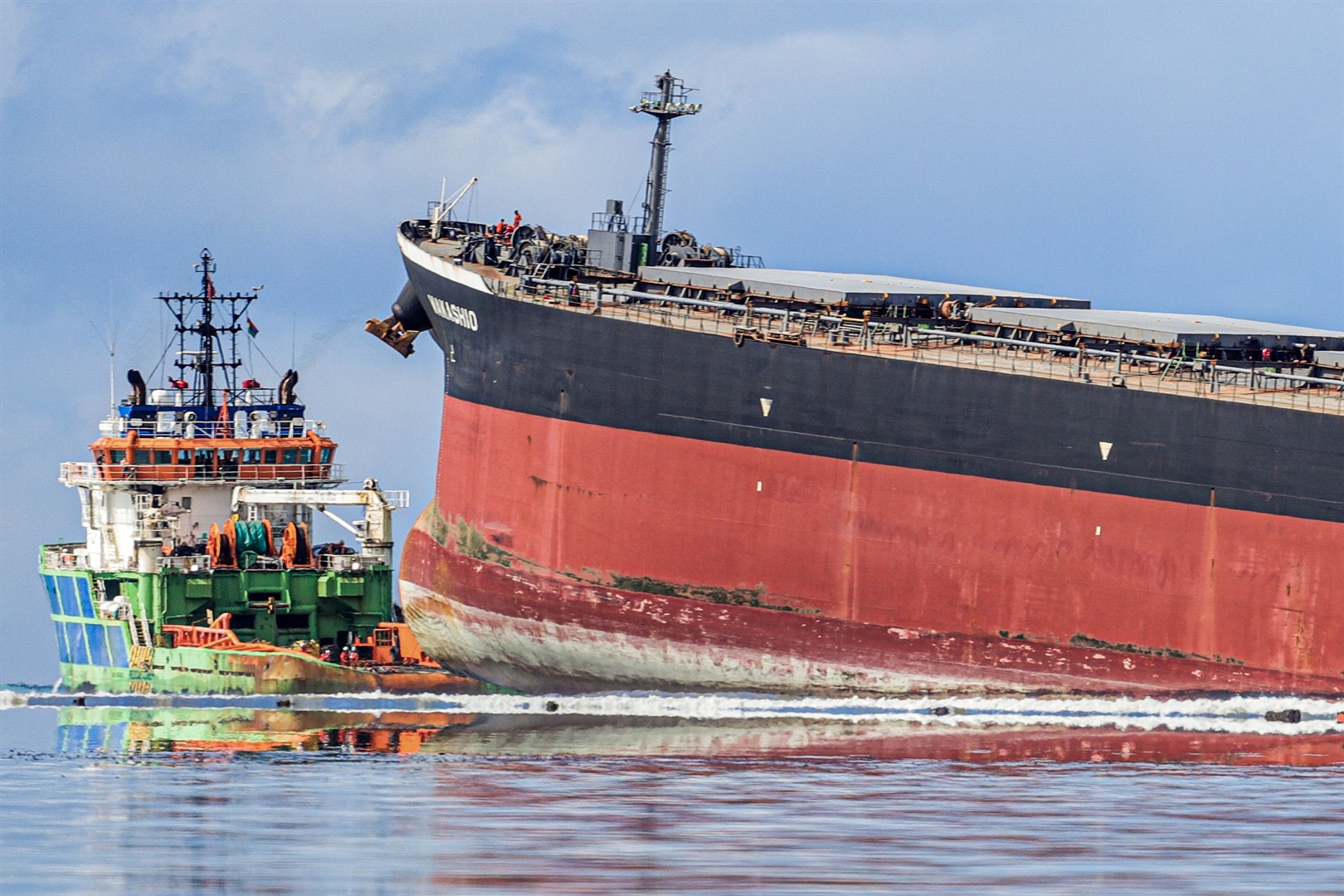 In a rapid effort to contain the oil, volunteers gathered to create boom barriers out of straw, hair, and sugarcane leaves.

Despite local official orders, volunteers drenched in oil "have taken matters into their own hands" to try and contain the leak. Mahebourg environmental activist Ashok Subron told the AFP that thousands of volunteers "are coming together" and are "not listening to the government anymore." 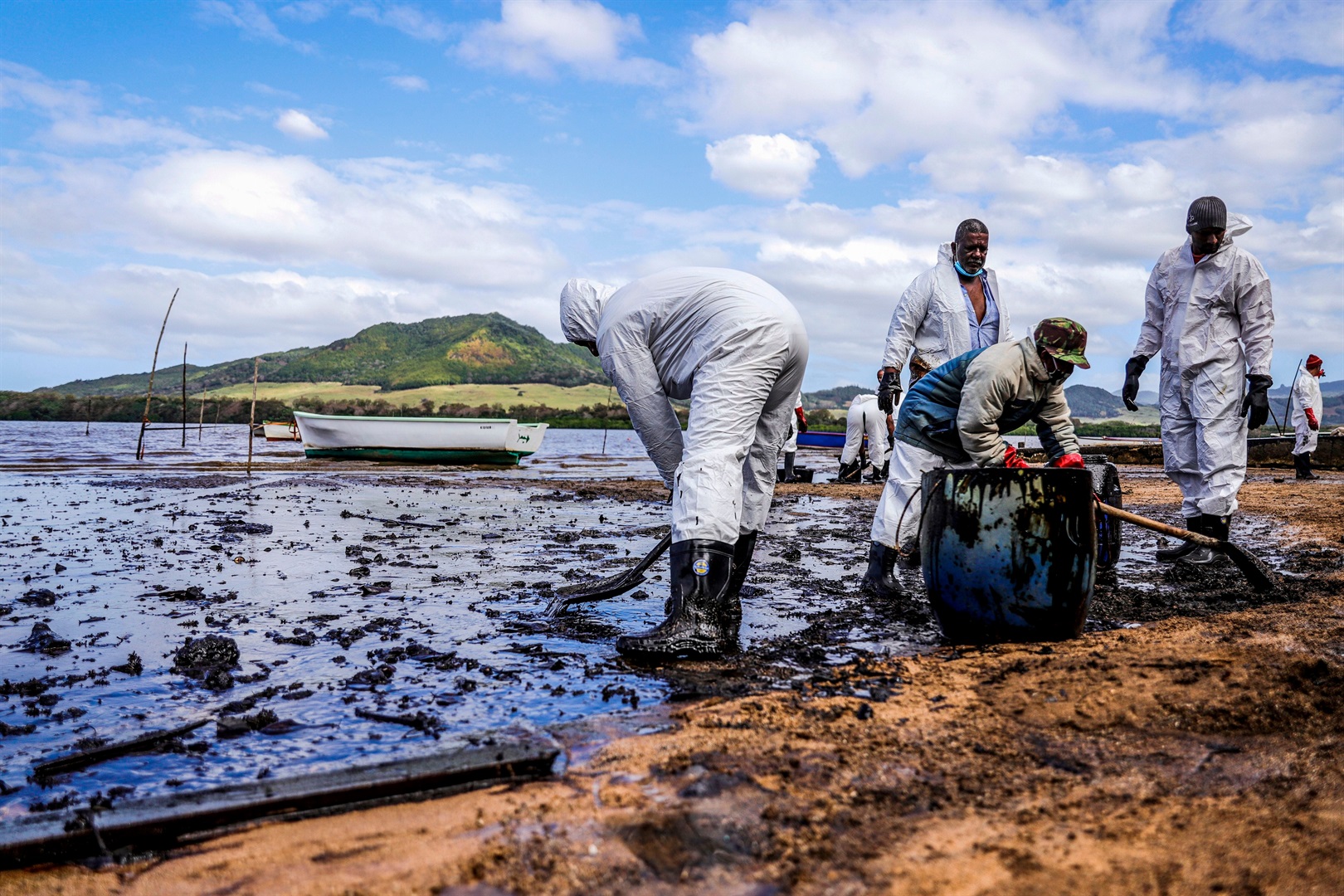 On Monday, Prime Minister Pravind Jugnauth said more than 550 tons of oil had been pumped out the water.

Local police reportedly obtained a search warrant and are conducting an investigation with the help of the ship's captain.