There are a few ways to rumble the red planet.
Samantha Lee/Business Insider

NASA is about to launch InSight: a new R10 billion ($850-million) Mars lander that will probe the red planet's secrets like never before.

InSight is slated to lift off on Saturday, which is one day after International Space Day, on May 4. But it's just one of dozens of robotic and satellite missions that humanity has rocketed to Mars over the decades.

These spacecraft have beamed back dazzling photos, inspired sci-fi movies like "The Martian", and even helped give Elon Musk, the founder of SpaceX, the idea to colonize the red planet with the Big Falcon Rocket.

While scientists readily admit they have much to learn about Mars, including the planet's internal structure (a mystery InSight will try to solve), what we have found out so far is incredible.

Here are 13 fascinating facts about Mars and our robotic exploration of the red planet. The red planet doesn't have plate tectonics, which is what causes most quakes on Earth. But rising plumes of magma could trigger Mars quakes, as could meteorite impacts and the contraction of the world due to cooling. InSight will listen for them with its seismometer.

On average, Mars is a frigid planet because it has almost no atmosphere.
Samantha Lee/Business Insider

Mars has almost as much surface as Earth has land — but that doesn’t account for the 71% of Earth that’s covered in water. 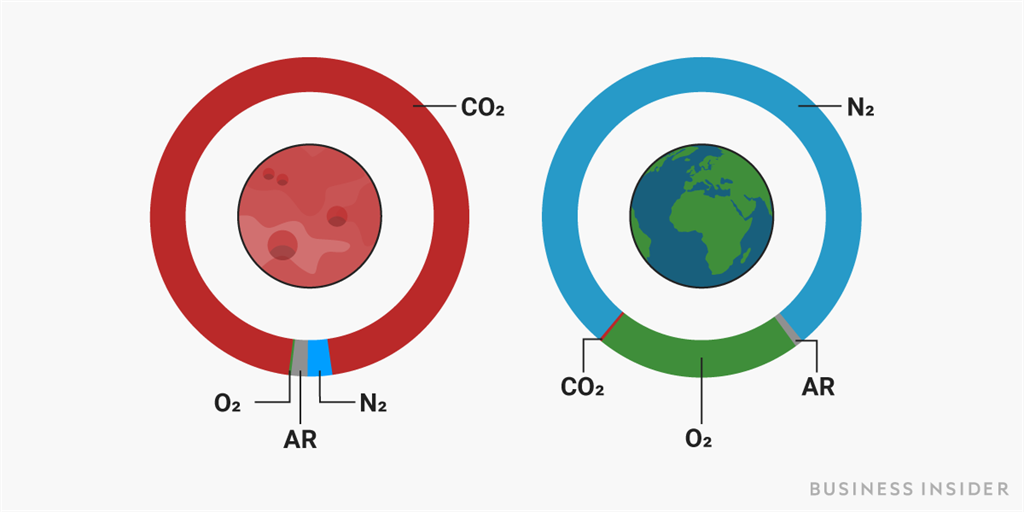 The Grand Canyon has nothing on Valles Marineris.
Samantha Lee/Business Insider

The Martian atmosphere is 61 times thinner than Earth’s, and it consists almost entirely of carbon dioxide, which makes up just 0.04% of Earth’s atmosphere. 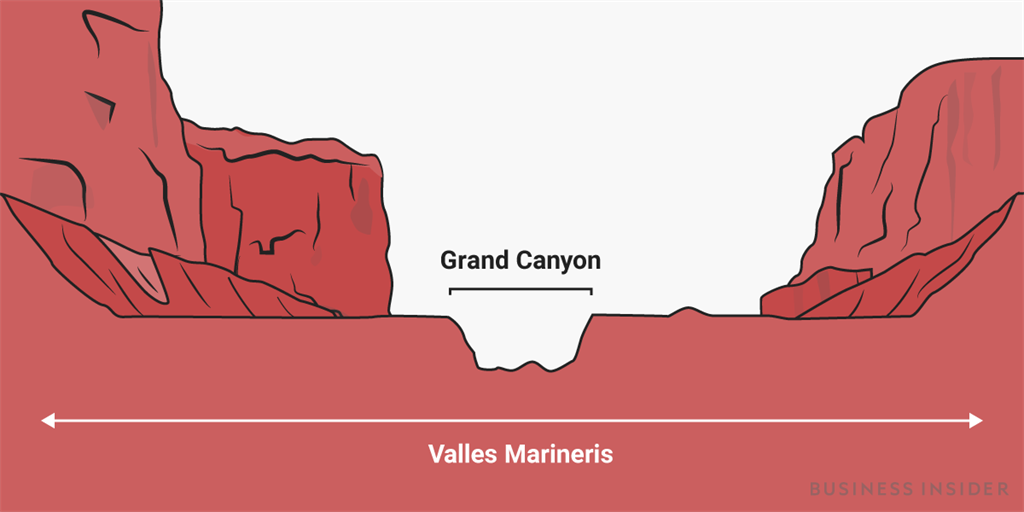 Mars didn't have a lot of water.
Samantha Lee/Business Insider Pools of water could be where life on Mars got its start.
Samantha Lee/Business Insider

Mars once had oceans, but adding them up would give you just 1.5% of all water on Earth. 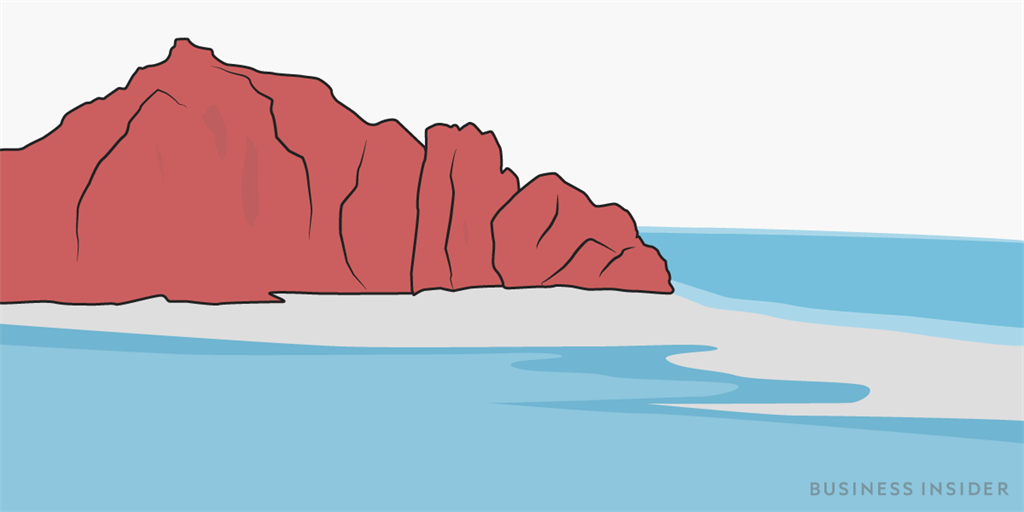 You wouldn't want to get hit with an ancient Martian tsunami.
Samantha Lee/Business Insider

If aliens existed on Mars, they might have lived in oasis-like pools. These pools would have been habitable for life, just as they are on Earth. Martian oceans also had tsunamis like those on Earth. The tallest may have reached as high as 400 feet, just slightly shorter than the London Eye. Volcanoes on Mars dwarf those on Earth.
Samantha Lee/Business Insider

Like Earth, Mars has ice caps at its poles. The northern cap is up to 2 miles deep, is a mix of water and carbon dioxide, and covers an area half the size of South Africa. 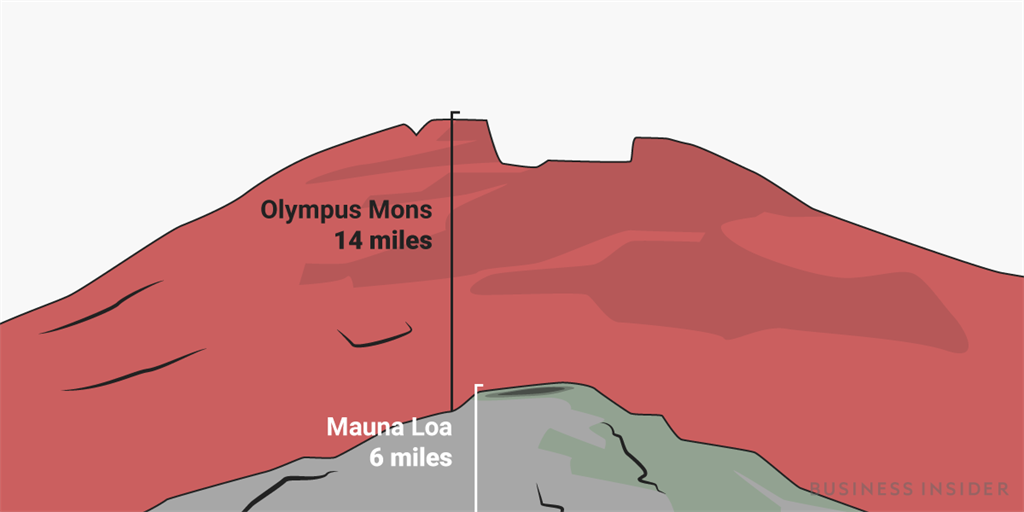 Missions to Mars have waxed and waned over the decades.
Samantha Lee/Business Insider

Olympus Mons is more than twice as high as Hawaii's Mauna Loa. 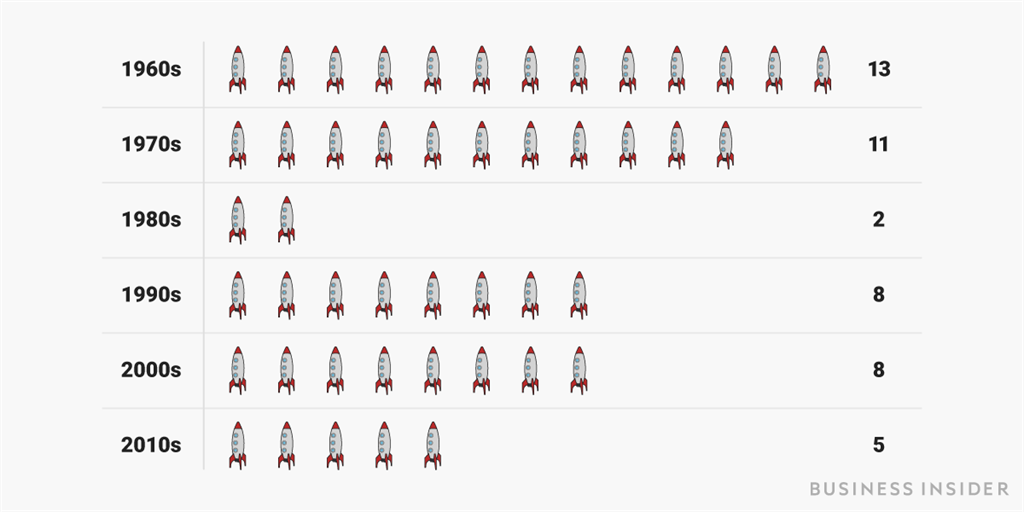 Getting to Mars is hard: About a third of the missions launched have failed. Mars is one of the most-visited yet mysterious planets in the solar system.
Samantha Lee/Business Insider

On Earth, sunsets are a brilliant mix of reds, pinks, oranges, yellows, and other colors. But on Mars they're blue. The reason: Air is about 1/100th as dense on the surface of Mars than it is on our planet. This refracts white sunlight less, leading to fewer colors (primarily blues).