From wearing a tie every day to killing his own meat, Facebook CEO Mark Zuckerberg has used New Year's resolutions to improve himself each year over the last decade. Here's everything he set out to do since 2009. Every year since 2009, Facebook CEO Mark Zuckerberg has challenged himself to broaden his perspective "and learn something about the world beyond my work at Facebook," he once explained.

His tool of choice? A New Year's resolution.

His 2019 resolution was to hold public debates on the effects of technology on society, although in all there were only six, and just one was truly public.

His resolution the previous year was focused on his job. He wanted to fix Facebook's hardest problem at the time: ending the abuse of the platform, whether through election-interference efforts, fake news, or other nefarious practices.

His first resolution, in 2009, was also focused on his job: wear a tie every day.

"That first year the economy was in a deep recession and Facebook was not yet profitable," Zuckerberg wrote in a Facebook post on Thursday. "We needed to get serious about making sure Facebook had a sustainable business model. It was a serious year, and I wore a tie every day as a reminder."

But many of his resolutions have focused more on personal growth - the kind that any of us might make.

Here's the full list, in case you need inspiration to take on a New Year's resolution of your own:

Zuckerberg might be most recognisable in a t-shirt and hoodie, but he decided to wear a tie every day in 2009 to keep up appearances in the face of the recession. "My tie was the symbol of how serious and important a year this was" he posted on his Facebook profile.

Two years later, Zuckerberg showed off his language skills to a Chinese audience, where he explained that he had learned Mandarin to better communicate with his then girlfriend's (now wife's) family, and to tell her grandmother that they were getting married in Mandarin. He also said, "Chinese is hard and I like a challenge!"

By 2016, Zuckerberg was advanced enough to wish viewers "health and prosperity" for the Lunar New Year with his wife, Priscilla Chan, and their daughter Max.

2011: Be a vegetarian, or eat meat only if he killed the animal himself

Zuckerberg enlisted his neighbour, who is also a chef, for help with his 2011 resolution. His plan was to kill animals himself, then take them to a Santa Cruz butcher.

"I think many people forget that a living being has to die for you to eat meat, so my goal revolves around not letting myself forget that and being thankful for what I have" Zuckerberg explained at the time. "So far, this has been a good experience. I'm eating a lot healthier foods and I've learned a lot about sustainable farming and raising of animals."

By Facebook's second birthday in 2006, Mark Zuckerberg had already given up coding to focus on managing and growing the social network. He said he missed the "elegance to writing code," so this resolution was no surprise.

2013: Meet a non-Facebook person every day After a resolution that put him back to work coding, Zuckerberg sought to expand his social life outside of Facebook. He told Fortune "It's going well - I've done a bunch of things in the community and just tried to get broader exposure." Zuckerberg kept up the goals about connecting with people in 2014. "I always kind of see how I want things to be better, and I'm generally not happy with how things are, or the level of service that we're providing for people, or the quality of the teams that we built," he told Bloomberg. "But if you look at this objectively, we're doing so well on so many of these things. I think it's important to have gratitude for that." That year, Zuckerberg asked for ideas on his Facebook page. Like Bill Gates before him, Mark Zuckerberg decided to start a reading challenge for himself, and recommend books he thought everyone should read. With a goal of reading 25 books during the year, he made a Facebook page dedicated to discussing his picks with other readers.

Check out some of his recommendations here. 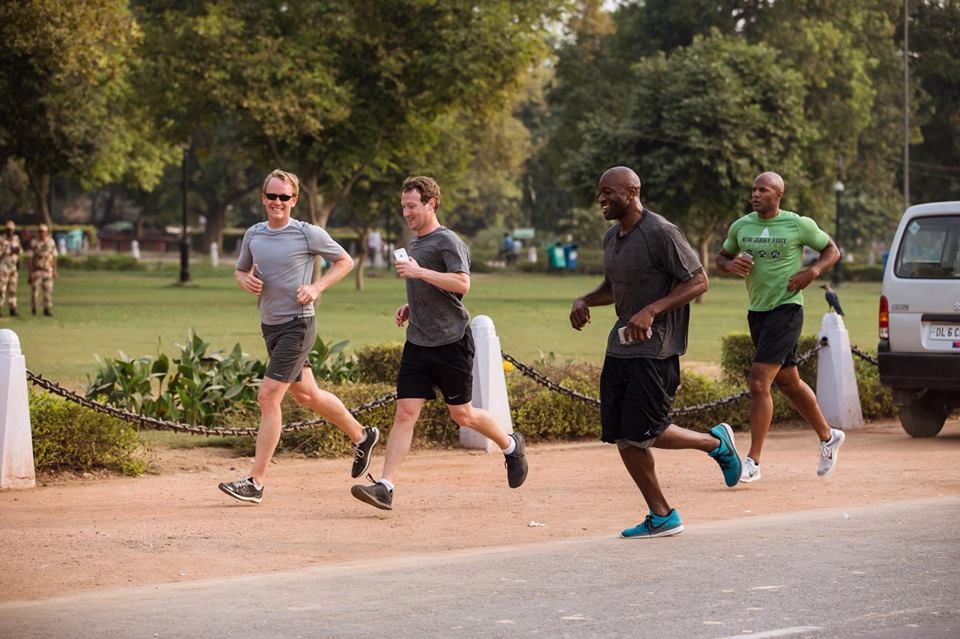 In 2016, Zuckerberg gave himself another coding challenge. He wanted to build an AI to help with his home and work. He wanted to be able to use his voice to control music, temperature, lights, and more, and he wrote, "You can think of it kind of like Jarvis in Iron Man," which would be a "fun, intellectual challenge" for him.

He finished his other goal of running 365 miles (587km) in July of that year.

2017: Meet someone from every US state After Facebook's PR nightmare after the 2016 election, Zuckerberg planned to personally visit and meet people in every US state. He and his wife, Priscilla Chan, took road trips around the 30 states Zuckerberg had not yet visited.

"After a tumultuous last year, my hope for this challenge is to get out and talk to more people about how they're living, working and thinking about the future," he said. "My work is about connecting the world and giving everyone a voice. I want to personally hear more of those voices this year."

In 2018, Zuckerberg took on the huge goals of addressing hacking and abuse on Facebook. "We currently make too many errors enforcing our policies and preventing misuse of our tools," he wrote.

"This may not seem like a personal challenge on its face, but I think I'll learn more by focusing intensely on these issues than I would by doing something completely separate," he said. "These issues touch on questions of history, civics, political philosophy, media, government, and of course technology. I'm looking forward to bringing groups of experts together to discuss and help work through these topics."

2019: Host public debates about the effects of tech on society After yet another development in the Cambridge Analytica scandal in 2018, Zuckerberg tried to position himself and Facebook as part of a solution by holding debates about the challenges and promises of technology.

"There are so many big questions about the world we want to live in and technology's place in it. Do we want technology to keep giving more people a voice, or will traditional gatekeepers control what ideas can be expressed?" he wrote. "Every few weeks I'll talk with leaders, experts, and people in our community from different fields and I'll try different formats to keep it interesting."

In the end, he held only six discussion, only one of them truly public, and they were received with criticism. For 2020, Zuckerberg wrote 1500 words reflecting on the past decade's resolutions. He said he was glad he did them, but "it's time to do something different."

For the '20s, Zuckerberg wrote that he would no longer issue annual goals, and instead planned to focus on the whole decade. He wrote out a few predictions for what the world would look like by 2030, like the expectation that more institutions would be run by millenials, and that augmented reality glasses would finally have a breakthrough.