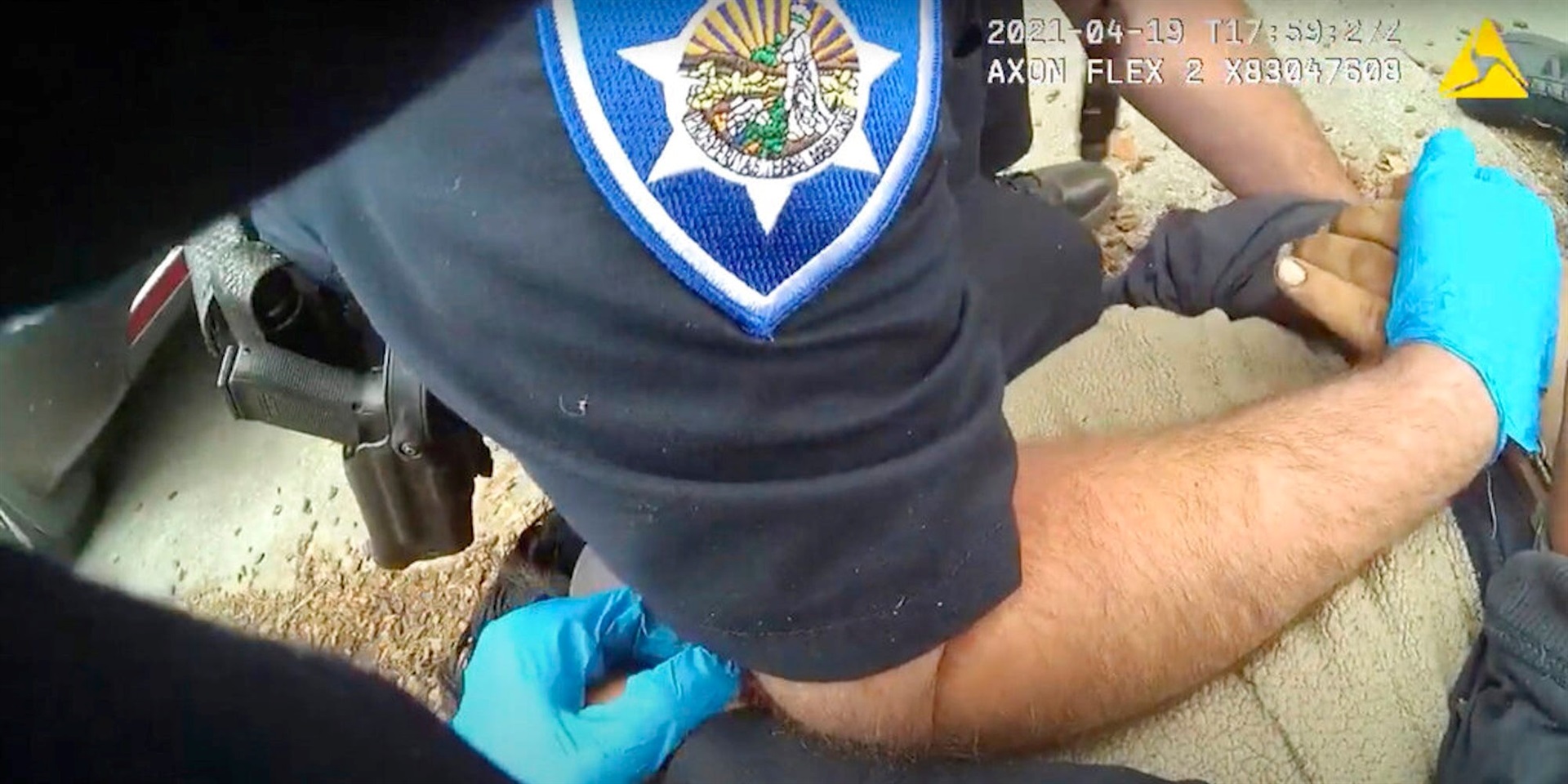 Police bodycam footage released on Tuesday shows an officer in Alameda County, California, pinning a man to the ground for five minutes before he stopped breathing and died later in hospital.

The April 19 footage, which was released on Tuesday, shows officers confronting Mario Gonzalez, 26, in the northern California city of Alameda.

In an initial report on Gonzalez's death, the police said that the officers were responding to reports of a man who "appeared to be under the influence and a suspect in a possible theft."

The hourlong footage shows officers initially talking to Gonzalez, and instructing him to put his hands behind his back. Gonzalez is heard talking incoherently and does not comply with the order.

A scuffle ensues and Gonzalez is pinned to the ground by officers applying pressure to his back, the footage shows.

One officer can be seen placing his knee on Gonzalez's back for four minutes, and Gonzalez is seen protesting and struggling, and appears increasingly to be in distress.

"Think we can roll him on his side?" one officer is heard asking.

The officer who is restraining him is heard saying in response: "I don't want to lose what I got, man."

At this point, Gonzalez can be seen losing consciousness. The footage shows officers then attempting to resuscitate Gonzalez before emergency workers arrive.

In total, Gonzalez was restrained face down for around five minutes.

Gonzalez later died in the hospital. The police have said that the cause of death is still unknown pending an autopsy, NBC Bay Area reported.

Brother of #MarioGonzalez: â€œthe police killed my brother in the same way they killed #GeorgeFloyd.â€
Gonzalez family has seen Alameda PD body cam video & they say police had their weight on Marioâ€™s neck & his back.
â€œEverything we saw in this video was unnecessary...â€ @nbcbayarea pic.twitter.com/Tv3SZ3T5eD

"The police killed my brother in the same manner they killed George Floyd," Gerardo Gonzalez told a Tuesday press conference.

Gonzalez's family said he had a four-year-old son and was also the main carer for his 22-year-old brother, who has autism.

Authorities in Alameda said that an investigation into Gonzalez's death had been launched, and the officers involved in the incident were put on paid leave while it is being conducted.

Alameda "is committed to full transparency and accountability in the aftermath of Mr. Gonzalez's death," the city said in a statement, according to the Associated Press.

Police forces across the US have come under renewed scrutiny over their use of force in the wake of the death of George Floyd in Minneapolis last year. Derek Chauvin, the officer who knelt on Floyd's neck for several minutes while performing an arrest, was convicted of murder last week.