Mandela’s grandson is auctioning his books as NFTs – starting at under R4,000 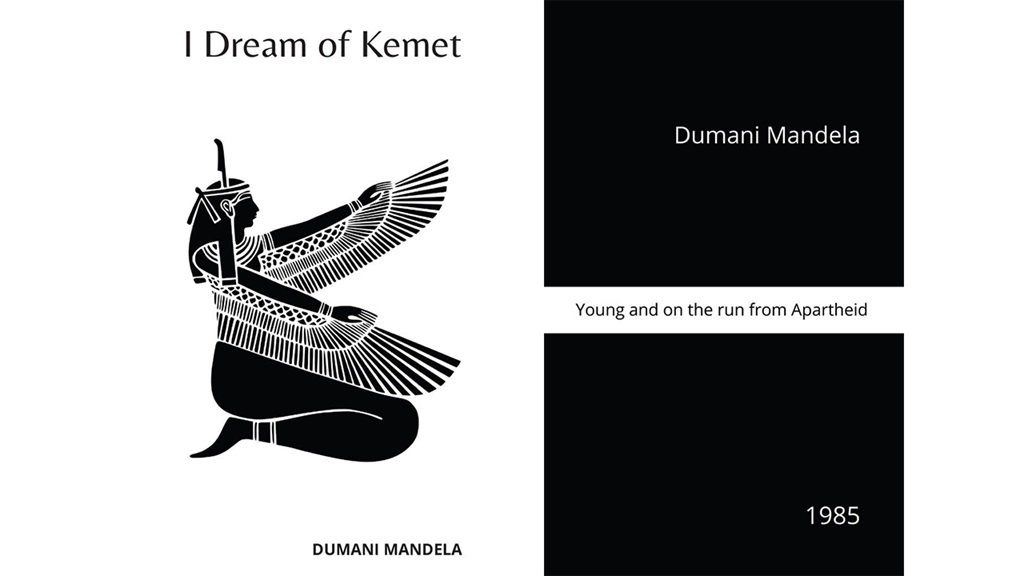 Dumani Mandela's novels: I Dream of Kemet and Young and on the run from Apartheid.

Dumani Mandela, the grandson of South Africa's first democratically elected president Nelson Mandela, is set to auction two of his novels as non-fungible tokens (NFTs), with the proceeds going towards the development of a mental healthcare app.

Dumani, one of Madiba's 17 grandchildren, is in the process of transforming two of his recently published novels – I Dream of Kemet and Young and on the run from Apartheid – into limited edition NFTs which will go on auction in August.

The NFT phenomenon has gained major traction in the global art community over the past year, with digital creations setting new sales records. These one-of-a-kind digital artworks, purchased with cryptocurrency, have a stored digital record on a blockchain which verifies the token's ownership and authenticity.

What is a non-fungible token?
A non-fungible token (NFT) is a secure digital file which validates ownership within a blockchain system which represents an online ledger. Any digital art – including images, video game items and music – can be packaged and sold as NFTs. It's impossible to forge an NFT, and it acts as an artist's signature, confirms the identity, and ownership of the underlying digital object.

South African artists, galleries, and social media marketers have recently jumped on the NFT trend with mixed success. Local artist Norman O'Flynn got 1.491 ETH (R59,000 at the time) for an NFT auctioned in March. An NFT marketplace launched in April with digital art created by former Springbok rugby player Bryan Habana selling for R150,000. A Capetonian even bought rare cannabis seeds as NFT art in June.

As South Africans try and figure out the intricacies of the NFT market, specialised creative agencies are stepping in to bridge the gap between physical artworks and digital tokens. BlockSmart is one such agency based in London and is managing the minting, marketing, and listing of Dumani's NFTs.

"Our aim is to consult and educate creatives about blockchain, the benefits of NFT, their various uses and how they are set to disrupt multiple industries," BlockSmart tells Business Insider South Africa.

I Dream of Kemet, published by Dumani in 2020, is a novel based on African magic realism from an African perspective and follows the protagonist's return from Europe to his home continent. Young and on the run from Apartheid, published earlier this year, is set between 1985 and 2004, following the main character who is forced into exile because of his parents' political activities.

"I think what is special about this NFT is not only the content and context of the books but also the noble project that they represent," Dumani explains to Business Insider SA.

"The books from a context and content side cover a theme that is underrepresented in South Africa that being a combination of modern and traditional approaches to mental health from an African context."

Both books as NFTs are due to go be auctioned by OpenSea – the longest-running marketplace for digital art – in the middle of August. A limited-edition of 100 NFTs will be auctioned and contain a unique 3D cover art piece with digital and physical copies hand-signed and dated with a message from Dumani.

Bidding is expected to start at $250 (R3,600), although BlockSmart says this reserve price will be finalised on 5 August.

"We live in an age of information overload, and this means that sometimes getting information about mental illness from available resources can be time-consuming and also confusing," says Dumani in explaining that funds raised from the NFT auction will be used to develop and market his mental healthcare platform.

"Myminimalist.co.za is a simple chat and video platform for people suffering from depression and associated mental illnesses in the African context. Users can pose chat questions and video call a practitioner of their choice. The intention is to bring together both modern and traditional practitioners in one space to provide a holistic approach to mental illness and depression in the African context."

Dumani, who also authored Rain on a Sunny Day: Living and Thriving with Bipolar as a personal look at mental health struggles within the African context, says Myminimalist intends "to act as both an advisory and also referral platform to mental health care practitioners on the continent."

"Our ambition is to provide a subsidised service for users where 80% of people on the continent who suffer from mental illness remain undiagnosed, while providing a platform where practitioners can reach out to a wider audience for their practices."