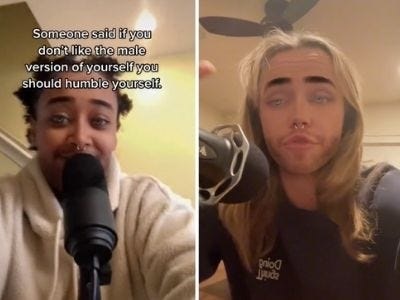 Lakew's original video has been stitched by hundreds of women making their own version. TikTok: Elsa Lakew, Hayley Hirsch

When 27-year-old Elsa Lakew tried out a TikTok filter that gave her thicker eyebrows, a septum piercing, and a beard, she was reminded of a very specific type of person on the internet.

"I was like, oh, I look like a podcaster. I had my mic right next to me and I was like, why not just do this," she told Insider.

"This" refers to her comment in the video, where she pokes fun at the ubiquity of men in podcasting, saying, "If I looked like this I would start a podcast. You know what women don't be doing…?"

The 16-second clip was posted on January 20, and became an instant sensation. Within 30 minutes it had over 10,000 views, and by that evening it had already reached a million, Lakew told Insider. It's now been viewed over 15 million times, and has spawned its own trend, with hundreds of women using TikTok's "stitch" feature, which allows them to add their own content to the end of Lakew's original clip, often impersonating a stereotypical sexist male podcaster.

Some of the most popular responses have millions of views, like Hayley Hirsch's post mimicking a "science guy" who explains "there's an evolutionary reason why women aren't funny."

@sadimmigrantkid God knew what he was doing #fyp#podcast#CloseYourRings#westelmcaleb? If I looked like this I would start a podcast - Elsa.

It's one of a number of TikTok trends where women comment on sexist tropes, like the hashtag "writtenbymen" which mocks the way men create female characters. To many, these are amusing comedy skits, but Lakew argues these videos also offer important social commentary.

Lakew was inspired to make the video after seeing multiple viral TikToks of men "doling off really misogynistic, fatphobic takes on women," she told Insider.

She said she had seen other creators reacting to them with witty comebacks. "As much as I appreciated those sophisticated takes, you can't really beat logic with logic. So I decided to just mirror the 'douchebaggery,' and that was my way of resisting," she said.

Mostly, the reactions to Lakew's video and the overall trend have been positive. Women are flocking to the comments section to add their own takes and additions. The most popular comment, by a user called @whitetrashing, has over 100,000 likes, and reads, "that man would leave you with 3 kids and then tell his new gf that you never let him see his kids."

The trend also has a serious message

Though many of the responses to the video are filled with cry-laughing emojis, Lakew posted a follow-up with a more serious message.

Explaining that this is "not a humor video," Lakew draws links between how white people responded to the development of Black civil rights and how men are currently reacting to women's increasing social and economic power.

"We are seeing this shift in terms of our social and economic standing, and men are trying to use all of this very bravado-esque, alpha-male podcasting as a way to instill fear in women and try to keep them at the same status that they've always been."

Najma Sharif, an editor and writer, agreed there is more to the message than just a viral trend. In a tweet that received over 2,000 likes, she wrote, "There is no better critique of patriarchy [right now] than the girls mocking men on podcasts. This movement has transcended race, ethnicity, religion, and class. It's phenomenal to witness."

Lakew deeply appreciates all those who have participated in the trend. She told Insider, "I feel like most of the credit really does go to the other girls who have duetted this and really made this what it is. My TikTok was funny, but theirs are just absolute gold."