Electric aircraft are getting larger and larger, a positive sign for an industry historically reliant upon petroleum-based fuels. On Thursday, a Cessna Grand Caravan powered solely by electricity departed from Washington in the US, and successfully cruised around in the skies without using jet fuel before landing safely.

It was the latest milestone for MagniX, a company determined to reshape aviation by powering aircraft electrically rather than with fuel. And while the Grand Caravan is the largest electric aircraft MagniX has ever flown successfully, it wasn't the first as MagniX debuted a smaller electric plane in 2019 borrowed from Canada's Harbour Air.

The electric seaplane is working towards certification to soon ferry passengers around British Columbia and the Pacific Northwest, making it one of the few passenger planes not dependent on aviation fuel for power.

The engine powering both the seaplane and Grand Caravan, however, is the same, with the Magni500 offering the propeller aircraft 750 horsepower. It's one of two engines being produced by MagniX, and the more powerful one compared to the Magni250 offering 375 horsepower.

While modifying existing aircraft to electrically-powered machines rather than gas guzzlers, MagniX is also working with new manufacturers to develop the planes of the future powered by its engines.

Take a closer look at the world's largest electric plane and the company behind it.

History was made on Thursday, according to MagniX CEO Roei Ganzarski. The 30-minute first flight of MagniX's Cessna Grand Caravan on in May proved that large, turboprop aircraft could be powered and flown electrically. 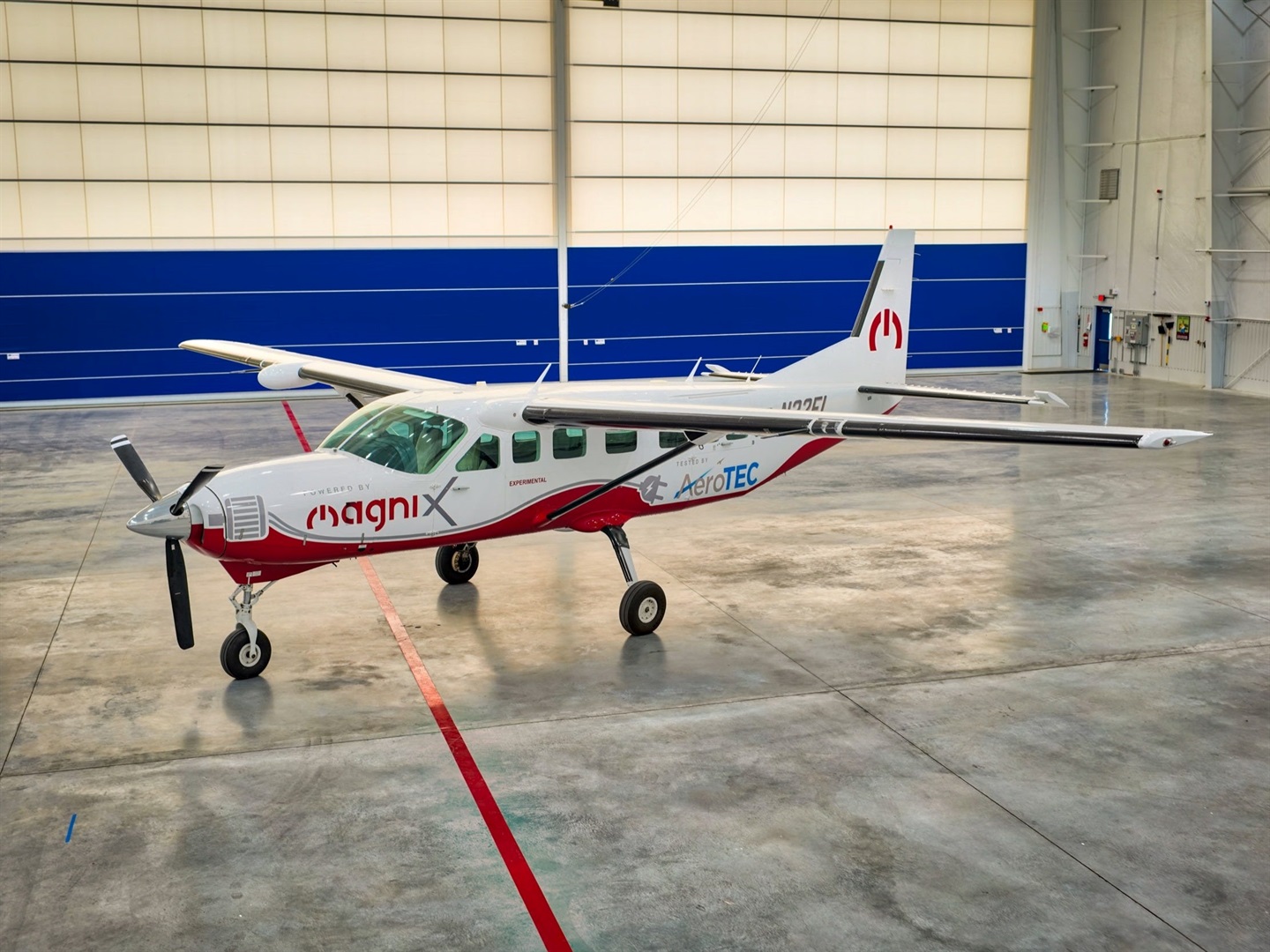 Replacing the normally expensive and cost-volatile fuel were lithium-ion batteries loaded into the aircraft's cabin. While fuel prices have been low in recent months, high oil prices have seen the demise of some airlines unable to afford it. The total set up powering the Magni500 engine that weighs around two tons and takes up the entirety of the cabin, leaving no room for passengers, at least on this prototype. The set-up for the first flight was purely for proof of concept, with Ganzarski telling the Seattle Times that no effort was made to accommodate passengers. The design and battery placement were purely to get the plane in the air to show large planes such as the Grand Caravan can fly on battery power. The aircraft itself looks no different than its fuel-powered siblings, the only difference being the large three-blade propeller is powered by a battery. Now that the concept has been proven, MagniX can focus on certification and better incorporating the batteries powering its engines into the aircraft so that passengers can actually fly on electric aircraft. The Redmond, Washington-based manufacturer is highlighting its accomplishments in the field as indicative of the beginning of a new era. Here's the Grand Caravan posing in front of a Boeing 747, a four-engine symbol of aviation's dependence on traditional fuels. MagniX estimates that the plane will only be able to fly around 100 miles using battery power, a far cry from the normal ranges a fuel-powered Grand Caravan boasts. But the operating cost would be lower, by around 40-70% per hour. Like most electric vehicles, the challenge becomes finding places to recharge, which may prove to be difficult in the remote environments that the Grand Caravan often finds itself in. The electric-powered six-passenger seaplane took to the skies for the first time in 2019, as part of a partnership between Canadian regional airline Harbour Air and MagniX. Once the electric aircraft is certified, Harbour Air has said it will retrofit its entire fleet to battery-powered, reducing emissions and costs. Both the electric Beaver and Grand Caravan could be certified for commercial use by 2022, as using existing airframes makes certification easier. The hurdle will be clearing aviation regulators in the US and Canada as Harbour Air is based in Vancouver while MagniX is based in Redmond, Washington. MagniX is also working with Eviation, a company similarly focused on sustainable aviation, to power its Alice aircraft. First debuted at the Paris Air Show in 2019, the electric plane can seat nine and fly over 500 nautical miles. The aircraft aims to be certified by the end of 2022, powered by MagniX engines, with US regional airline Cape Air expected to order it.