I went to a Lucha Libre wrestling match in Mexico City, and it was even better than I imagined A real thing that happened in front of me in real life.
Ben Gilbert/Business Insider

A few weeks ago, as I bought tickets for a Lucha Libre show in Mexico City on Ticketmaster, I didn't know what to expect.

Something regarding masked wrestlers? And there was that Jack Black movie I didn't see? That's about it.

What I experienced was eye-opening: an hours-long comedy show with over a dozen different actors performing marvelous feats of acrobatics. Lucha Libre appeals to all ages, despite offering attendees a waterfall of booze, and all walks of life - ticket costs are low, and don't go very high. Whether you're a wrestling fan or not, it was an experience that I would unequivocally suggest to anyone lucky enough to visit Mexico City.

Here's what it was like attending a CMLL Lucha Libre match in Mexico City on an average Tuesday night.

Lucha matches at Arena México were running several times weekly when I bought tickets. We arrived in Mexico City on a Sunday, and I got tickets for Tuesday night. You can buy tickets ahead of time, on Ticketmaster, or you can just walk up to the ticket booth on the night of the show. If you don't speak any Spanish, and/or you want to guarantee a seat for a particular night, your best option for getting Lucha Libre tickets is Ticketmaster. I easily bought tickets with my credit card and picked them up at the box office on the night of the show.

Notably, there isn't just one Lucha Libre league (or "promotion," in the parlance of wrestling).

The one I went to see - CMLL, or Consejo Mundial de Lucha Libre (World Wrestling Council) - is the most popular. I asked friends who are into wrestling, and they all suggested seeing CMLL. So I did!

Before and after the event, street vendors sell all types of snacks. Lucha masks are also for sale, which you can wear during the show. After a short trip through security, we were inside — greeted by a massive mural of luchadors, a gift shop, and a Michelada stand. Here's a closer look at that mural: A plaque commemorates the founder of the CMLL, Don Salvador Lutteroth Gonzalez, and the 80-plus-year legacy of Mexican wrestling he left behind. The wrestling promotion, originally known as Empresa Mexicana de Lucha Libre (Mexican Wrestling Enterprise), was started in 1933. The name was changed in the early '90s for a variety of reasons, but the company has remained dedicated to the sophisticated absurdity that is Lucha Libre.

The show kicked off with a dance troop at 7:30 p.m. sharp — the Lucha Libre equivalent of cheerleaders. The dancers set a foundation for the night's theme: "What is this?" After a few moments of dancing, the troop faded into the presentation of over a dozen different luchadors.

After a brief introduction, the first luchadors entered the ring. But even their entrances were no casual affair. 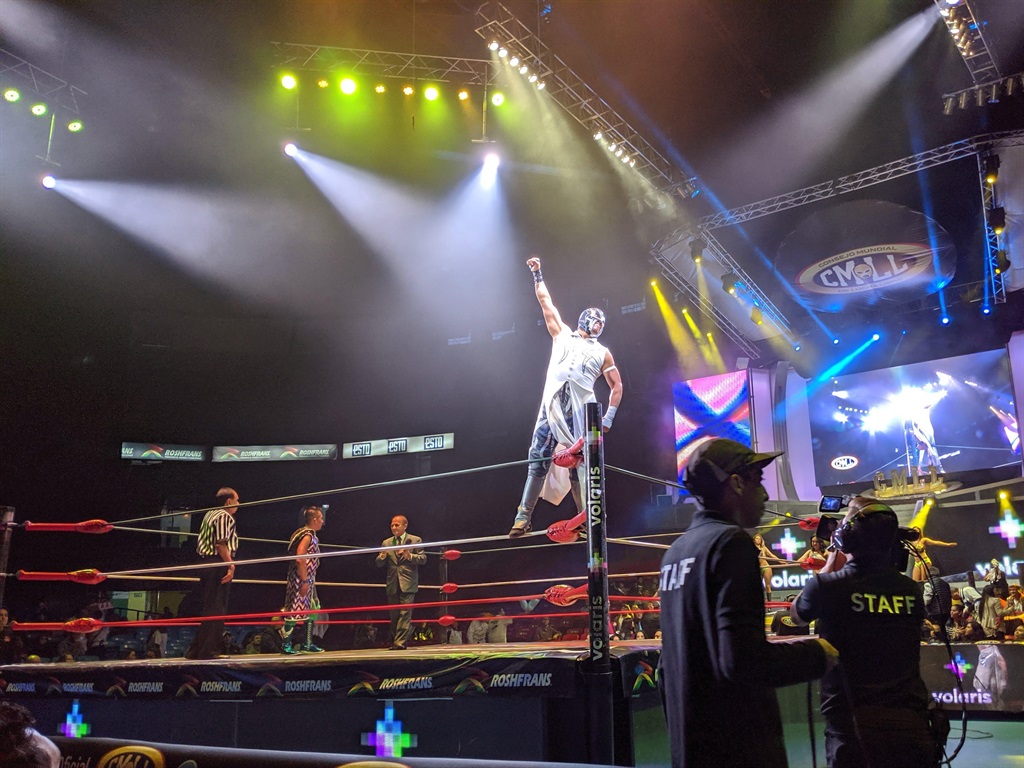 The immediate takeaway from Lucha Libre was the ridiculous acrobatics used for ring entrances. Several fighters ran through the dancers, leapt over the side of the ring head first, and rolled on the ground into a standing position. Tag team partners assisted each other in dramatic entrances. Trios entered together, each affecting their own ridiculous stance mid-air.

And every fighter, without fail, presented themselves to the crowd for cheers - or boos, in the case of the "heels" (bad guys).

After a few more fighters entered the ring, the "fights" began. Wrestling is, of course, not much of a "fight." There are good guys and bad guys, and dramatic character arcs along the way, but the "fight" part of the match isn't much of a fight. It's a kind of physical play with overwrought characters and a sports-like structure.

It's something we all know, but TV has a magical way of masking a lot of the fake hits and carefully-landed acrobatics made to look painful. It's less like a play and, through the magic of television, slightly more believable.

Seeing it up close, in person, makes it much more like a theater production. All those intentionally missed punches look much less real in person. But none of that matters: The audience and the actors are all in on the ruse together, and everyone involved has to buy in for it to work.

It's this aspect of Lucha Libre I found particularly endearing: The audience was there to have a good time, and the fighters were focused on delivering. There is no ego whatsoever, and if one is present it's being used as a joke. The event and its attendees have a shared sense of humor that's irresistibly charming. You can't help but join in - I certainly couldn't.

The booze certainly didn't hurt: During the match, concessions vendors offer beer, soda, and snacks delivered right to your seat. It is extremely easy to enjoy yourself at the Lucha Libre match. You sit back, and vendors offering any number of different things - from beer to spice-covered peanuts to ceviche - stop by, ready to take your order.

If you'd like, you can venture out to the concessions stands, but there's no reason to bother.

Want a torta (sandwich)? They're available, and perhaps you'd like some chips with that? Or fresh palomitas (popcorn)? No problem. How about a fully loaded Michelada, which includes two full beers poured into a massive cup, plus various spices, lime juice, and a tamarind-encrusted straw to drink it through? And would you like chamoy on that? (Yes, you would.)

After my first Michelada "con todo" (with everything), I settled on a giant beer instead.

There's a clown-like silliness to the characters that matches so well with the action, which is all paired with incredibly impressive acrobatics and slapstick physical comedy. Whether luchadors are literally slapping each other on the chest, or poking each other in the eyes, or acting cartoonishly shell-shocked from a hit, there's a level of silly slapstick to the event that reassures everyone of its unseriousness.

This was one of many different instances where one man used another man's neck as a pivot for being thrown. 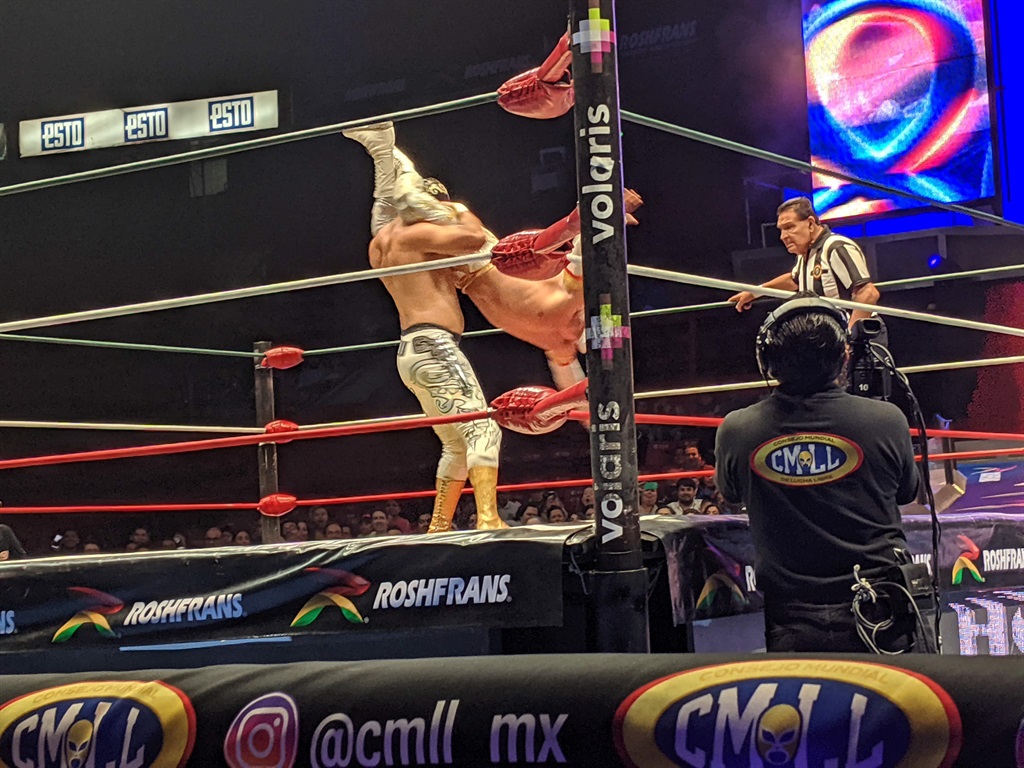 To call wrestling "fake" is to dramatically undersell what's actually being performed.

That the wrestlers aren't actually beating each other up has nothing to do with the fact that they're impressively throwing each other around without killing someone.

With all the dangerous leaps and swings and falls, all while essentially performing physical comedy, it must be tremendously insulting to hear what you're doing is "fake." I was blown away by their physical ability alone, and my sides hurt from laughing so much at the ridiculous antics happening in the ring.

A variety of tag teams opened the show, but the main event of the night featured a one-on-one match between Caristico and Forastero. It was a battle filled with dramatic moments, and one of the fighters even had his mask partially ripped off - the ultimate offense. As you can see above, the fight ended up with both fighters outside of the ring entirely.

Things weren't looking so good for the hero. As is so often the case in theater, the dramatic arc of the final match pitted the good guy (Caristico) against the bad guy / "heel" (Forastero) - and the bad guy spent most of the match winning.

Whether he was literally leaping headfirst out of the ring at his opponent, or ripping his mask off, Forastero was the clear favorite to win for much of the round. What would happen?!

Wouldn't you know it, out of nowhere, Caristico pulled himself together and took out the bad guy. He kept his mask mostly intact, and lived to fight another day. Lucha Libre is some of the most professional silliness I've ever seen, and that's directly up my alley. It knows how ridiculous it is, embraces that, and goes all in. It flatters its audience by giving it enough credit to know the fight isn't "real" - and that's not the point.

Lucha Libre is far from Broadway theater, nor does it aim to be that. It is, however, far more gripping and enjoyable than most theater productions I've seen.

The sense of a shared irreverence among the audience and the production is charming in a way that's impossible to convey - you must go and feel it for yourself.

Get a closer look at what I'm talking about by watching some of the very match I attended right here: