Astronomers have observed the longest supernova ever seen. The mysterious explosion might have annihilated its star, leaving nothing behind. An artist's concept of the SN2016iet supernova.
Gemini Observatory/NSF/AURA/ illustration by Joy Pollard
A billion light-years from Earth, in a previously undiscovered galaxy, the most massive star ever known to be destroyed by a supernova explosion met its dramatic demise.

The supernova - the final explosion of a dying star - was unlike the thousands of similar explosions that scientists have seen before. It lasted longer, produced more light with more variation over time, and contained different chemicals than a regular supernova.

"Everything about this supernova looks different - its change in brightness with time, its spectrum, the galaxy it is located in, and even where it's located within its galaxy," Edo Berger, the author of a study describing the event, said in a press release. "We sometimes see supernovas that are unusual in one respect, but otherwise are normal; this one is unique in every possible way."

The extreme nature of the supernova, named SN 2016iet, suggests that it could be a rare event that scientists have never seen before, called a pair instability supernova.

In theory, this type of explosion would occur when super-massive stars start producing too many matter-antimatter pairs (electrons and positrons) as they burn through their fuel. That production takes up so much energy that the star can't build up enough internal pressure to prevent it from collapsing under its own gravity. So the star contracts, which makes it more dense and hot, which in turns makes it produce more matter-antimatter pairs.

The cycle continues until the star's outer layers completely collapse, creating a thermonuclear explosion that annihilates the star entirely.

This could be how the universe's most massive stars die.

Still, the characteristics of the recently observed explosion don't quite align with scientists' expectations for this type of supernova, so they're not quite sure what they saw.

"When we first realized how thoroughly unusual SN 2016iet is, my reaction was, 'Whoa - did something go horribly wrong with our data?'" Gomez said. "After a while, we determined that SN 2016iet is an incredible mystery."

The most unusual supernova ever An artist's impression of how the very early universe (less than 1 billion years old) might have looked when it went through a voracious onset of star formation, converting primordial hydrogen into myriad stars at an unprecedented rate.
NASA/Getty Images

A normal supernova happens when massive stars (with at least eight times the mass of our sun) run out of hydrogen fuel. They start fusing heavier elements in their cores and eventually run through the entire periodic table, burning every possible element until they reach iron. Fusing iron takes more energy than it produces.

Once a star loses the outward-pushing pressure in its core, it succumbs to its own gravity. Its outer layers collapse and explode, spewing heavy metals into space. The star's remaining core collapses into a black hole or neutron star.

But this does not seem to be what happened during the SN 2016iet supernova.

The European Space Agency's Gaia telescope first noticed the supernova in November 2016, and astronomers watched it for the next three years using various telescopes, including on Mauna Kea in Hawaii and at the Las Campanas Observatory in Chile. This month, researchers from the Center for Astrophysics at Harvard and Smithsonian published an analysis of those observations.

According to their study, SN 2016iet probably began as a star 200 times the mass of our sun - about as massive as scientists think stars can get. SN2016iet as first observed in September 2014, compared against July 2018 observations that revealed the host star's distance from the host galaxy.
Center for Astrophysics

The star formed about 54,000 light-years from the centre of its galaxy. That's more than twice as far as our solar system is from the Milky Way's centre - and we're in a distant corner of our galaxy. That galactic location is surprising, since big stars normally form in a dense cluster near a galaxy's centre.

"How such a massive star can form in complete isolation is still a mystery," Gomez said. "In our local cosmic neighbourhood, we only know of a few stars that approach the mass of the star that exploded in SN 2016iet, but all of those live in massive clusters with thousands of other stars."

What's more, the star formed in a dwarf galaxy, which only contains hundreds of millions of stars compared to the Milky Way's hundreds of billions. That makes the occurrence of such a huge outlier all the more bizarre. A dwarf galaxy (circled) appears only in ultraviolet light. SN 2016iet's location in a dim dwarf galaxy makes it easier to observe, since its light isn't drowned out by other bright stars.
NASA's Goddard Space Flight Center/ESO/JPL-Caltech/DSS

Over its short life of a few million years, the giant star lost 85% of its mass. When it ran out of fuel to burn, it exploded. But unlike thousands of supernova explosions that scientists have observed, this one completely annihilated the star, leaving nothing behind.

A few other characteristics distinguished this supernova from all others: It lasted longer than 800 days, far surpassing the longest supernova ever observed before - a 600-day event that excited astronomers in 2017.

All these extremes suggest to scientists that they observed a pair instability supernova.

"The idea of pair instability supernovas has been around for decades," Berger said. "But finally having the first observational example that puts a dying star in the right regime of mass, with the right behavior, and in a metal-poor dwarf galaxy is an incredible step forward."

Scientists may have to rethink their models 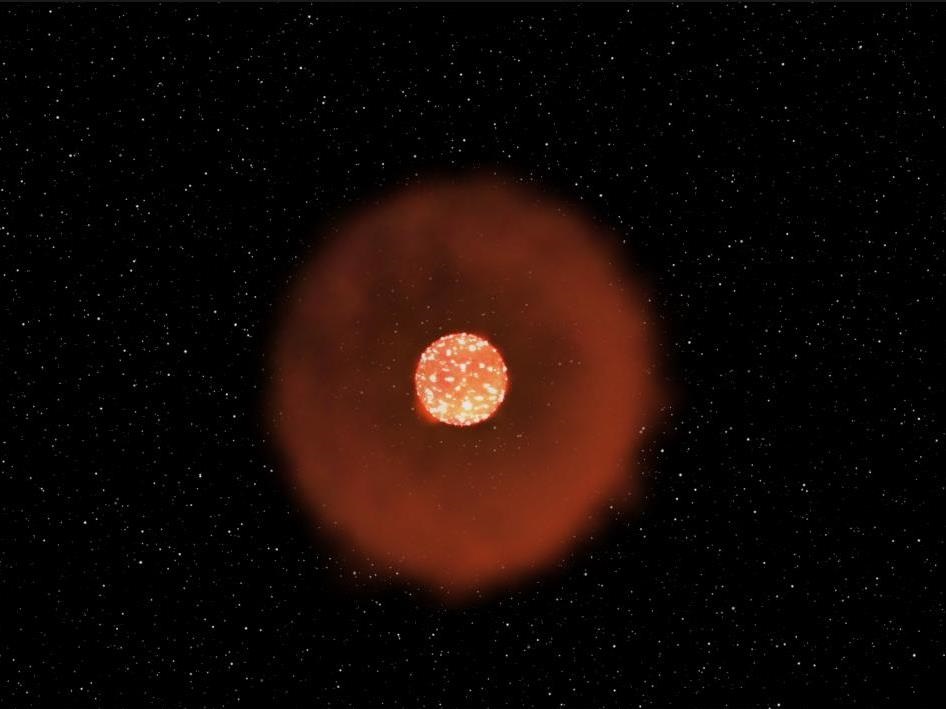 A giant star "burps" out a shell of gas and dust about a year before exploding.
NASA/JPL-Caltech

The researchers think that SN 2016iet could even be what's called a pulsational pair instability supernova (PPISN). That's when the initial explosion doesn't completely annihilate the star, and the remaining unstable material continues to contract and explode repeatedly until the star dies.

Scientists know that these types of supernovae exist, and they have models for what they would look like. They've just never seen one. SN 2016iet exhibits all the right characteristics, but busts the models' parameters.

"All of these things fit and we're excited about it," Stan Woosley, an astrophysicist who has built theoretical models of PPISN and was unaffiliated with the new study, told Business Insider. "But the problem is the details, of course. When you get into it, what they saw was too bright and lasted too long for any of the models that I currently have."

All in all, this explosion seemed to require more mass and energy than the models allow, he said.

In their paper, the research team suggested that the cause of the discrepancy may be that for a decade before its explosion, the star ejected debris into its surroundings (the mass of about three suns each year). So when the dying star finally exploded, it collided with this built-up debris, and those collisions made the explosion longer and brighter. 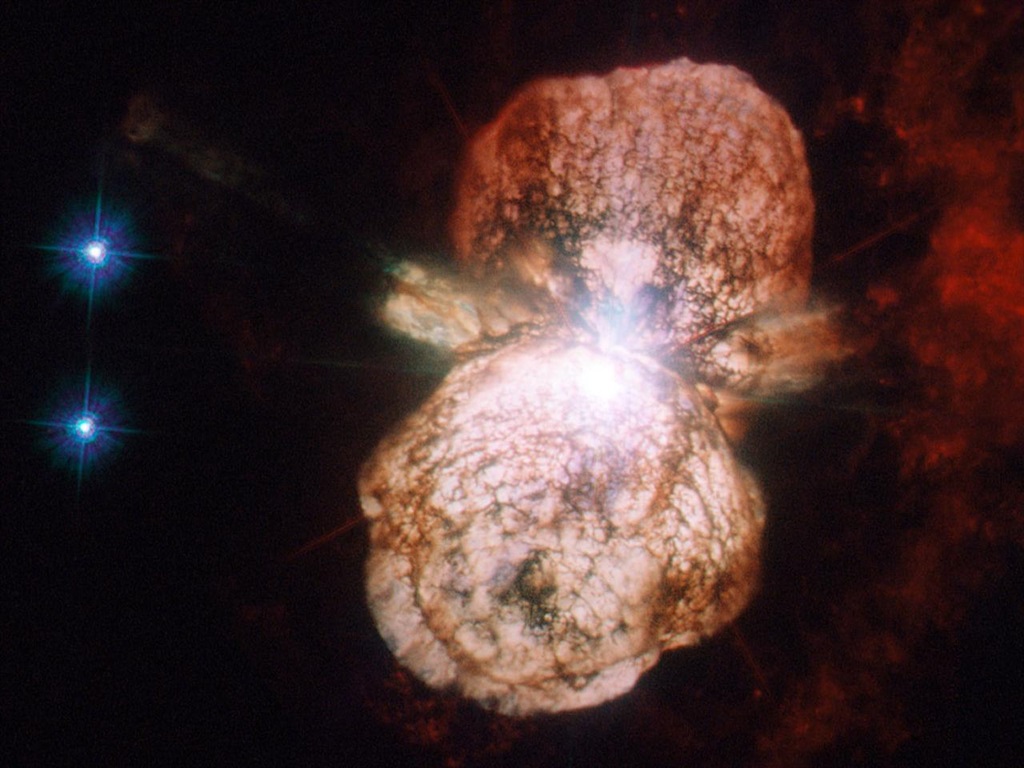 The largest star in the Eta Carinae system, shown in ultraviolet and visible light as it nears the end of its life and a probable supernova explosion.
NASA Goddard

Woosley said the new findings are spurring him to revisit his own models. Astronomers, meanwhile, will continue observing SN 2016iet.

"Most supernovas fade away and become invisible against the glare of their host galaxies within a few months. But because SN 2016iet is so bright and so isolated, we can study its evolution for years to come," Gomez said. "We can't wait to see what other surprises this supernova has in store for us."

Related Links
'No image will surpass this': Hubble telescope astronomers created a stunning picture of the deep...
A South African recorded Saturn 'touching' the moon with his phone, and the stunning pictures are...
The first-ever picture of a black hole is fuzzy. These incredible illustrations help explain what...
Next on Business Insider
Credit card machines for small businesses have never been cheaper – how the options compare