*The article has been updated on 12 March 2020 with information clarifying the fault which caused the trip.

Following a trip at the Koeberg nuclear power station, just outside of Cape Town, South Africa was once again plunged into stage four loadshedding on Tuesday.

Koeberg Unit 1, which generates 930 megawatts (MW) of electricity, had to be disconnected from the grid due to a fault on the turbine section of the nuclear plant, where the seawater circulating pump was damaged, said Eskom. Eskom assured the country that the nuclear reactor section of the plant was not affected.

Unit 1 was just recently serviced and came back onto the grid on 6 January.

Every 15 to 18 months a unit is shut down for refuelling, maintenance and statutory inspections. Outages are scheduled to avoid having both units out of service at the same time.

*In a media statement published on 11 March, Eskom said it had repaired the fault. The state utility said it was in the process of gaining regulatory approval to synchronize  back onto the grid, which could be by Sunday.

According to Chris Yelland, of EE Publishers there was no fault with the pump.

#Koeberg #misinformation: So it turns out there was actually nothing wrong with cooling water pump that circulates sea-water to the condenser at Unit 1 in the tertiary water loop of @Eskom_SA's Koeberg nuclear power plant. And the pump did NOT have to be repaired after all. pic.twitter.com/TA6ozTtbwU

"The tertiary loop tripped out as it should when there was a low water level in the suction inlet pit, caused by an ingress of marine life to the inlet drum screen, which tripped due to high torque, resulting in the low suction pit water level," he explains.

He said the tripping of one of the three sea water circulating pumps of Unit 1 should not have caused the reactor to shut down. But the heat exchanger on the Unit 1 condenser was due for maintenance and was not able to handle the secondary-side heat load with 1 of 3 pumps out of service.

Business Insider have reached out to Eskom for further comment.

The Koeberg plant has been running since 1984 and is the only civilian nuclear reactor generating grid electricity in Africa. Each system is separate from one another because it means that the water in the reactor, which is radioactive but is in a closed system, does not come into contact with the other two systems. This system is kept under pressure, hence the name Pressurised Water Reactor (PWR).

The primary loop transports heat away from the fuel in the reactor to the tubes in the steam generators. The water is then returned to the reactor by means of a pump. This system is closed, and water from it does not come into contact with the secondary or tertiary loops.

Water is heated to 320 degrees Celsius in the nuclear reactor. This is the primary loop. This water then heats water in the secondary loop to boiling point. The steam generated here is used to turn a turbine... ... which is attached to a generator, which produces electricity. After the steam has been used to drive the turbine, it is sucked down into the condenser, where the third loop uses seawater to cool and condense the steam back to water. The condenser is designed to ensure that the steam or water, called the condensate, does not come into contact with the seawater, thereby creating a third barrier between the primary coolant and the environment.

Then condensate is pumped back into the generator for the process to start again. The water that is used to cool the steam at Koeberg is pumped from an intake basin on the Atlantic Ocean.

The kelp and ocean debris is separated using rake screens. 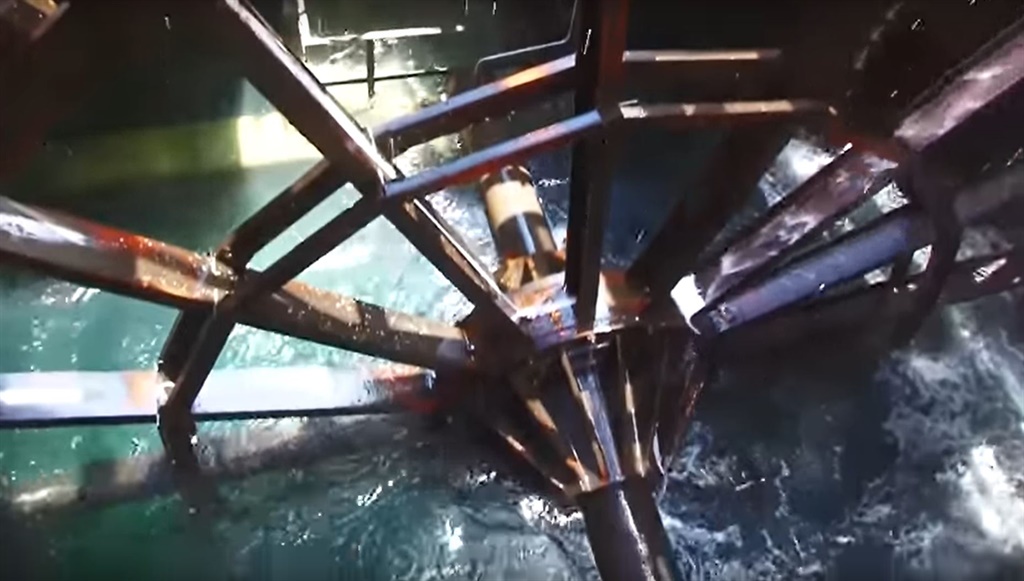