Covid-19: Artists are playing live concerts from their homes — here's how to watch them 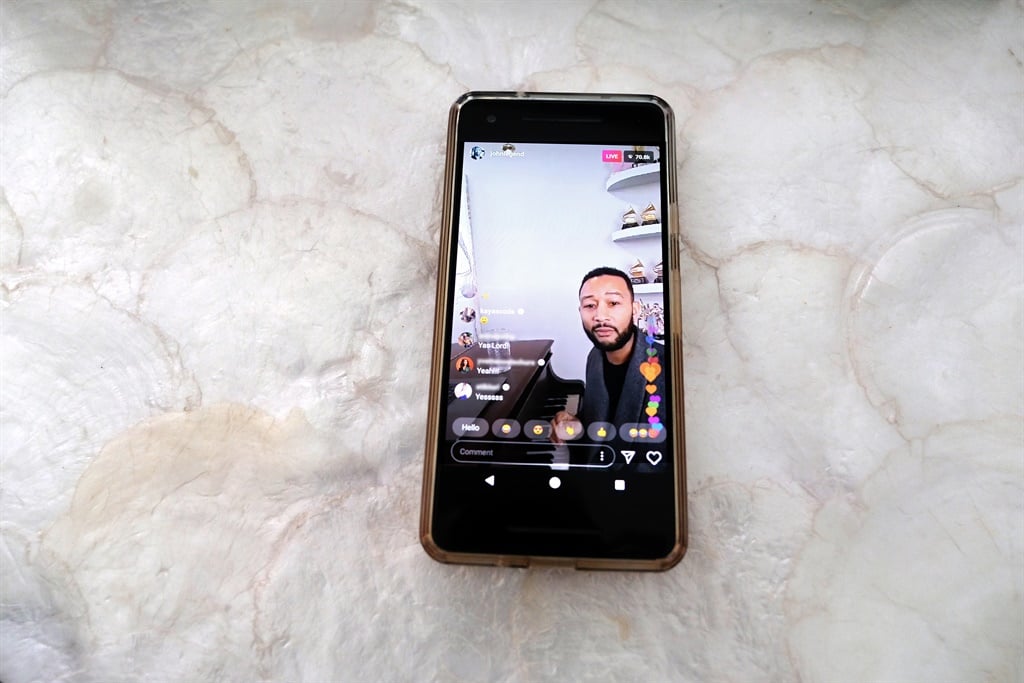 The coronavirus outbreak has caused mass cancellations of tours, concerts, and festivals. But some artists have remained determined to connect with fans through live music.

Musicians like Coldplay's Chris Martin, John Legend, Pink, Keith Urban, and Diplo have been livestreaming music and posting concert videos on social media. Below, Insider has compiled a running list of the performances you can watch online.

Chris Martin has helped launched "Together At Home," an initiative supported by Global Citizen, which is billed as a series of online concerts in order to promote social distancing.

The Coldplay frontman played "a mini gig at home" during a 30-minute livestream on Tuesday. The video is now watchable in an Instagram post.

Legend also performed music on Instagram live as part of "Together at Home."

John Legend livestreamed for nearly a full hour on Tuesday, which is now watchable in an Instagram post. He covered songs like Stevie Wonder's "Love's in Need of Love Today" and performed his own hit "All of Me," all while playing the piano. Legend even previewed a new song, titled "Actions," from his forthcoming album.

The livestream also featured a cameo from Legend's wife, Chrissy Teigen, who sat on the piano in a towel and sipped from a wine glass.

Legend teased upcoming installments of "Together at Home" from Miguel and Charlie Puth. Teigen called for Ariana Grande to join in and perform online - which was captured by a tweet that Grande liked, indicating the possibility of her involvement in the future.

Charlie Puth sang hits like "Attention" and "See You Again" during a "virtual concert" at his parents' house. Charlie Puth became the next musician to take part in "Together at Home" when he livestreamed a piano-dien performance on Wednesday, which you can now watch in a post.

The singer-songwriter encouraged viewers to "stay home, wash your hands," and visit Global Citizen's website to learn more about slowing the spread of coronavirus.

"When they asked me to be a part of this, of course, I said yes," he said of the organisation. "Encouraging people to keep practicing social distancing - but why not have some fun and listen to some music while you're doing that?"

Niall Horan played songs from his new album during an acoustic set on Instagram live.

Niall Horan took part in "Together at Home" with a livestreamed performance on Thursday. The "Heartbreak Weather" singer played old songs, covers, and a few tracks from his new album, including "No Judgement," "Nice to Meet Ya," and "Black and White."

"The more self-isolating we do, the quicker we can get rid of this," Horan said in the video, shouting out Taylor Swift for encouraging her fans to cancel plans and stay home as much as possible.

"Many thanks to @glblctzn and @who for having me be a part of this terrific series," Horan wrote in the caption.

Hozier will be performing Friday on Instagram live at 3 pm EST. Hozier is up next for Global Citizen's "Together at Home" concert series. You can watch him perform Friday on Instagram live at 7 pm GMT, 12 pm PT, and 3 pm EST.

The "Take Me to Church" singer is even asking for song requests on Twitter.

OneRepublic will be performing Friday on Instagram live at 4 pm EST. OneRepublic is also taking part in "Together at Home." Frontman Ryan Tedder and bassist-slash-cellist Brent Kutzle will perform on Instagram live at 8 pm GMT, 1 pm PT, and 4 pm EST.

Noah Kahan is going live on Friday at 5 pm EST. "Going live at 5 pm eastern," the "False Confidence" singer wrote. "get used to it let it marinate then shoot me a DM with what you want to hear."

"Free concert slash piano lessons from my heart to yours," Pink wrote on Instagram, alongside a video of her playing guitar and singing "To Make You Feel My Love."

Death Cab for Cutie's Ben Gibbard will livestream performances from his home studio every day.

Death Cab for Cutie frontman Ben Gibbard announced on Tuesday that he'd be "playing songs everyday from my home studio" over the next few weeks. The indie rocker will stream the performances on YouTube and Facebook at 4 pm PST. Gibbard also teased the possibility of having "a guest or two stop by digitally."

"I know you are all really freaked out right now. I am too," Gibbard wrote on Twitter. "And while I'm proud that we're all doing the necessary things at the moment to help flatten the curve, I know it has left us all incredibly isolated."

"But because we're all going through this nightmare together we are quite literally NOT alone. Our lives and stories are all linked, maybe more now than they have ever been."

Katharine McPhee said on Tuesday that she and her husband, Grammy-winning composer David Foster, would livestream a joint performance on Instagram every day at 5:30 pm PT. She also encouraged fans to comment with song suggestions.

Keith Urban streamed a performance in his Nashville warehouse live on Instagram.

Keith Urban performed for 30 minutes in his Nashville warehouse and streamed it live on Instagram. The video, which features a cameo from Urban's wife Nicole Kidman, is now watchable in an Instagram post.

"Even though we can't be in front of all of you guys tonight, I want to be able to play some songs and bring some entertainment to wherever you guys are watching," Urban said.

Hunter Hayes also streamed a performance from a Nashville warehouse.

Hunter Hayes also performed live from a warehouse in Nashville, which you can watch now on YouTube.

"Even at a time like this, music is a powerful healing agent," Hayes said.

On Friday, Diplo livestreamed an hour-long, low-key DJ set he dubbed "Corona Sabbath," which is now available to watch on YouTube.

Two days later, he spun a more upbeat mix alongside a group of friends, including dancer (and Savage x Fenty fashion show choreographer) Parris Goebel. He dubbed the second livestream "A Very Lazer Sunday," which is also available to watch on YouTube.

L Devine was meant to go on a European tour with pop singer-songwriter Fletcher, but it was postponed. So, instead, the "Boring People" singer announced an online "URL tour," a series of five shows that will each be streamed live on a different platform: Instagram, Twitter, Facebook, TikTok, and YouTube.

"I thought it would be cool to do something virtual that we can all be a part of," she wrote on Twitter. "Hope to see you at a show lol."

Nashville-based musicians Allen Thompson and Rodney McCarthy launched Virtual Festival, a series of performances from local artists that will be livestreamed each night.

"We are a group of Nashvillians ranging from musicians to publicists to medical sales professionals. The one thing that ties us all together is our love for music," the official Facebook page reads. "Virtual Festival was founded in direct response to the closures of festivals, venues, and tours due to the Covid-19 pandemic. Virtual Festival seeks to offset the losses of the entertainment industry by offering streamed performances by bands across the country, with fans donating directly to musicians via PayPal and Venmo in lieu of ticket sales."

On Monday, Yungblud played an hour-long set on YouTube. The high-energy performance even featured a brief intermission with cameos from Machine Gun Kelly and Bella Thorne, whom he invited to play a drinking game.

"having the ability to connect with you ain't gonna get taken away. f--- that. i can't wait to see you," he previously tweeted. "tell ya fookin mates. CONCERT MONDAY 7AM PST."

"i want the show to feel as real as possible," the rocker added, encouraging fans to tweet pictures of their outfits and videos of themselves "moshin in your room."

American Public Media's radio variety show "Live From Here," hosted by musician Chris Thile, announced a series of virtual concerts on Sunday: "Ahoy! In the midst of these strange times, we're starting the #LivefromHome stage, a digital space for us to keep making and experiencing art when we can't be physically together."

All performances will be available to watch onn YouTube. The first installment featured Thile covering Wilco's "Radio Cure." Artists are encouraged to post their own performances on social media using the #LiveFromHome hashtag.

Christine and the Queens will livestream performances every day on Instagram.

Christine and the Queens will play music live on Instagram, around 6 pm EST every day.

"I'll find a way to deal with the ENNUI," she wrote on Monday, alongside a 14-minute performance. "Guests and weird concepts included." Luck Reunion 2020 will be the first major music festival to be fully livestreamed amid the coronavirus outbreak.

Organisers had previously announced the postponement of the annual country festival. But instead of rescheduling or simply canceling, performances will be broadcast for free online.

The five-hour event kicks off on Thursday at 6 pm CT. Fans can watch the festival on Luck Reunion's website, Facebook, or on the streaming platform Twitch.

The lineup features sets filmed live by the artists themselves - many from living rooms, bedrooms, or home studios - and confirmed acts include Nelson, Margo Price, Jewel, and Nathaniel Rateliff.

Rolling Stone is launching an IGTV series titled "In My Room," with self-filmed sets from artists released every Monday, Wednesday, and Friday.

On Wednesday at 3 pm EST, Rolling Stone launched a new IGTV series titled "In My Room." New episodes will be released every Monday, Wednesday, and Friday at the same time, featuring legacy artists as well as up-and-comers.

"The first episode kicks off with Brian Wilson singing his classic songs from his California home," the announcement reads. "It will be an intimate, unforgettable experience that you won't want to miss."