One of the most remarkable experiments in history - a trio of giant machines that listen for ripples in spacetime called gravitational waves - just got more powerful and precise.

That's thanks to a new light-squeezing instrument that researchers installed in the experiment's main machine: the Laser Interferometer Gravitational-wave Observatory (LIGO). Its Italian counterpart, Virgo, got a similar tool.

The instrument, called a quantum vacuum squeezer, is the latest in a series of upgrades to the gravitational-wave detectors, which are opening a new field of astronomy and changing how we understand the universe.

By squeezing photons on the quantum level, the instrument ensures the particles produce fewer tiny fluctuations, which reduces background noise and allows LIGO to sense gravitational waves from sources about 15% further away. Such waves usually come from distant collisions between massive objects, like black holes and neutron stars, that bend spacetime - a phenomenon first predicted by Albert Einstein.

"When the rate of detection goes up, not only do we understand more about the sources we know, because we have more to study, but our potential for discovering unknown things comes in," Nergis Mavalvala, a LIGO astrophysicist, said in a press release. "We're casting a broader net."

The latest major upgrade to one of Earth's most ambitious experiments A worker inspects quartz fibers that suspend a mirror inside the Virgo gravitational-wave observatory.
EGO/Virgo Collaboration/Perciballi

In 1916, Einstein predicted that accelerating massive objects, like neutron stars or black holes, would create ripples or "waves" in the fabric of space and time. However, he didn't think these gravitational waves would ever be detected - they seemed too weak to pick up amid all the noise and vibrations on Earth. For 100 years, it seemed Einstein was right.

But in the late 1990s, LIGO's machines in Washington and Louisiana were built as an attempt to pick up the signals Einstein thought we'd never detect. When two black holes collide, they release massive amounts of energy in the form of gravitational waves that last a fraction of a second.
NASA Goddard

Finally, in September 2015, after 13 years of silence, LIGO detected its first gravitational waves: signals from the merger of two black holes some 1.3 billion light-years away. The discovery opened an entirely new field of astronomy and earned a Nobel Prize in Physics for three researchers who helped conceive of LIGO.

Since then, LIGO and its Italian companion Virgo have detected two other catastrophic collisions. After the black-hole merger, the observatories detected the merging of two neutron stars in October 2017, followed by what scientists believe was a black hole swallowing a neutron star in August. Altogether, the observatories have detected likely gravitational waves more than 30 times.

In October, LIGO and Virgo gained a third partner: the Kamioka Gravitational-wave Detector (KAGRA) in Japan. 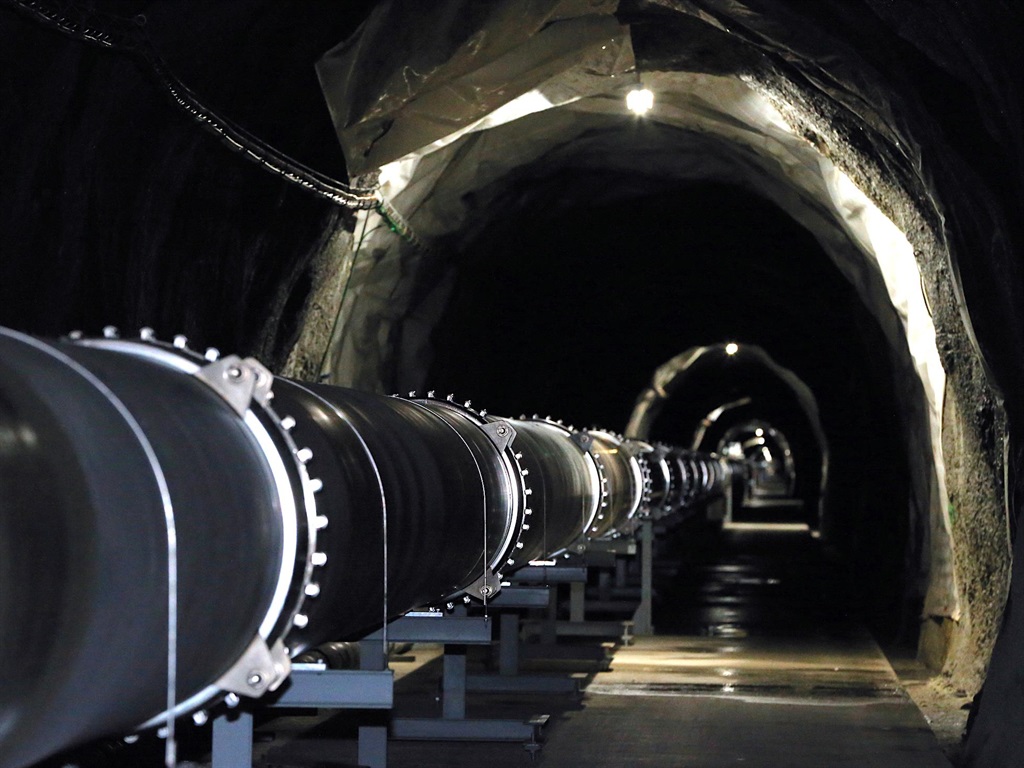 The KAGRA system is housed in a giant L-shaped tunnel located 200 meters underground in Hida, Gifu, Japan.
The Asahi Shimbun via Getty Images

With the help of KAGRA, scientists expect to narrow down the location of massive collisions with three times more accuracy. That would make it much easier for telescopes on Earth to find and confirm the distant collisions responsible for the waves the network picks up.

Between these three machines, the experiment could ultimately detect 100 collisions per year, Vicky Kalogera, an astrophysicist at Northwestern University and LIGO, previously told Business Insider.

The new squeezer instrument brings it one step closer to that goal. 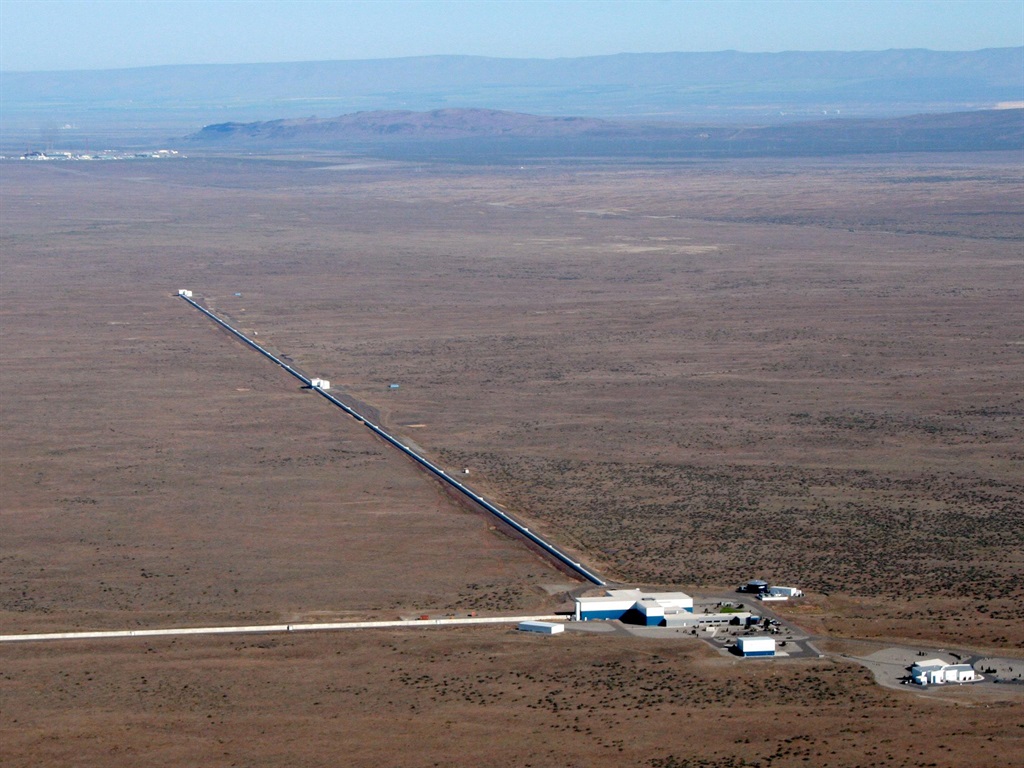 The L-shaped LIGO observatory in Hanford, Washington, is one of three gravitational-wave detectors in operation.
LIGO Laboratory/NSF
Each L-shaped gravitational-wave detector consists of two 2.5-mile-long (4 kilometres) arms. The detector shoots out a laser beam and splits it in two. One of those split beams is sent down one 2.5-mile-long (4 kilometres) tube, while the other goes down the identical, perpendicular tube.

The beams bounce off mirrors then converge back near the beam splitter. When all is still, the light waves return at equal length and line up in such a way that they cancel each other out to the detector.

But when a gravitational wave hits Earth, it warps spacetime - briefly making one tube longer and the other shorter. This rhythmic stretching-and-squeezing distortion continues until the wave passes. When that happens, the two waves of light don't wind up converging at equal lengths, so they don't neutralise each other. That leads the detector to record some flashes of light. Measuring those changes in brightness thus allows physicists to detect and observe gravitational waves that pass through Earth. Once a wave is found, astronomers alert telescopes around the globe, which attempt to zero in on the cosmic event that likely triggered the waves.

The challenge, however, is that LIGO and Virgo are extraordinarily sensitive - when a wave passes, the arms' length changes by less than 1/10,000th of the width of a proton particle. So the detector systems can be easily disturbed, leading to false signals. Even the microscopic movements of atoms in the mirrors can create a false alarm. To mitigate interference, LIGO and Virgo's lasers are shot through a vacuum. But in that vacuum, photons are still constantly created and destroyed. And even that effect can mess with the results.

As the photons quickly pop in and out of existence, "this quantum noise is like a popcorn crackle in the background that creeps into our interferometer," Mavalvala said.

Because scientists can't accurately measure those photon pops, they can't distinguish between that noise and any gravitational wave signals that fall within the same frequency range. A close-up of the quantum squeezer that has expanded LIGO's expected detection range by 50%.
Maggie Tse

The squeezing tool is meant to address this photon problem.

As the photons in the vacuum pop in and out of existence, there are two major things scientists can't measure about them: how many photons there are (amplitude), and when they appear (phase). The new instrument helps with the latter.

At its heart is a laser beam pointed at a tiny crystal surrounded by mirrors. Through the crystal's atoms, the laser interacts with the vacuum in a way that rearranges the photons' amplitude and phase, "squeezing" the vacuum so that fluctuations in the particles' arrival time are smaller. The Virgo device works the same way.

Mavalvala called the ability to manipulate the vacuum in this way "an end-run around nature."

But there's a slight catch to the strategy. "When we squeeze the distribution of photon arrival times, something else must be becoming more uncertain," LIGO team member Maggie Tse said in a release.

In this case, that "something else" is the number of photons in the vacuum (the amplitude), which fluctuates more as a result of the new instrument.

Researchers are also working on a similar filter device to address the amplitude problem.