A jaw-dropping lightning megaflash that snaked across three states in the southern US just won a world record.

A megaflash is not your standard cloud-to-ground lightning bolt. It's an enormous electric zigzag that travels from one electrified cloud to the next, almost instantaneously. A big enough thunderstorm system can allow a megaflash to cover hundreds of miles and light the skies for longer than 10 seconds.

That's what happened over the southern US on April 29, 2020. An enormous bolt of lightning snaked through thunderstorm clouds from just south of Houston to southeastern Mississippi. It stretched 477 miles — equivalent to the distance between New York City and Columbus, Ohio.

On Tuesday, the World Meteorological Organisation certified the flash as the furthest-traveling on record. It's about 37 miles longer than the previous record-holder, which streaked across southern Brazil in October 2018.

The National Oceanic and Atmospheric Administration's GOES-East satellite captured the lightning bolt, as it lit up skies across the South.

The WMO also certified a second record, a June 2020 megaflash over Uruguay and northern Argentina, as the longest-duration lightning flash on record. It lasted 17.1 seconds — just barely outlasting a 16.73-second Argentinian megaflash in 2019, which previously held the record.

The certification of the new record-holding flashes was published in the Bulletin of the American Meteorological Society on Tuesday. "Lightning is a surprisingly elusive and complex natural phenomenon for the impact that it has on our daily lives," Michael J. Peterson, lead author of that certification analysis and an atmospheric scientist at Los Alamos National Laboratory, said in a statement.

"We are now at a place where we have excellent measurements of its many facets, which allow us to discover surprising new aspects of its behavior."

Where there's thunder, there's lightning — and it's dangerous

The locations of the two megaflashes — the US Great Plains and the South American La Plata Basin — are hotspots for major thunderstorms that can sustain such extreme lightning.

"Any time there is thunder heard, it is time to reach a lightning-safe place," Ron Holle, a lightning specialist on the WMO Committee on Weather and Climate Extremes, which assessed the megaflashes, said in a statement. A man is treated by a paramedics after a lightning strike in the water in Venice, California, July 27, 2014.
Jonathan Alcorn/Reuters

The most lightning-safe locations are enclosed buildings, according to Holle. When seeking shelter from lighting, look for the types of buildings that have plumbing, he said, rather than a beach hut or a bus stop. If no buildings are available, a fully enclosed, metal-topped vehicle is the second-safest place.

"As these extreme cases show, lightning can arrive within seconds over a long distance, but they are embedded within larger thunderstorms, so be aware," Holle said.

Lightning strikes to humans are rare, but they do happen. Lightning kills about 49 people per year in the US and injures hundreds more, according to the National Weather Service. The deadliest single lightning flash on record killed 21 people in Zimbabwe in 1975, when they took shelter in a hut, according to the WMO. 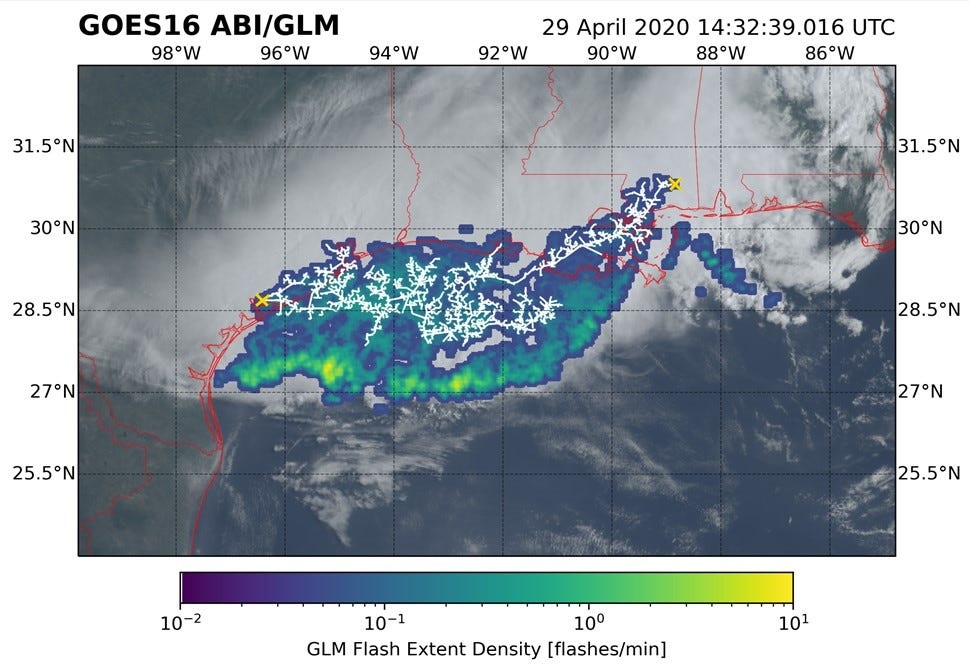 In the past, meteorologists have relied on ground-based surveillance technology to map lightning flashes. But satellites high above Earth can see a much wider swath of the planet, allowing them to capture the full extent of a megaflash in just one image.

"Now that we have a robust record of these monster flashes, we can begin to understand how they occur and appreciate the disproportionate impact that they have," Peterson said, adding, "There is still a lot that we do not know about these monsters."