These are the most expensive Lego sets on shelves in South Africa - with one currently fetching R18,000 Lego is one of the most popular gifts to give at Christmas around the world. According to James Clarke’s The Year of the Geek, Lego usually sells an average of seven sets every second during the course of the year - but come Christmas, this quadruples to 28 sets sold every second.

South Africa is no exception - this year,Toys R US predicts Lego will again be one of the most popular items to appear under Christmas trees in this country.

But not all Lego sold in South Africa is destined for Christmas stockings or playroom floors. The more complex sets are typically targeted towards adults and should probably come with insurance policies of some kind.

The top ten most expensive Lego sets currently on sale in South Africa cost upwards of R6,000 - with one currently fetching R18,000.

These aren’t bundled sets or amazing one-off Lego builds, either - they are standalone sets that you can purchase online or in stores today.

There are several factors that dictate the high costs of these sets - availability, popularity, complexity and exclusivity all play a factor. And to add to the hype, Lego regularly retires certain sets - classifying them as hard to find collectors items that can grow significantly in value over the years.

Here are some of them. The 7,500 piece Lego Star Wars Millennium Falcon set is consistently one of the most expensive Lego sets sold in South Africa, and the world, and it’s also increasingly difficult to get hold of. Last year,Great Yellow Brick was selling it for R14,000, but they no longer have stock. The only stock Business Insider South Africa could find was at Kiddiwinks, where their last remaining set is selling for just under R18,000. The 4,784-piece Star Wars Imperial Star Destroyer costs R13,000 at Great Yellow Brick. They currently only have two in stock at their online store. On display, the model measures 44cm high, and is more than one metre long. The Star Wars Slave I.

The Lego Star Wars Slave I Ultimate Collector’s Series edition is a hard to find set around the world - but if you can track one down, it’s also likely to be one of the most expensive. Kiddiwinks is currently selling this version for R7,940. The model features a rotating cockpit, dual shooters, and wings for both flight and landing mode. It has 1,996 pieces, and measures 43cm long when finished. 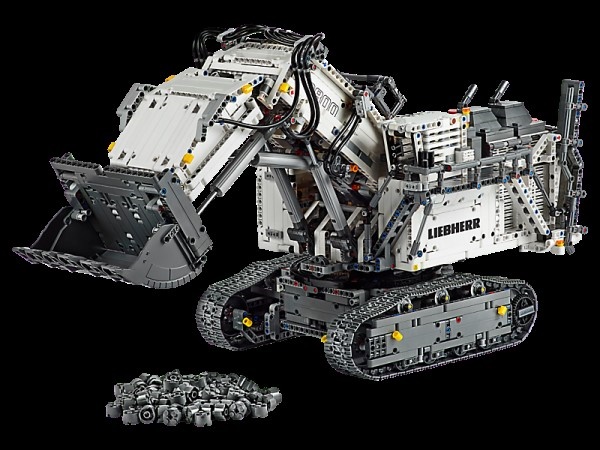 This Lego Technic excavator is a replica of the real thing. It’s the most expensive non-Star Wars set currently available in South Africa, and attracts the impressive price of R7,800. This is due to its advanced tech - it’s operated by an app, and powered by seven motors. It’s in stock at both Great Yellow Brick and Kiddiwinks for R7,999 and R7,800 respectively. The Hogwarts Castle from Harry Potter.

The Hogwarts Castle from Harry Potter has been made into a high-end Lego set, and in South Africa you can expect to pay R7,000 for it - provided you can find stock. Great Yellow Brick has just two available on its online store. The set includes four Lego mini figures, 27 micro figures, a moving staircase, and several buildable accessories. The Sandcrawler from Star Wars.

The hard to find Sandcrawler from Star Wars is another pricey set that’s available locally - though Kiddiwinks has just two in stock. There are smaller versions in stock at other local stores, but this set justifies its high price by including nearly double the pieces, several movable parts, and seven mini figures. Completed, it’s nearly half a metre long and 24cm high. The Lego model of the Sydney Opera House As with the drivable version, the Lego Bugatti Chiron is not a cheap purchase. The 3,599 piece, 1:8 scale model car comes in at around R6,240, and there’s stock available at both Kiddiwinks and Great Yellow Brick. Lego developed the car in partnership with Bugatti to get the “gleaming aerodynamic bodywork, logoed spoked rims with low-profile tyres, and detailed brake discs” just right. The Disney Train and Station.

The Disney Train and Station is one of the newer pricey sets available on the market. It’s a 2,925 piece set that includes several popular Disney characters, a movable train, and a full station to build.Great Yellow Brick has exclusive access to this set in South Africa at the moment - and it’s currently going for R6,000. Ewok Village has officially been retired by Lego, but there are still some sets floating around. This hard to find status makes the 1,990 piece set one of the most expensive. The set features a secret Lightsaber stash and a tree trunk hideout - and you can buy it from Kiddiwinks for just under R6,000.

Related Links
Best Gifts for kids 2019: toys, gadgets, ideas and what not to buy
These will be the most popular toys in South Africa for Christmas 2019, Toys R Us predicts
Checkers is launching new Lego-like collectables – and you can build an entire store
Next on Business Insider
Captive lion operators to be offered a ‘voluntary exit’, which may not see the lions put down