The "Grudge"/al-Ba`sa - An inhabitable wall constructed to block the sea view for the plot behind.
Sandra Rishani

According to a Lebanese urban myth, one man turned sibling pettiness into an extreme sport when he erected the country's thinnest habitable building in front of his brother's property. His intentions were simple - to block his brother's seafront views and devalue the property.

Situated in the Manara neighborhood of Beirut, the skinny building is known by locals as "al-Ba`sa," which loosely means "the Grudge" in Arabic. It is just 2 feet wide at its narrowest point, 14 feet at its widest, and was built in 1954 after the owner reportedly received a less favorable plot of land than his brother and wanted revenge by way of inconvenience.

The unique story has been picked up by media outlets across the world, with International Business Times covering it after a tweet about the building garnered thousands of likes, and the Guardian including it on a list titled "Spite buildings: when human grudges get architectural."

The property gained international attention after urban planner and architect Sandra Rishani researched the building for a collection of forgotten stories entitled "Beruit Re-Collected" in 2014. Rishani was surprised that despite her career background, she had not heard of the Grudge building until her father told her about it, so she took to the streets to untangle the myth. The "Grudge"/al-Ba`sa seen from its widest edge, looking west. The building to the left is the German school in Beirut.
Sandra Rishani

In her essay published on Jadaliyya, an e-zine produced by the Arab Studies Institute, Rishani recalled marveling at how narrow the building was when she approached a concierge from the building next door. '"Yes, I know. It's shocking,' he said, before I had even finished my question. 'It's a wall. But people used to live in it,'" she wrote.

She then returned to her father with questions about the family feud that was said to be behind the pink-hued mystery building.

"There were two brothers who each inherited a plot. Let's call them plot A and plot B. Unable to agree on how to develop the two parts, since plot B was partly reclaimed by road infrastructure, the owner of plot B decided to develop the minuscule piece of land on his own," he told her. "That way, he hoped that his building would block the brother's view of the sea so that the value of his land would decrease."

Rishani told Insider the two apartments on each floor inside the building are beautiful. "I would love to live there! It's a very linear plan," she said. "You enter from a room to another room. The side where the other brother had his land has really high windows so they get a lot of light and then the sea view." 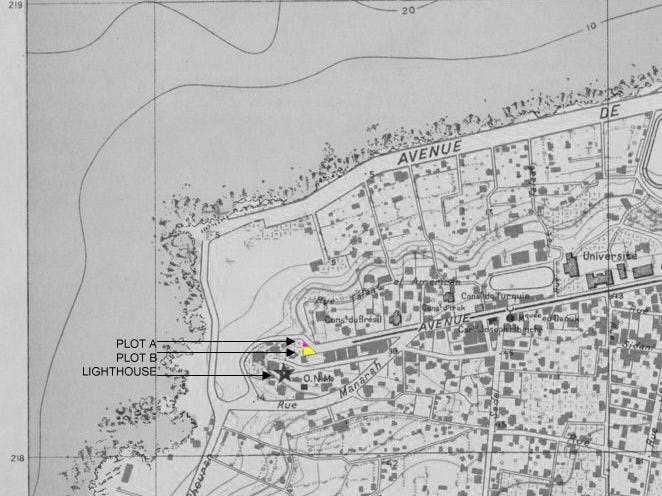 Location map showing plot A (where the "Grudge" was built, and adjacent plot B, and the nearby lighthouse (Manara). Old map of Beirut, adapted by Sandra Rishani.
Sandra Rishani

For Rishani, the Grudge represents more than a funny piece of oral history passed down from elders - it is a story of "empowerment between the system and more powerful stakeholders."

"He was empowered enough to decide, 'I can do something about this. My building might not give me the best profit, but it will definitely drop the price of the land of my brother,'" she said.

The Grudge was also fittingly designed by two brothers, architects Salah and Fawzi Itani. Rishani tried to contact the family who supposedly owned the property at the time she wrote her essay but was unable to reach them. Today, it is not now known who owns the building.

While the space is now empty, it has had played host to many different people in the past. "I know that during the war there was a brothel in the building and there were a lot of refugees," Rishani told Insider. A view from the roof of the "Grudge" building.
Sandra Rishani

Despite this vast history, heritage buildings in Beruit are becoming increasingly rare. Former Culture Minister Raymond Areiji has placed the number of remaining heritage buildings at 500, as a result of urban planning and, more recently, the tragic blast that occurred in August 2020 at the city's port. According to the Middle East Eye, 640 historic buildings, such as museums, religious sites, and cultural landmarks, sustained over $300 million worth of damage.

With so much development and architectural change that has taken place in Beirut, why is this awkward building still standing? The Grudge is not listed as a heritage building, but it cannot be sold to developers due to the city's building and zoning laws.

"According to those laws, no new structure may be built in its place, even if the house is demolished, because the plot has an area that is smaller than what you are allowed to build on," Rishani wrote in her essay.