Watch: A video of a hyena cackling with delight while being tickled has gone viral 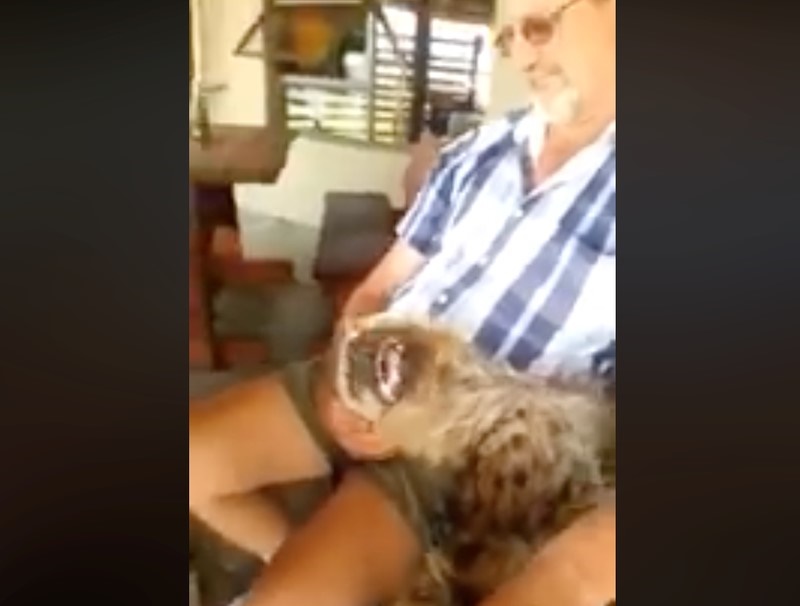 A video showing Petrus, the hyena, laughing has gone viral.

A video of a hyena cackling with joy while being tickled has gone viral on social media.

The hyena, called Petrus, was raised from birth by Nico Roets and his daughter, Charlene van Wyk. They own the Weltevrede lion safari farm in South Africa’s Free State province.

The video was taken in 2016, when Petrus was around eight months old. It has been viewed by at least half a million people on Facebook, where it was first published on the South African Hunters' page.

“It was just after we gave him his (milk) bottles and he was a bit quieter than usual,” says Van Wyk. She says hyenas are very loud animals, and Petrus is no exception.

“Until he got his bottles, and a bit of attention, he would not stop screaming.” He loved being rubbed, she said.

Hyenas can be aggressive towards humans, particularly to men, Van Wyk says. “They want to be dominant.”

There have been recent reports of hyenas attacking humans in South Africa and Zimbabwe. In one horrifying incident, a sleeping fifteen-year old boy was mauled by a hyena in the Kruger National Park.

Hyenas can be found in Asia and Africa, and usually travel in female-led packs.  Adult hyenas resemble large dogs, weigh up to 80kg, and are known for their cries that sound like human shrieks.

They are cunning hunters, and usually target the most vulnerable animal in a herd.

These days, Petrus lives in a nature park created at South Africa's Vredefort Dome - the largest meteor impact site in the world. Van Wyk says he was moved there after being paired with a female.

Related Links
The first-ever jaguar cub born by artificial insemination was likely eaten by its mother 2 days...
This photographer takes photos of dogs trying to catch treats, and the results will bring a smile...
This ancient sea creature had 18 tentacles that funneled food into its gaping mouth — and it may...
Next on Business Insider
Most graduates want to work for the government and state institutions. But for noble reasons.