South Africa's latest luxury field glamping experience was recently launched in the Western Cape's Overberg region. But it won't stay here for long, as lavish tents, a fine-dining restaurant, and a wood-fired hot tub all travel to some of the province's most scenic spots.

Glamping – a hybrid of "glamorous" and "camping" – offers travellers a taste of the great outdoors with a sense of style. The term was only introduced to the Oxford English Dictionary in 2016 but has been a staple of South Africa's tourism offering for far longer, particularly among the country's many diverse and expansive private nature reserves.

The dirt road heading inland from Botriver winds comfortably around the base of the Hottentots Holland Mountain range. Roughly halfway to Theewaterskloof Dam along Van Der Stel Pass, a path traversing the valley and hillsides points to a narrow plume of smoke in the distance. This route beyond the entrance to Porcupine Hills Guest Farm, with its narrow dips and rises, isn't as comfortable. But any apprehension melts away rounding the foot of an unsuspecting hill. Ten tall grey canvas tents curve in a horseshoe at the base of the valley. Smoke rises from a log fire in the centre of the camp, a stone's throw away from an elevated structure offering the glow of warm lights through full-sized glass windows. There's a hot tub.

None of this was here two months ago. And in two months' time, visitors will find an empty field.

"I like to call us a village on wheels," says Samara Stern. "We come, we're there, and we're gone again."

"The only thing that you're going to see that [will tell you] we were here is the grass that grew underneath the tents," adds Dez Lundy. Canvas Collective Africa, founded by Stern and Lundy during the height of the Covid-19 pandemic, which decimated the tourism industry, only stays in one location for between two and three months. After the Overberg, the entire camp is loaded onto 10-ton trucks and moved, first to Biedouw in the Cederberg for the spring flower season and then to Witzenberg near Tulbagh.

"We pick everything up, and we move it. Logistically it is a nightmare… but we're doing something that everybody else is not doing," says Lundy, who has more than a decade's worth of experience in setting up and tearing down event-specific tented camps in South Africa, Zimbabwe, Namibia, and Botswana. 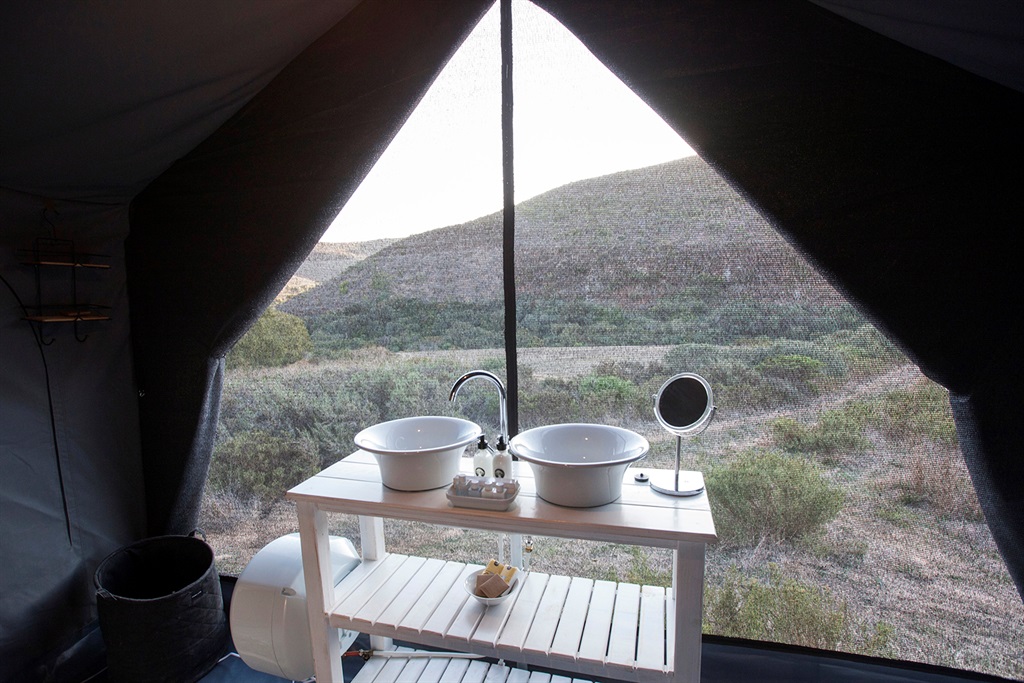 Canvas Collective Africa's tents, roughly the size of a studio apartment, are unassuming on the outside. Inside, guests are greeted by hotel suite opulence.

A king-sized bed, fit with an electric blanket, doesn't overwhelm the interior. Bed-side tables support designer lamps, a bar fridge holds a selection of snacks and drinks, and a Nespresso machine pumps out a piping hot cup. All of this is powered by a generator which supplies the camp with electricity between 07:30 and 22:30. Outside of those hours, it's left to oil lamps, solar-powered lights, and thick blankets. An ensuite bathroom, with added privacy coming from a pulldown canvas screen, has basins with hot and cold running water, a rain shower, and a flushing toilet.

It's easy to forget you're in a tent, in the middle of a field, surrounded by rolling hills and winding valleys under a wide, piercing blue sky. The view through the mottled canvas stretching across the bathroom area is a good reminder. The luxury extends to the Field Kitchen fine-dining restaurant, which serves a menu influenced by the surroundings. What's plated in the Overberg will be different to what's prepared in the Cederberg. The mobile glass, steel, and canvas cabin, with floor to ceiling glass walls, can accommodate all 20 guests at once.

Three-course meals are prepared by renowned chefs, like Mechell Spann, Greg Henderson, and Peter Goffe-Wood, when most tents are occupied. At other times, Stern and Lundy – supported by their dedicated kitchen staff – are behind the plates. And while the tents and restaurant draw people in, a wood-fired hot tub blanketed under a cloud of steam piques the most interest, especially on a cold autumn evening. The tub's water is circulated by a carefully concealed and silent pump through pipes spiralled around a fire. Its steamy allure entices bathers as the sun dips behind auburn hills, giving way to the unadulterated night sky. The entire experience is priced at R6,500 per tent per night that accommodates two adults.

Finding scenic locations for this tented lodge isn't the hard part, says Lundy, who's well-travelled and has a bucket list of prime spots, but getting landowners to agree to Canvas Collective Africa setting up camp can be tricky. 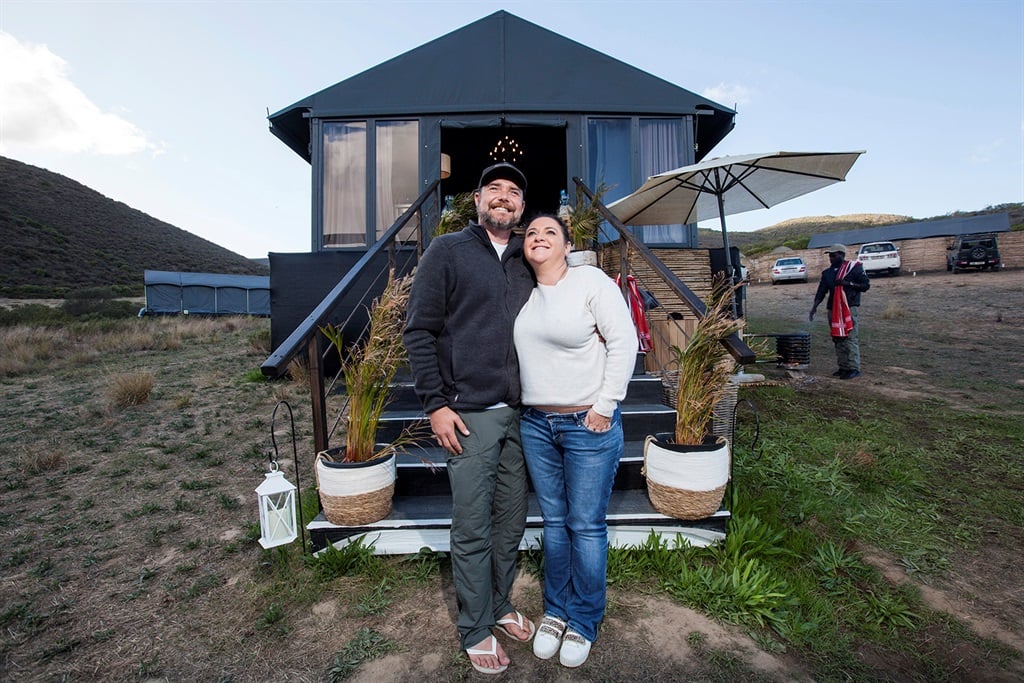 "I literally go and scout. I go to the farmer and ask if they're open to something," says Lundy, adding that use of the land is done according to a simple lease agreement with the owner.

"It's been a bit challenging. We thought it was going to be a bit easier. One thing we've struggled with is finding land because everybody, in this area, especially, says if there's [open] land, they're planting grapes." Despite these challenges, Canvas Collective Africa has secured three locations – Overberg, Cederberg, and Tulbagh – on rotation for the next five years.

"For me, everything runs around the experience. I want people to leave and think, 'gosh, that was incredible'," says Lundy.

"That's why me and Sam do this, we want to look after people. We want families to be happy, and grow, and learn." Luke Daniel was a guest of Canvas Collective Africa.