The eruption continued into the night.
Desiree Martin/AFP via Getty Images

The Cumbre Vieja volcano on the Spanish resort island of La Palma erupted on Sunday for the first time in 50 years, leading to the evacuation of thousands of people. The Canary islands are about 67 miles off the northwest coast of Africa. La Palma is one of the smaller islands in the archipelago.
Screenshot/Google Maps

La Palma, one of Spain's Canary Islands in the Atlantic Ocean, is a popular tourist destination among Europeans. The island is home to 85,000 people.

As molten streams crept down forested hillsides toward villages, the government ordered the evacuation of some 5,000 people. On Sunday, the government said it doesn't expect to have to displace anymore residents.

Authorities first confirmed the eruption at 15:12. 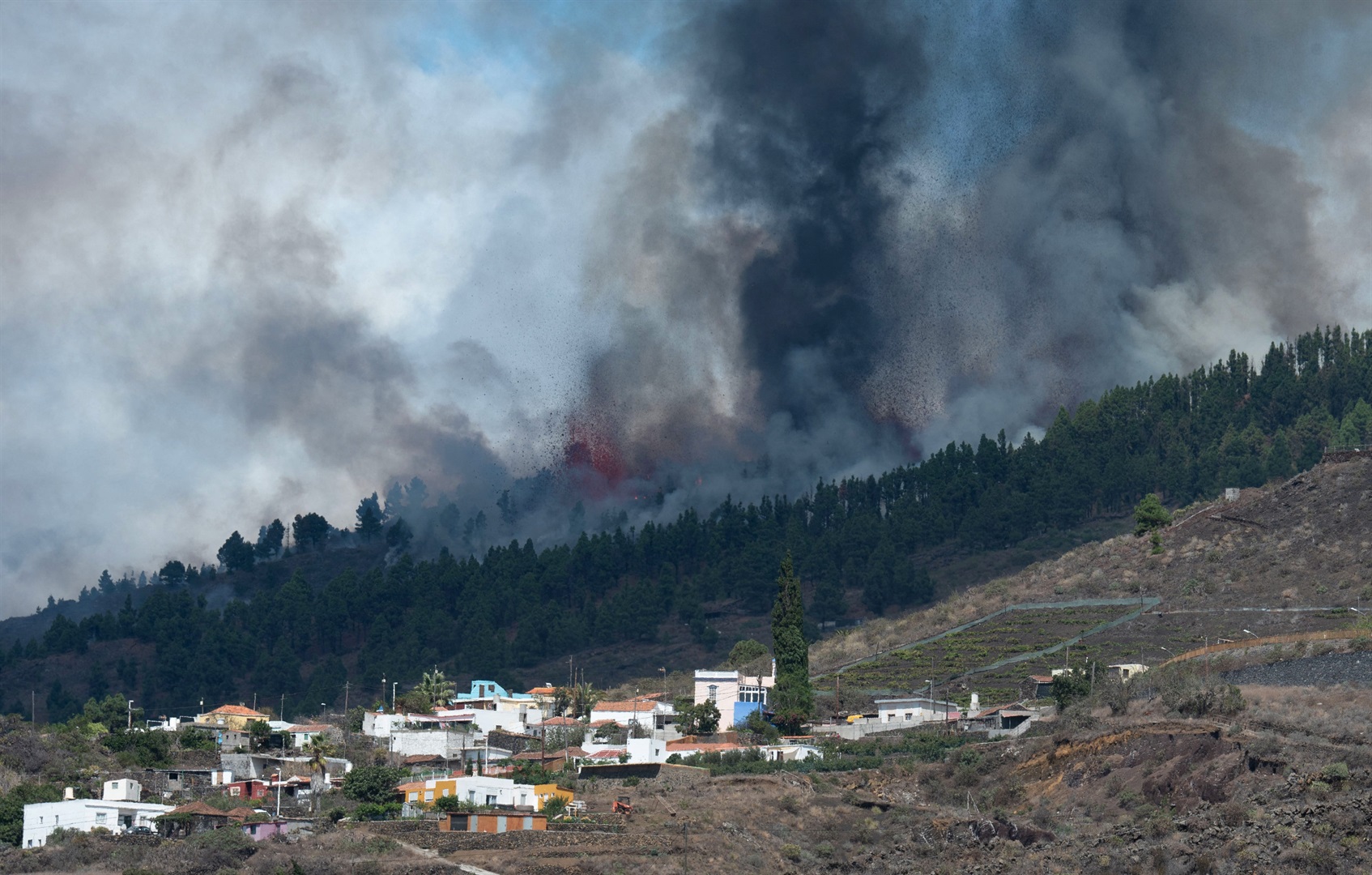 Smoke columns and plumes of ash can be seen in the distance.
DESIREE MARTIN/AFP via Getty Images

A local committee for volcanic emergencies said they confirmed the beginning of the eruption at around 15:12.

Smoke and ash began pouring out from fissures in the Cabeza de Vaca area, reaching up to 1,524 metres in the sky, estimated the committee.

The eruption has sent lava edging through surrounding forests.

Authorities said red hot lava streams are headed for the coast, and that forest fires are emerging across the region.

The surface temperature of the lava was recorded at around 1,075 degrees, they added.

The surrounding area is sparsely populated and no one has been reported injured so far, said the Canary Islands government. The damage, they said, will be largely material as the lava has already destroyed eight homes.

Resident Carlota Martín told the AP she heard a huge explosion while she was at her family's agricultural plot downhill from the eruption. "When we saw the column of smoke, we thought it could not be real, but it kept growing and we knew we had to get out of there," she told the AP.

"You leave, but you are also looking back because you want to see what will happen. Nobody knows how the lava flows will descend, but our plot and lots of houses in the area could be in the way."

There are at least five fissures spilling lava onto the Western hillside, reported Reuters. Some of them are up to 200 metres long, said the government. 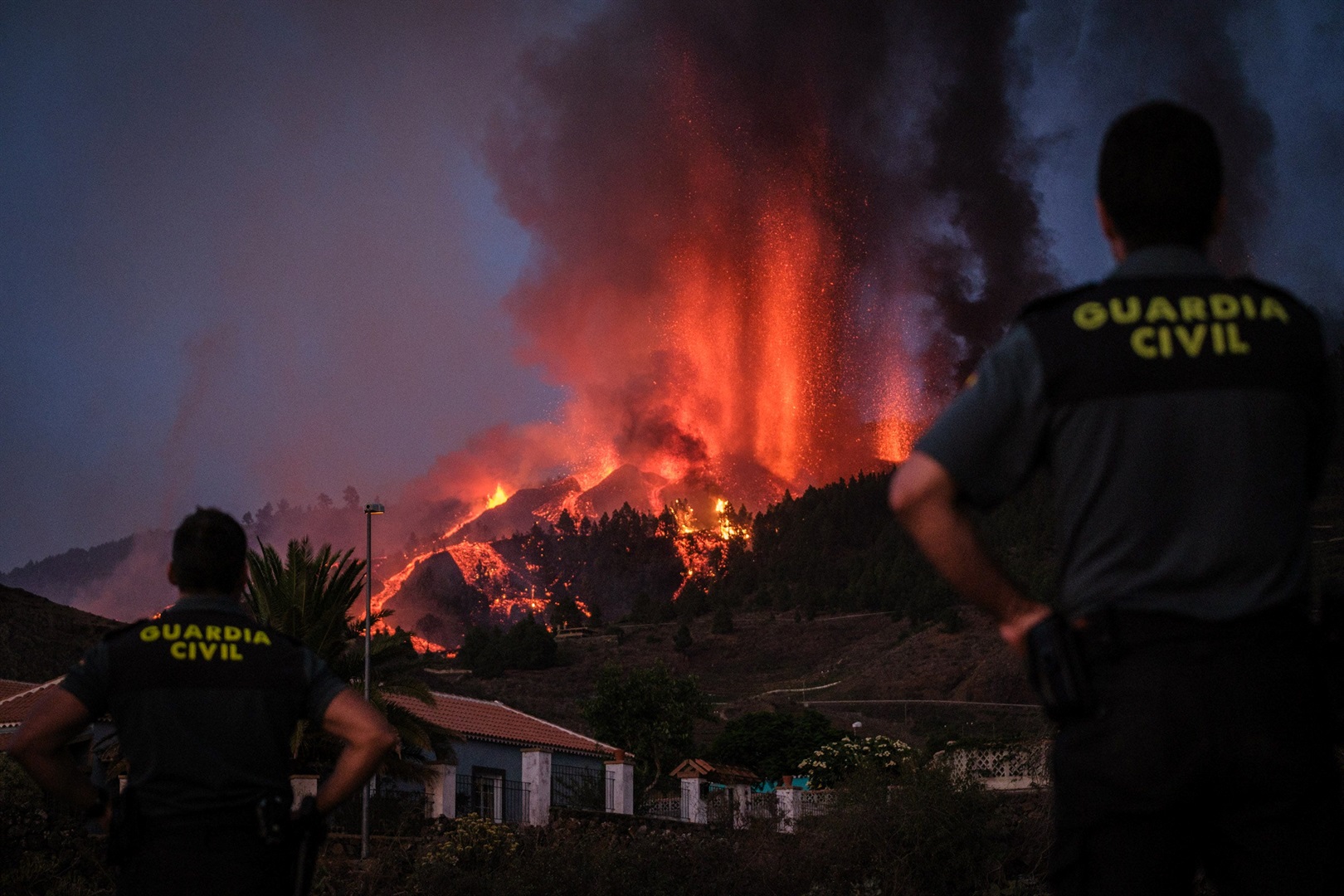 As the eruption progressed, the Spanish Civil Guard said it had sent reinforcements to La Palma to facilitate in evacuating 5,000 people.

Firefighters and emergency workers from larger neighboring islands were also sent to La Palma to help with the rescue and evacuation effort, reported The New York Times.

Authorities have closed off nearby roads and urged the public not to approach the lava flows. "Citizens are also reminded that they should not go near lava flows due to the risk of being exposed to the gases emitted, possible landslides and high temperatures," said the Canary Islands government.

Four villages were evacuated a few hours after the initial eruption, per Reuters. Lava streams began pouring down to nearby villages.
DESIREE MARTIN/AFP via Getty Images

Several hours after the eruption, lava began approaching homes and farms, with one stream spilling across a road and sweeping through several houses in the municipality of El Paso.

"When the volcano erupted today, I was scared. For journalists it is something spectacular, for us it is a tragedy. I think the lava has reached some relatives' houses," Isabel Fuentes, a local resident, told Spanish television TVE, reported Reuters.

The eruption continued into the night.
Desiree Martin/AFP via Getty Images

The Canary Islands Volcanology Institute wrote on Facebook that in the week prior to the eruption, the region around the volcano had been shaken by 25,000 earthquakes.

Canary Islands president Angel Victor Torres said at a press conference that between 17 million to 20 million cubic metres of lava has emerged so far from the eruption.

The Spanish prime minister, Pedro Sanchez, tweeted that he flew to La Palma after word of the eruption reached him, postponing a trip to the US to attend the United Nations General Assembly.

He said he would work together with local authorities and agencies to plan their next steps.

The last time the volcano erupted was in 1971.

La Palma's last volcanic eruption occurred in October 1971, and lasted more than three weeks. One person died in that event — a tourist who was taking photos of the lava, per Reuters.