A family of warthogs relieved a cheetah of the impala it had just settled down to eat.

The cheetah may be the fastest land animal on earth, but that doesn’t stop lions, hyenas, vultures and even jackals from stripping them of their prey – regularly. And, now, warthogs can be added to the list.

Chartered accountant Shakera Kaloo captured the moment a family of warthogs relieved a cheetah of the impala it had just settled down to eat.

“We entered the park through Crocodile Bridge and about 5 minutes into our drive, we encountered a cheetah with an Impala. We were surprised, as we didn’t expect to be this lucky so soon after arriving in the park. We also haven’t seen a cheetah in the park for years – so this was really spectacular,” says Kaloo.

See also: WATCH | Wild dogs and a hippo battle it out in a watering-hole war

“We watched a while as the cheetah sat close to the food, looking around to make sure that the coast was clear before settling down with its meal. This was when a warthog family approached and steadily made their way closer and closer to the impala.

“Even more surprising than seeing warthogs at an impala catch was the fact that the cheetah did not even fight to protect the meal once the warthogs advanced closer to the food, and instead, walked way, submitting the impala to the warthogs.” 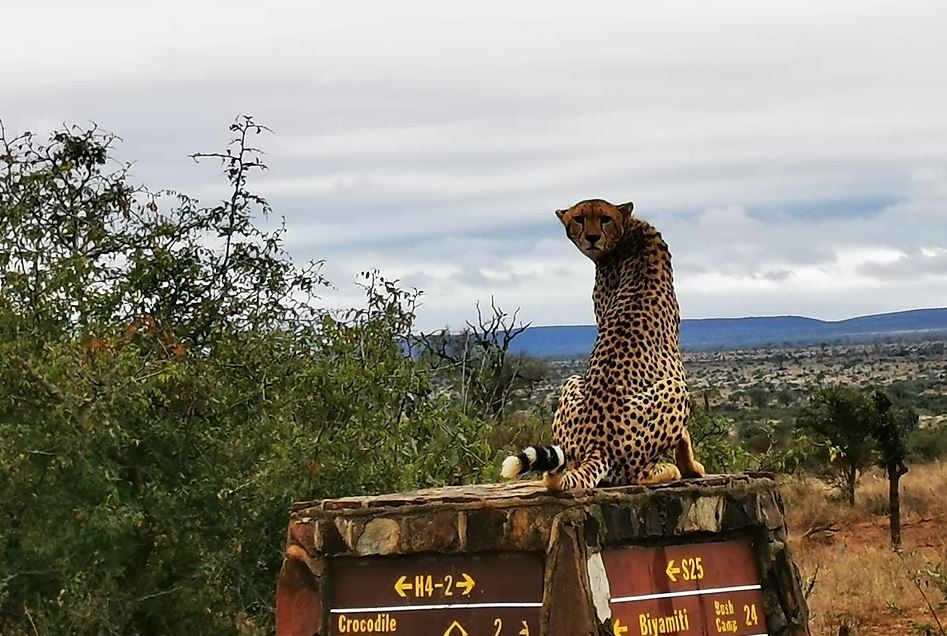 “I was too excited to take pictures, so my children were left with that task. We’ve never seen a warthog doing this, nor did we know that warthogs eat meat from a carcass! The sighting ended with the cheetah walking away from the kill, and it walked along the side and sat on the signpost before moving off into the bush.”

Day visitors have been allowed in the Kruger and most other parks owned by South Africa National Parks, since Monday 8 June, under Alert Level 3 of South Africa’s national lockdown to halt the spread of Covid-19.

During the country’s hard lockdown many South African game reserves offered virtual safaris, including Shamwari Private Game Reserve. There were also livestream webcams available at SanParks reserves, and at other places around South Africa.

"Gate quotas" have been revised to one third of what they were before lockdown, and visitors have to arrive during three allocated time slots.

SanParks has yet to open accommodation facilities.