KPMG on Monday announced that it will close its regional offices, with up to 400 people losing their jobs.

The auditing firm has been struggling to stay afloat amid an exodus of clients, including Absa, Sasfin and DRDGold. On Friday, KPMG also resigned as auditor of the South African Institute of Chartered Accountants, which is currently investigating KPMG.  Over recent months, more details have emerged about KPMG's association with Gupta companies, and its involvement in a discredited report into a so-called rogue unit at the SA Revenue Service.

Recently,  KPMG’s head of financial services auditing was also suspended after corruption emerged at VBS, a client of KPMG.

KPMG has now announced that it only plans to operate in future out of four hubs in Johannesburg, Cape Town, Durban and Port Elizabeth. This was part of a "reshaping" of its business after recent client losses.

A spokesperson confirmed to Business Insider South Africa  that the Bloemfontein, East London, Mbombela  and Polokwane offices will be “closed down entirely”. “This is subject to identifying an alternate proposition in a timely manner.”” 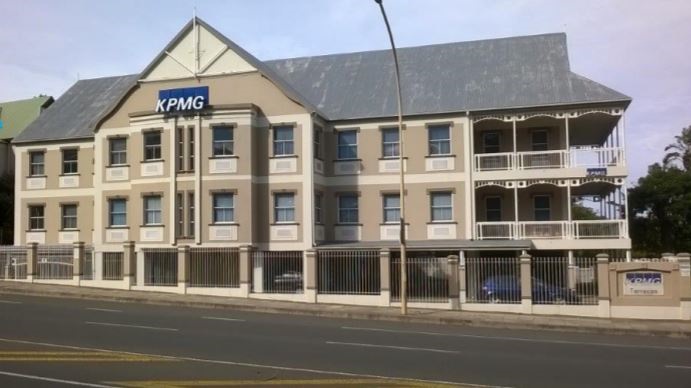 The Pretoria office will be consolidated into the Johannesburg office. All partners and staff will be considered collectively as the Gauteng office, says Nqubeko Sibiya, KPMG communications manager.

This means that KPMG will vacate its new Hillside offices in Lynnwood, Pretoria. KPMG occupied 3,795m² (or almost 90%) of the building, which is owned by property group Atterbury. At the Hillside’s 2017 rates of R147/m² this will save KPMG almost R558,000 a month. Inside the KPMG Hillside office. (Atterbury)

KPMG said it will start consultations about the planned closure of its Pretoria office with Atterbury on Tuesday, a representative of the property group told Business Insider.

The building was only completed in August 2016. It adopted new workplace technology and design: instead of allocated seating for each staff member, employees using mobile devices could work in different areas with colleagues who are busy with the same project. It also has an indoor picnic area, along with a coffee shop and canteen. At the time, Atterbury said it paid R270,000 in extra groundwork to preserve a single tree on the premises.

The fate of KPMG’s other offices – in Pietermaritzburg, Stellenbosch and Secunda – remains uncertain.

KPMG is set to ccupy a new R550 million building in the Cape Town foreshore later this year. The project has been hampered by delays after a main contractor went into business rescue. The KPMG office in Cape Town's foreshore, which is currently being built

Business Insider previously reported that many senior and mid-level staff have already left KPMG in recent months. KPMG faces a number of lawsuits which could strip it of its licence to practice.

Related Links
KMPG: When all else fails, chutzpah takes over
Steinhoff still offers SA companies an 'ethics hotline' – operated by KPMG
Bruce Whitfield: KPMG is running out of time
Next on Business Insider
SpaceX included a controversial NDA when it settled a sexual misconduct claim against Elon Musk