A scaled model of KLM Royal Dutch Airlines' aircraft of the future just took flight for the first time in a milestone event for the Dutch flag carrier's push for more efficient and environmentally responsible aircraft.

Engineers got their first look at what might one day by the new flagship of KLM's fleet in late August when the futuristic-looking Flying-V demonstrator successfully took to the skies above Germany. The remote-controlled flight was the culmination of two-year's work of engineers from KLM and the Delft University of Technology, also known as TU Delft.

The Flying-V differs from conventional aircraft as the fuselage and wings are merged to form one giant flying wing. New long-range aircraft from Airbus and Boeing focus on efficiency through the use of composites and fuel-efficient engines, but flying wing aircraft take efficiency to the next level with a radically new aerodynamically friendly fuselage design that enables longer ranges and better fuel performance.

Researchers say the design will reduce fuel consumption by 20% from today's most advanced aircraft such as the Airbus A350 and Boeing 787 Dreamliner, both of which are currently employed by Air France-KLM, parent company to the Dutch carrier and one of the largest airline groups in Europe.

KLM first announced its investment in designing the craft in conjunction with TU Delft in June 2019 at the International Air Transport Association's annual general meeting in Seoul, South Korea. 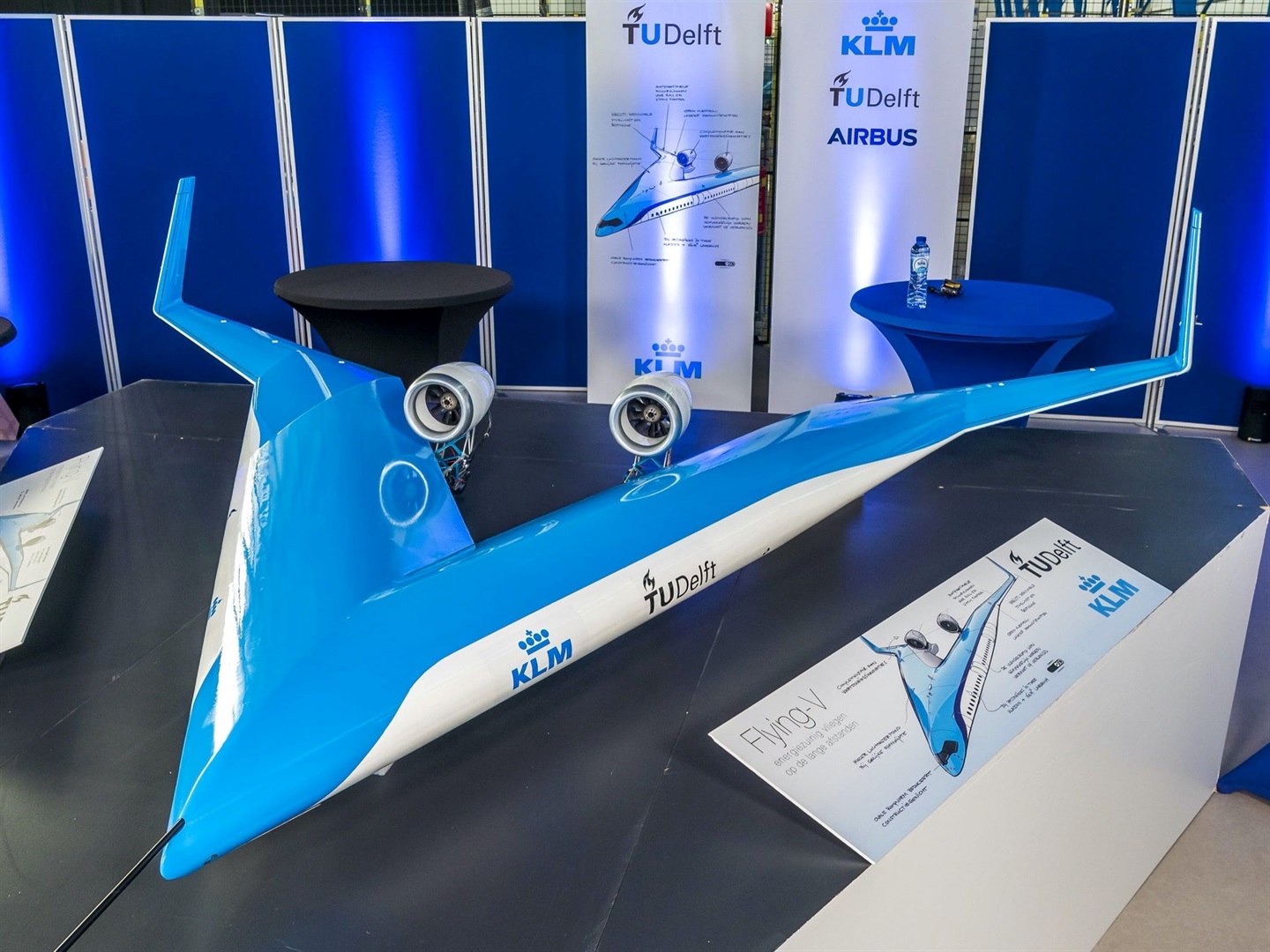 Airlines and aircraft manufacturers are looking beyond today's conventional aircraft into the designs of the future with the flying wing design gaining traction. Industry trends call for smaller and more efficient aircraft in contrast to the golden age of aviation that demanded larger aircraft like the four-engine Boeing 747 that was once required for non-stop long-range travel.

KLM says the Flying-V would have the same wingspan as an Airbus A350 aircraft, which would allow it to utilise existing airport gates and taxiways, a problem Boeing engineers had to solve with the new folding wing-equipped 777X. And despite being able to carry roughly the same number of passengers, the Flying-V will be able to fly farther than the A350 with the same fuel load.

Passenger cabins would likely be split between the two legs of the V-shape fuselage design while turbofan engines powering the wing would rest on top of the fuselage instead of below the wing, a rare but proven design. KLM and TU Delft engineers and researchers headed to an airbase in neighboring Germany for the first flight where the scaled model was manned by a drone pilot directing the aircraft via remote control.

"It's been two years of intense stressful work to reach this moment," Malcolm Brown, TU Delft's chief engineer for the Flying-V testing program, said in a video of the event. "And then, to have it confirmed that it flies, all of that hard work, it was worth putting in all of the hours making sure everything's correct and built properly, built accurately, and it pays off."

Though not a full-size prototype, the scaled model proves that the aircraft is aerodynamically sound and can fly as designed. It's now up to the two companies to build the full-size prototype that can hold passengers and people, an investment potentially calling for billions in research and development. The US military has its own flying wing, a stealth bomber known as the B-2 Spirit that's been serving the Air Force since 1993, according to Military.com. Designed for speed, stealth, and range, the B-2 Spirit can fly up to 6,000 nautical miles, according to the US Air Force, without stopping thanks to its aerodynamically friendly design that commercial airlines hope to one day take advantage of, though flying passengers instead of munitions.

KLM hasn't given a timeline as to when the Flying-V can be expected, but normal aircraft development can last around 10 years from the drawing board to certification.