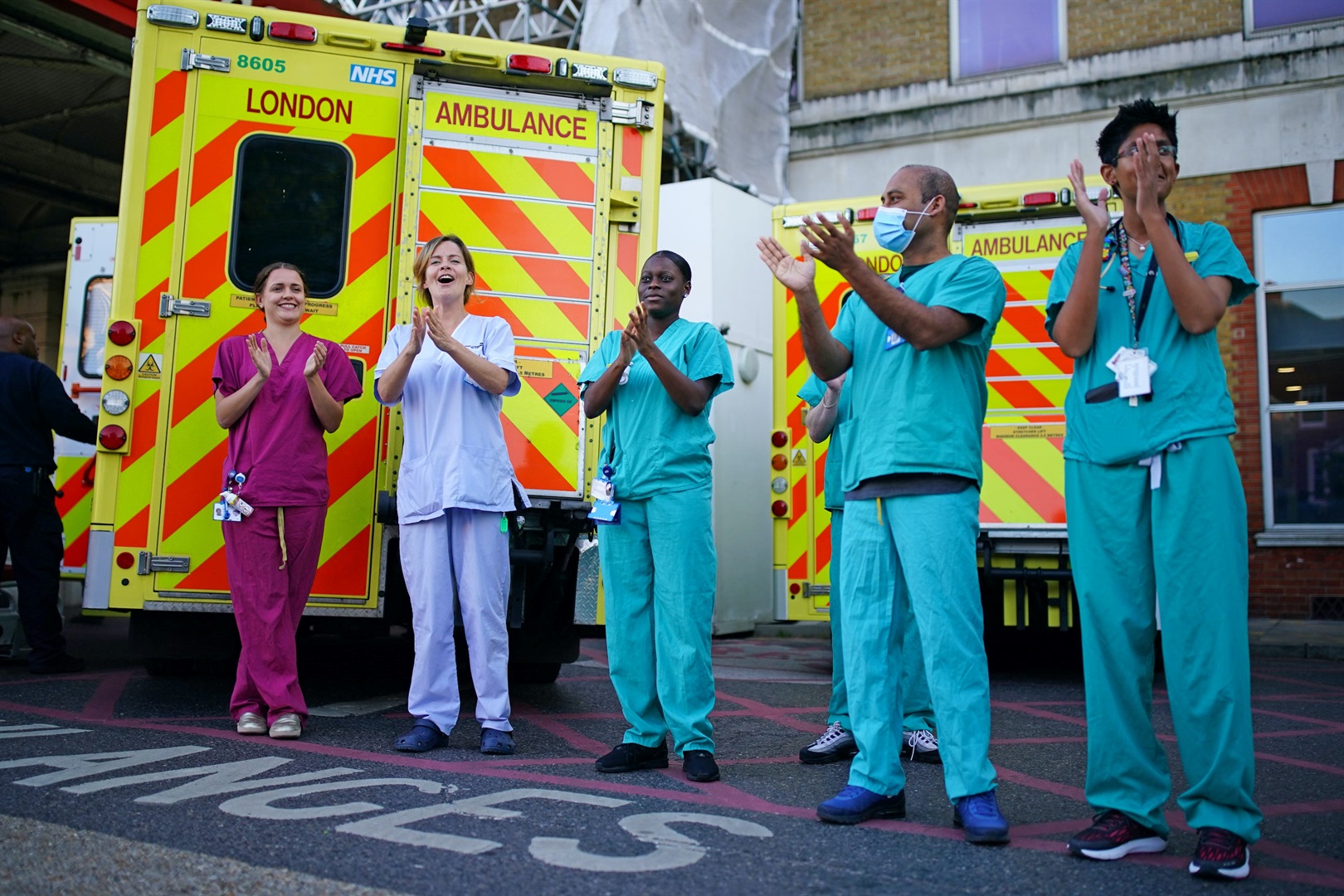 NHS staff outside King's College Hospital in Camberwell, south London, join in the applause during the nationwide Clap for Carers, to support NHS workers fighting the coronavirus pandemic.
Photo by Aaron Chown/PA Images via Getty Images

King's College Hospital in London opened a new critical care unit for coronavirus patients at the height of the pandemic crisis even though officials knew the building had fire-risk issues identified in the wake of the Grenfell tower disaster, hospital officials told Insider.

Patients were treated in the 60-bed unit from March until July even though the building needed "remedial work" to make it safe from Grenfell-type fire risks, hospital sources told Insider.

The unit was shuttered in late July following inquiries by Insider. The hospital denies Insider's reporting prompted its closure.

King's is one of at least seven NHS hospitals in the UK that are operating despite warnings that they have been constructed with materials and methods similar or related to those that turned Grenfell tower into an inferno in 2017, killing 72.

One hospital, in Lewisham, caught fire on July 26 this year. Forty people were evacuated in that fire and the blaze was contained within an hour. It is not clear whether Lewisham Hospital is among the seven hospitals with outstanding Grenfell issues.

Fire is a serious risk in hospitals with Covid patients, because critical and intensive care units use large amounts of bottled and piped oxygen in their treatment. Serious Covid patients are put into induced comas to receive oxygen from ventilators and are therefore immobilized and unable to run in a fire.

Since May 2020, at least 15 patients and hospital staff in Covid units have died in hospital fires around the world. Eight Covid patients died in a fire in a hospital in India just a week ago.

On August 17, Lewisham MP Vicky Foxcroft wrote to Prime Minister Boris Johnson calling for clarity on hospital fire safety. A case worker for the opposition MP told Insider in an email: "I am sorry to hear that unsafe cladding on hospitals may be impacting the services available. Vicky has today written to the Prime Minister and asked for clarity on the situation."

Foxcroft's office did not respond to a request to share the letter itself.

King's was first made aware of Grenfell issues in 2018

King's hospital was first made aware of fire safety issues in November 2018, when it said in a statement on its website that it had appointed building contractor McLaughlin and Harvey to resolve the problems.

"King's College Hospital NHS Foundation Trust's Critical Care Centre has been delayed," the hospital said in the statement at the time. "Inspection works undertaken by the Trust's technical team as part of the final commissioning process revealed issues with defective fire management within the unit. The safety of patients, visitors and staff is paramount. Before the unit can be opened, significant remedial work is required." The work was expected to take only four weeks, King's said at the time.

On March 23, 2020, the prime minister placed Britain in lockdown, and King's made a decision to use the critical care unit beginning in April, even though fire-safety construction was not completed.

"In March 2020, remedial work was suspended when the COVID-19 pandemic was declared," a spokesman told Insider in an email. "We had completed a significant amount of the remedial work and with the support of technical experts put in place a series of mitigations that enabled us to open the unit."

He said that "the remedial work on the CCU is ongoing."

Since April, Insider had asked multiple government ministries about Grenfell fire risks at various NHS hospitals. Our story was published on July 23.

The hospital said the closure was triggered by a prescheduled inspection. "The decision to carry out the inspections was already scheduled as part of the programme of remedial work that was planned to restart once the Trust's response to COVID-19 had decreased and any Government restrictions in terms of building work were lifted," the King's official said.

The incident was "stood down" on July 24. "The Trust continues to have qualified fire wardens in situ in the Critical Care Centre," he said.

Fighting Covid was a higher priority than fire safety

Workers at King's have mixed feelings about the decision to open the unit. "A clear decision had been made by the team running the Covid situation that the new unit should be made operational for the crisis as a priority over the safety concern," one source with knowledge of the matter told Insider.

But another said, "I am fully supportive of how King's handled the situation of opening the CCU during the pandemic and am aware they did so under full advice, guidance, and supervision from London Fire Brigade. I have seen a few press releases on the situation in the news over the last month and don't believe they convey the high-level decision making that went into opening the CCU, which allowed Kings to flex its critical care capacity to allow expert care to be delivered to COVID patients and inevitably saved many, many lives. The comments from the public under these publications demonstrate this lack of understanding and I believe damage the hard work that all staff at all levels achieved during the peak of the pandemic."

The government will not name the fire-risk hospitals

After the Grenfell Tower fire, King's and other NHS Trusts carried out an inspection of all its buildings. In June 2017, the NHS identified 38 hospitals that had "similar cladding to Grenfell Tower."

The National Audit Office said in a June 2020 report that six hospitals had still not removed dangerous cladding as of April 2020. Two of them had no remediation plan in place at the time. King's was not on that list.

The Ministry of Housing, which is required to report on cladding remediation in public buildings to the national auditor, declined to disclose the six names of the at-risk hospitals. "Providing the names of these buildings and their corresponding remediation plans could enable someone to identify particular buildings which have failed or are inferred to have failed cladding tests. There are concerns that this information could be used by those with malicious intent to attack," it said in an August 18 response to a Freedom of Information request submitted by Insider.

At King's, a spokesman confirmed that the building had problems with the fire-stopping structure located in the space between the building and its cladding, which is necessary to contain a fire.

The spokesman said: "The inspection that is currently ongoing has identified potential issues relating to the full efficacy of the intended fire stopping between the external panels and the internal walls. Our inspection involves removing panels in a planned manner in order to examine the fire stopping behind so that we can work out the full extent of the remedial works required."

"In 2017, the Trust went through an overall NHS process to identify and risk assess Aluminium Composite Material (ACM) cladding. ACM cladding was identified on another part of the King's Denmark Hill site and was removed. With regard to the new Critical Care Unit, an independent expert inspected the panels and confirmed that these were not ACM cladding," the spokesman said.

King's also used a type of foam insulation in its building that was banned after the Grenfell fire, the hospital confirmed to Insider. He did not elaborate further.

Kingspan, a manufacturer, provided polyisocyanurate (PIR) foam insulation for the King's unit, a spokesperson for the company confirmed. PIR foam was banned in residential buildings above 18 metres in height following the Grenfell disaster.