North Korea on Monday recalled the days of "fire and fury" by releasing images of leader Kim Jong Un touring a suspected nuclear-capable submarine, and a close reading of the images reveal once again that a US fight with North Korea could mean death for millions in the region, and suicide for Pyongyang, the country's capital.

Kim hasn't been pictured inspecting weapons capable of carrying nuclear warheads since the thaw in tensions between Washington and Pyongyang, but on Monday, it appears to have lost its patience with now stalled peace talks.

North Korea has long sought a submarine that can fire ballistic missiles but struggled to create one while under international sanctions. Ballistic-missile submarines give countries like the US and Russia an incomparable deterrent.

Even if an adversary state somehow found every single nuclear weapon a country possesses and destroyed them before a single shot could be fired in return, a submarine could lurk under the surface to deal a final retaliation blow.

The pictures on Monday suggest that Kim is getting close to changing that, although the submarine's crude construction will likely compel it to lurk close to North Korea's shores and out of range of more powerful US subs.

Take a look at Kim's tour of the submarine factory in the pictures below. This shot shows the rough finish of the submarine and the several panels in the construction. It's unclear if these panels conceal anything useful or are simply shoddy work.
KCNA This shot gives context to the submarine's size. It's estimated at 11 meters across.
KCNA Bryan Clark, a senior fellow at the Center for Strategic Budgetary Assessments and a former submariner, told Business Insider that Kim's "new" submarine looks much like a Russian Romeo-class submarine, which was first built in the 1950s.

"It seems like they've adapted a Type 033, the only submarine they had access to, and adapted it to carry ballistic missiles in a conning tower sail launch tube," he said.

Clark said the US and other advanced countries build submarines with giant round plates of steal that they weld together; North Korea had to weld together small flat sheets of steel. This, according to Clark, gives the submarine its rough appearance and many seams along the edges.

In the world of submarines, this rough surface kills the vessel's ability to hide underwater. 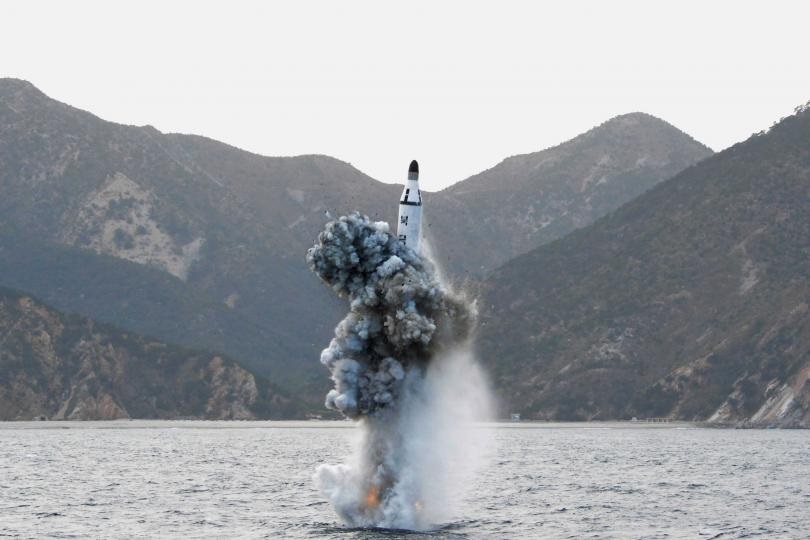 Instead of patrolling the world's oceans like the US and Russian nuclear submarines do, Clark said this submarine probably wouldn't leave North Korea's coast. Most likely, it would sit a few kilometres off the coast within North Korea's territorial waters and be armed with a few nuclear missiles.

US and Japanese ships have excellent sonars that can easily find and help destroy submarines like North Korea's shoddy diesel-electric boat, but international law would keep them at least 10 or so miles at bay - unless a war was on.

"If you deploy it in your home waters off your coast, you can maybe avoid someone getting close enough to attack it," Clark said. "That gives you like a 10-mile buffer. [The US or Japan would be] able to hear it right at that buffer."

This means North Korea's submarine can essentially perform one task: launching nuclear missiles at close targets like South Korea or Japan. This is a suicide mission for Pyongyang.

A submarine launch by North Korea would mean an almost unstoppable shot. All of a sudden, a missile would emerge from the depths and then jet upward to the edge of space. Within a few minutes, that missile could come crashing down on one of the world's more densely populated cities. It would leave a trail to a pinpoint in the ocean where the submarine had lurked.

But while the shot is unstoppable, the submarine is unsurvivable. US and Japanese ships, after a nuclear attack, would breach North Korea's waters and hunt and kill the ship. Targets on land in North Korea would likely follow next, as the US brought it vastly superior nuclear forces to bear.

This makes it extremely unlikely North Korea would ever use this submarine for nuclear strikes. Even with that knowledge, Clark said he wouldn't want to submerge in North Korea's new submarine. Clark compared the old technology to taking a '67 Chevy and trying to drive it cross country without an oil change or engine checkup.

One way or another, North Korea's new submarine looks like a death trap.