KFC South Africa on Wednesday announced it was taking orders via WhatsApp, in what it claims to be a first for quick-service restaurants in South Africa.

The KFC chatbot is standing by, on the number 087 153 1074, where it is "[c]onnecting with, and catering to, the youth market" that may find data expensive, the chain said in a statement.

The offers on the WhatsApp channel are identical to those on the KFC ordering website, a review by Business Insider South Africa found, down to savings of up to 25% on some bundles. Those offers are now available to people on WhatsApp package bundles who may not be able to use the website or, as KFC puts it, simply want to order using the same platform on which they are discussing dinner with friends.

But it is more annoying than ordering on the website.

Though the chatbot claims to be able to accept payment via the WhatsApp channel, that function is not yet turned on. The system is for click-and-collect only, with no delivery option in sight. Slight response delays – and headline specials that are not available – also make the WhatsApp ordering system a pain to use.

Here's what we found when we tried to order KFC via WhatsApp.

The specials really are as good as advertised, worth up to 25% On Wednesday there were two headline offers on the WhatsApp channel, pushed via enticing images while the rest of the menu was in text only: a Streetwise 5 meal for R70, and a four-Colonel Burger combo for R119.70. That is an 18% saving on the Streetwise meal, and a genuinely free burger on the Colonel combo (an effective 25% saving) compared to what you'd pay in store.

Those are also the "online exclusive" prices available if you buy directly on the KFC website.

There's no chat in this 'chat commerce'; you'll be punching in numbers 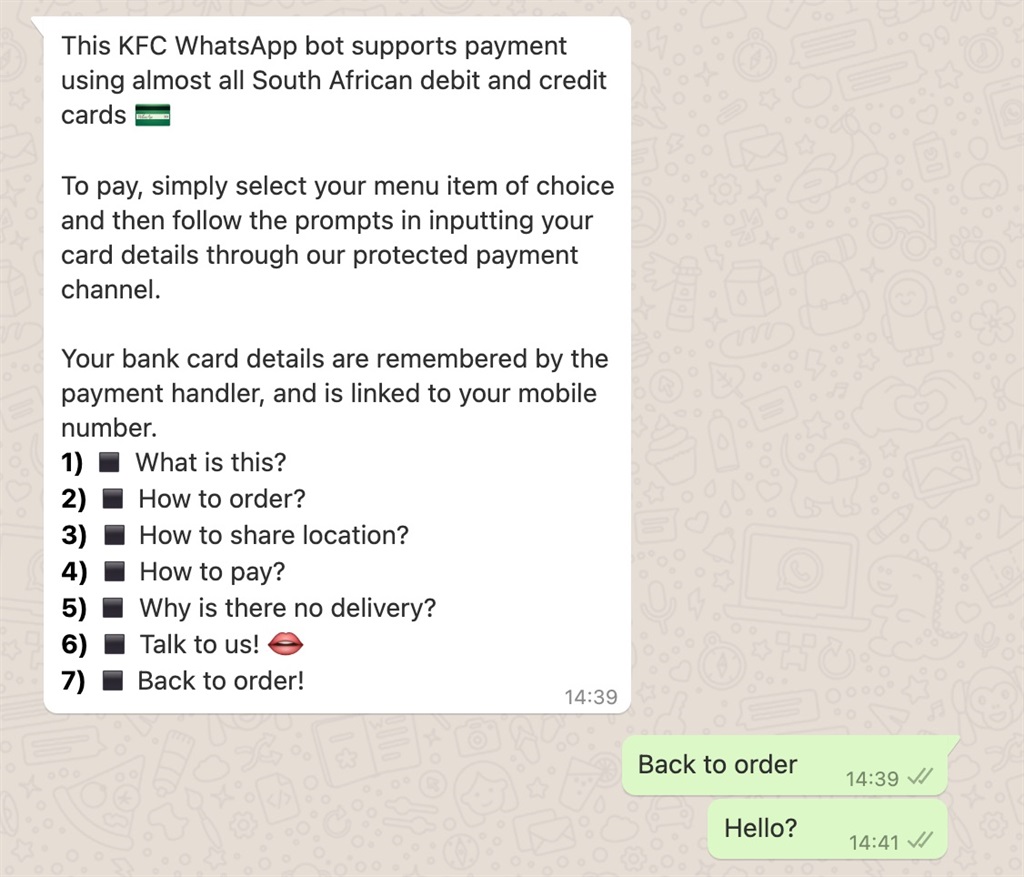 KFC says its system "leverages natural language processing", which suggests you can talk to it as you would to a human.

This is not the case.

If you want to order efficiently, you'll find yourself punching in the numbers assigned to menu options, which sometimes means scrolling back up the screen to hunt out the right digits.

It is a little annoying when you have to confirm your location for no obvious reason... ... but not nearly as annoying as when the special you are trying to order is not available at your local KFC We could not secure the Streetwise 5 special – a simple combination of KFCs two mainstays, fried chicken pieces and chips – at the KFC restaurants close to the Business Insider South Africa offices in either Cape Town or Johannesburg.

Once your order fails because it is, somehow, not available, you have to start from scratch and risk having the same thing happen again; there is no menu of what is available at your chosen location.

If your chosen order is available, you are asked to consent to marketing messages When you successfully secure your meal, you get a sudden burst of emoticons As of Wednesday, the KFC website listed 39 stores from which WhatsApp ordering was not possible: