KFC has quietly rolled out a new "Masala Crunch" flavour of chicken to its stores, even before launching a minimal marketing campaign this week.

On Tuesday the fried chicken chain updated the cover picture of its South African Facebook page to an announcement, after publishing a video ad on Monday with little fanfare. But stores visited by Business Insider South Africa said they were already seeing strong demand based on drive-thru posters and menu-board ads – and staff said customers who tried it tended to come back for more.

Our own testing also suggested that KFC had a hit on its hands, with none of the controversy its recent flavour experiments – such as the Dunked range – have attracted.

See also: We compared KFC’s new Dunked burger to its Zinger and Crunch cousins – and we’re not loving the ‘covered in motor oil’ thing

Our tasters overwhelmingly said they liked the spicy new version of KFC – and that they would order it over the famous Original Recipe on which KFC has built an empire.

That includes people who claim hot and spicy food are not their thing.

Here's what the KFC Masala Crunch flavour of chicken is like.

You can see, and smell, the difference straight away. There is no mistaking Masala Crunch for Original Recipe. The spicy newcomer has a very obvious orange-yellow tinge to it, and looks a great deal more appetising than the more dirty-brown standard KFC flavour.

The masala version also has a smell vaguely reminiscent of curry, much stronger than the typical (already pretty pungent) smell of KFC.

The 'crunch' part of the name is accurate, but 'masala' is a bit of an overstatement. Our testing panel were unanimous: the name Masala Crunch is a half accurate. The new KFC is undoubtedly crunchy, much more so than the regular flavour, but none of our team would have guessed "masala" as the flavour.

The masala version is sweet and fruity – and if we had to guess, we would have described it as the fruity chutney version of KFC Sprinkle Pops, with a fair amount of heat added.

One tester said it tasted like a "Moroccan rub", others described it as somewhat "East Asian" for its tang.

The spicy part comes as an aftertaste, building up as you eat. Our recommendation is to eat two or more pieces if you like hot food, and to stick to just one piece if spiciness isn't your thing.

The flavour is skin-deep, but exciting compared to regular KFC. 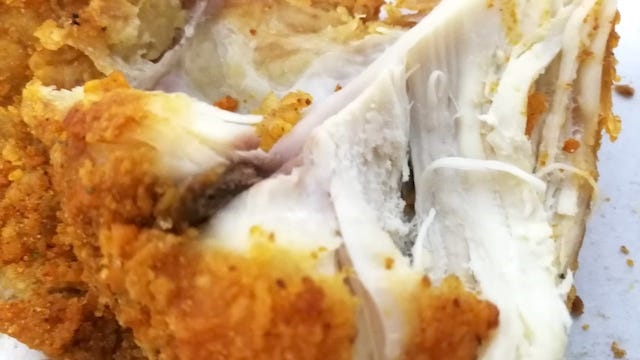 The Masala Crunch flavour seems like something layered over normal KFC after the fact, one tester remarked. And indeed we found that peeling the coating off the new-style KFC makes the actual chicken indistinguishable from the original, which may just come in handy for those who don't find the spicy version pleasant.

We had no such fussy eaters in our test. Just about everyone said they would rather order Masala Crunch chicken pieces than plain – and boring – old KFC. The level of spiciness was just right to make Masala Crunch exciting, but not overwhelming or off-putting.

Remarkably for a new flavour from an old favourite brand, we had no complaints about KFC Masala Crunch. Both aficionados of the brand and those who normally prefer the likes of Nando's or Chicken Licken were positive about the new flavour, and most said they preferred it over the original.

In fact, at least some of our tasters are likely to be disappointed if KFC removes the spicy version from its menu again, because they now consider plain-old KFC to be bland.

Here is how KFC is advertising its new Masala Crunch flavour option.