We tried KFC’s 50th birthday menu, and the Doughnut Zinger Burger was the star of the show In celebration of its 50th birthday, KFC South Africa has opened its first ever pop-up store, Kentucky Town, and has introduced new and returning menu items that fans may never see again – and we tried them all out.

For 11 days only – 25th of November until the 5th of December 2021 – KFC South Africa has, in their pop-up store at The Zone in Rosebank, made available a limited-edition 50th Birthday menu.

The menu includes items that fans once got a taste of in the past and new things they may never get to taste in South Africa again. 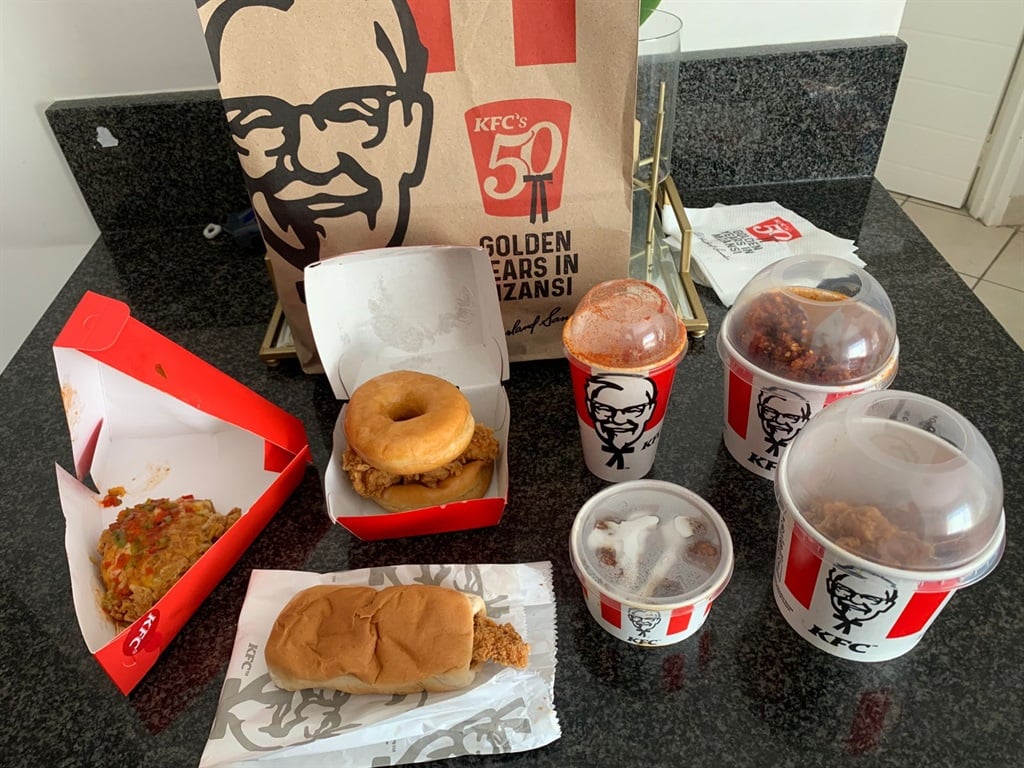 The menu also includes a return of items from the past such as the KFC Streetwise Chow and Spicy Chips.

Customers also have the option to buy a bottle of 'Zinger Sauce' and 'Dunked Sauce', for the first time ever. In addition to tickling their taste buds, customers can engage in several Never-Before-Never-Again experiences at the pop-up store.

Some of these experiences include blending their own 11 herbs and Spices to create a secret family recipe, personalising their own 'Colonel Yourself' t-shirts, taking selfies in a giant KFC bucket, and buying limited edition merchandise, among other things. 11 herbs and spices to choose from (Business Insider/ Phumi Ramalepe) We visited the popup store and tried the menu, here's what we think

The new KFC Chizza slice is made of a single chicken fillet topped with cheese, tomato sauce, and some red and green peppers. The crunchy chicken fillet is quite spicy, and when combined with the other ingredient, it definitely gives it a pizza taste.

"The cheese that melts and stretches when you bite into it, good. The pepper, good. The packaging, perfect!

"I mean, who doesn't want pizza on chicken?" said two tasters who both enjoyed the Chizza Slice.

Our other taster also thought the menu item was nothing short of perfect. However, he thinks the pepper and tomato sauce topping tastes like gravy which he could easily make at home – he was amazed by the cheese.

"The cheese makes it amazing and keeps everything well put together. That's one thing I wouldn't have thought of adding at home."

The Doughnut Zinger Burger is just that, two doughnuts with a crunchy chicken fillet in between, plus glazing on top. The combination looks unthinkable, but surprisingly, it tastes amazing! Even our tasters agree.

"This is fantastic, It's amazing. I love it," said one sold taster. "It literally tastes as good as it looks. I would buy it again today, and if it comes back I'd buy it again. It's delicious."

Another taster was mind blown by the choice of ingredients, saying its very unusual to find something like this in South Africa.

"In South Africa, chicken is chicken. It's not something people would want to mix with doughnuts, but at first bite, it tastes surprisingly delicious. The zinger taste really stands out," he said.

Our other curious yet sceptical tasters were also sold, somewhat.

One taster described it as "very peculiar." She went on to say "my taste buds are definitely not used to this, but I think if I tried it a second time I'd probably get used to it and want more," she said.

Another taster wasn't entirely convinced. "If it came back, I wouldn't be mad, but it's not something I would have every day. But it's something I'd definitely buy again," she said. We found this offering quite strange, but some tasters loved the snack.

"The skin pieces are okay. I like the crispiness. They taste like when you bite into the chicken but there's just no meat," said a taster.

Although she enjoyed it, she thinks it would be much better if the snack came in a variety of flavours.

The Southern Sunrise is a refreshing drink that has a nice fizzy citrusy taste to it. While some of our tasters found it deliciously refreshing, others thought it tasted just like what KFC already offers. "I think the drink is okay. It tastes like the mojito they already have, only they added Oros," joked one taster.

Variety would be much appreciated when it comes to this item. "I feel like if they had it in pineapple flavour, that'd be great," she said.

The Streetwise chow consists of the KFC mini loaf stuffed with the popular KFC gravy and a deep-fried chicken strip. The piece of chicken that was outside of the mini loaf looked a little too dry, and so was the mini loaf itself by the time we ate it.

The inside, however, was juicy and fresh thanks to the gravy. One of our tasters, who seemed to be a fan thought "it's a good meal for people on the go.

"It could've been better with a bit more gravy and some mashed potato… and a little more salt," he said.

Zinger Chicken with your choice of Original Dunked Sauce

The zinger chicken is no stranger to KFC. We got the super-hot version and it was everything we expected and more. In the words of one of our tasters, "it is off the chain."

"It's the best thing to order at around four in the morning with the gents," He said. "The spiciness probably won't be good for my tummy but it is definitely worth it," he said.

Another taster agreed and said the extra spicy chicken would probably be a good cure for a hangover too.

Out of 10, we'd give it an eight, simply because we wish it came in other bigger sizes and was served with a fork and knife to avoid the messiness we encountered when trying to break it into pieces.

Some of our tasters thought customers should have the option to choose if they want it spicy or not.

Out of 10, this gets a nine and a half, because nothing is perfect. Apart from adding more glazing, our taster said they wouldn't change anything else about it. They'd like KFC to bring it back in South Africa.

This one gets a 6.5. it's not bad. Customers just need a variety of flavours, but they taste good with the dunked sauce.

The drink gets a seven for freshness and taste. They need to introduce flavours they've never had before to avoid repetition.

Out of 10, this one gets a 5.5. It has all the flavours you'd expect from a KFC meal but it tends to dry up quickly.

With a bit more salt and mashed potato to complement the gravy, the whole thing would be fire.

This one deserves an 8.5. The spiciness gave what it was supposed to give and the chicken was crunchy yet soft and fresh on the inside.