Kenya is being menaced by swarms of billions of locusts, and only has 5 small planes spraying pesticide to fight back 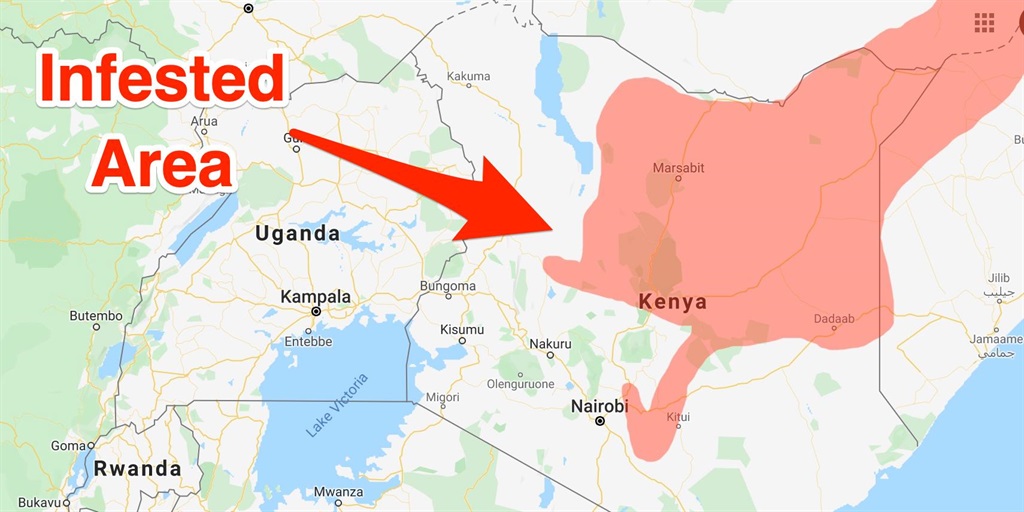 The situation is almost biblical: swarms of locust are plaguing parts of East Africa. Each swarm, local authorities told the Associated Press, can have as a many as 150 million locust.

Now, the United Nations is calling for $76 million (R1bn) to combat the insects. In Kenya there only 5 light aircrafts being used to spray pesticide to fight the infestation, the Associated Press reported.

Kenya is currently engulfed with billions of finger-length locusts, which made their way from neighboring Somalia and Ethiopia and there's worry they could spread to Uganda and South Sudan.

"One especially large swarm in northeastern Kenya measured 60 kilometers long by 40 kilometers wide," according to the AP.

This is the worst outbreak Kenya has seen in the past 70 years, and according to the BBC, these are the largest swarms to hit Somalia and Ethiopia in the last 25 years.

Somalia has already declared a national emergency over concerns that the insects, which eat plants may not go away before the country's harvesting season in April. The infestation could cause a hunger crisis for millions of people.

Only $15 million has been used so far to stop the infestation, Dominique Bourgeon, emergencies director with the UN Food and Agriculture Organisation told the AP.

This outbreak is in part due to changing climate, specifically "unusually heavy rain over the past few months," according to the AP. The locust can't survive as a well in drier conditions, which are not expected to start till June.

The heavy rain, which is increasing fresh vegetation is also creating the perfect environment for the locust to reproduce. Salat Tutana, the chief agriculture officer in Isiolo county in Kenya told the AP, that despite killing several swarms, new ones pop up on a weekly basis. Local authorities also told the AP that they need more assistance because it is still unclear how large the issue could get.

The BBC reported that in a day the insect can eat its weight in food and travel up to 150km.

Earlier this month, an Ethiopian Airlines flight from Djoubti to Dira Dawa was forced to land in Addis Abba after 30 minutes in the air when a swarm of locust blocked the pilots view and "slammed into the plane's engine, windshield and nose," the BBC reported.

The United Nations Food and Agricultural Organisation said the issue in Kenya could become worse and spread to the northern and central areas. They also warned "breeding will cause a further increase in locusts in number with hatching and band formations during February and March."

For some farmers in Ethiopia, the swarms have already destroyed as much as 90 percent of their crops, the AP reported. Swarms can destroy an entire pasture within hours.