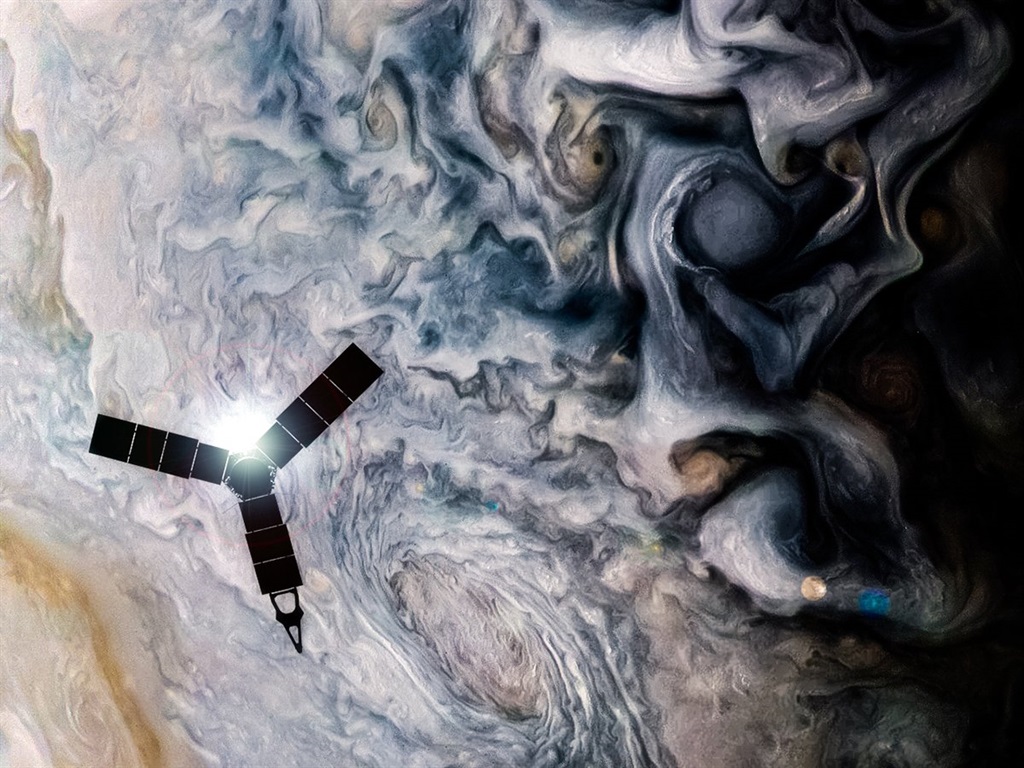 NASA/JPL-Caltech/SwRI/MSSS/Kevin Gill
All good things must come to a end, and Juno — NASA's $1-billion (about R12.3 billion) mission to study Jupiter like never before — is no exception.

The probe launched from Earth in August 2011, reached Jupiter in July 2016, and is scheduled to make its last two of 14 high-speed flybys around the gas giant in May and July.

But that doesn't mean Juno is finished beaming back astounding new photos of Jupiter. At least not yet.

For months, NASA and Juno mission managers have discussed a "continuation mission" to extend the probe's time at Jupiter and unravel even more of the planet's super-size mysteries. Scientists are hungry for more data, especially since Juno got a sticky engine valve when it arrived — a glitch that dramatically slowed the pace of its discoveries.

"I think for sure the continuation mission will go on," Glenn Orton, a lead Juno mission team member and planetary scientist at NASA JPL, told Business Insider. NASA has yet to approve funding, though, so he added: "I'm hopeful but nervous."Should NASA decline an extension, the probe will plunge into Jupiter this summer. "Stay tuned," a space agency representative told Business Insider in an email, adding that more information about the mission will come in May.With Juno's first (and just maybe last) mission at Jupiter ending in July, we've rounded up some of the probe's most jaw-dropping photos, data imaging, and animations.

Jupiter is the largest planet in the solar system — so massive, in fact, that it doesn't technically orbit the sun. The world is about 318 times as massive and 1,321 times as voluminous as Earth. Few spacecraft have ever visited it. The spacecraft soon began high-speed flybys of Jupiter, called perijoves. During each perijove, Juno takes astounding image sequences while it zooms over the north pole... "Jupiter is in constant flux so it's always a surprise to see what is going on in those cloudscapes," Seán Doran, a graphic artist and a prolific processor of JunoCam images, previously told Business Insider. Some users boost the saturation and contrast to pull out exquisite details of cloud bands.

But Jupiter's gargantuan Jovian storms and the wild patterns they leave in the clouds stand out with little help. Photos of the Great Red Spot have been a favourite among Juno fans. The storm could easily swallow Earth, and the probe photographed it twice — once in July 2017 and again in April 2018.

Lesser-known storm cells, many of which don't have evocative names because they're so short-lived, also swirl about Jupiter. 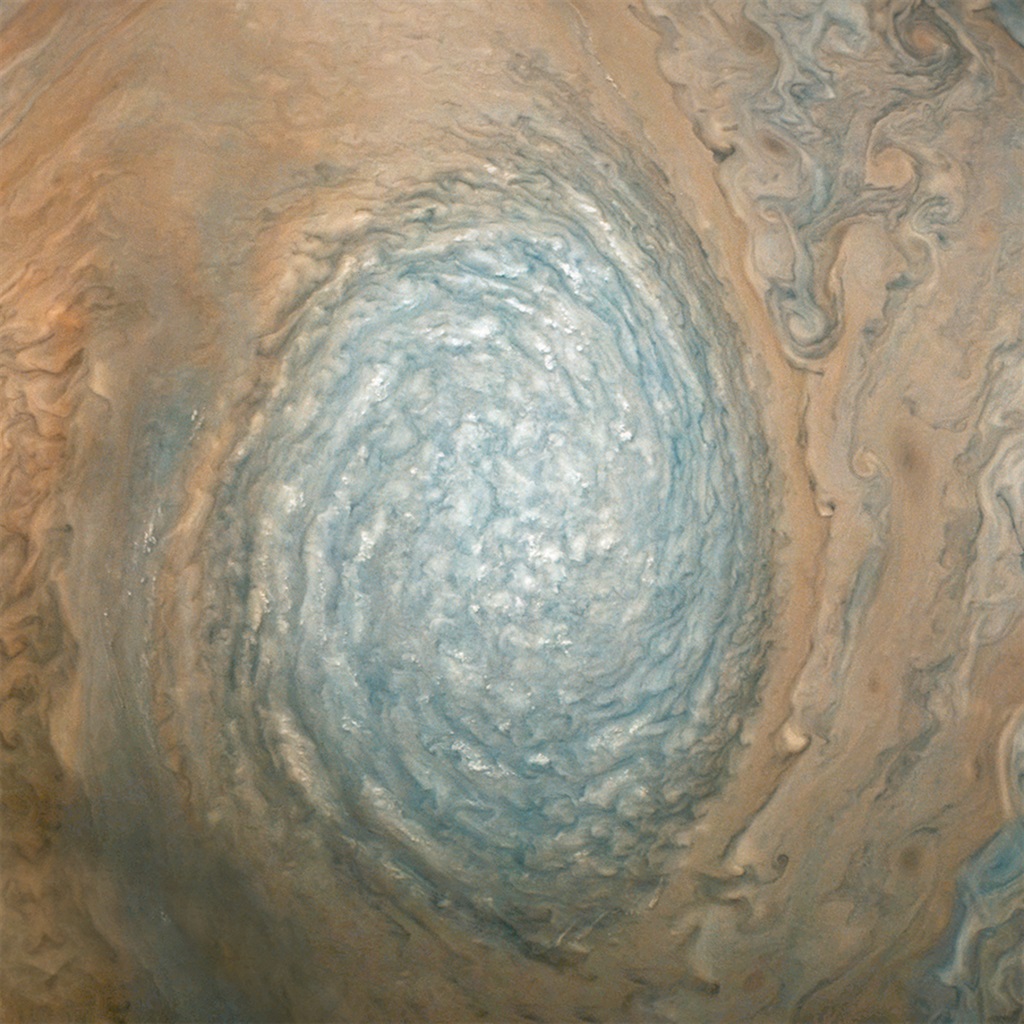 Many storms in Jupiter form bands and patterns that are as hallucinogenic as they are beautiful. Some bands leak into others, forming chaotic eddies. 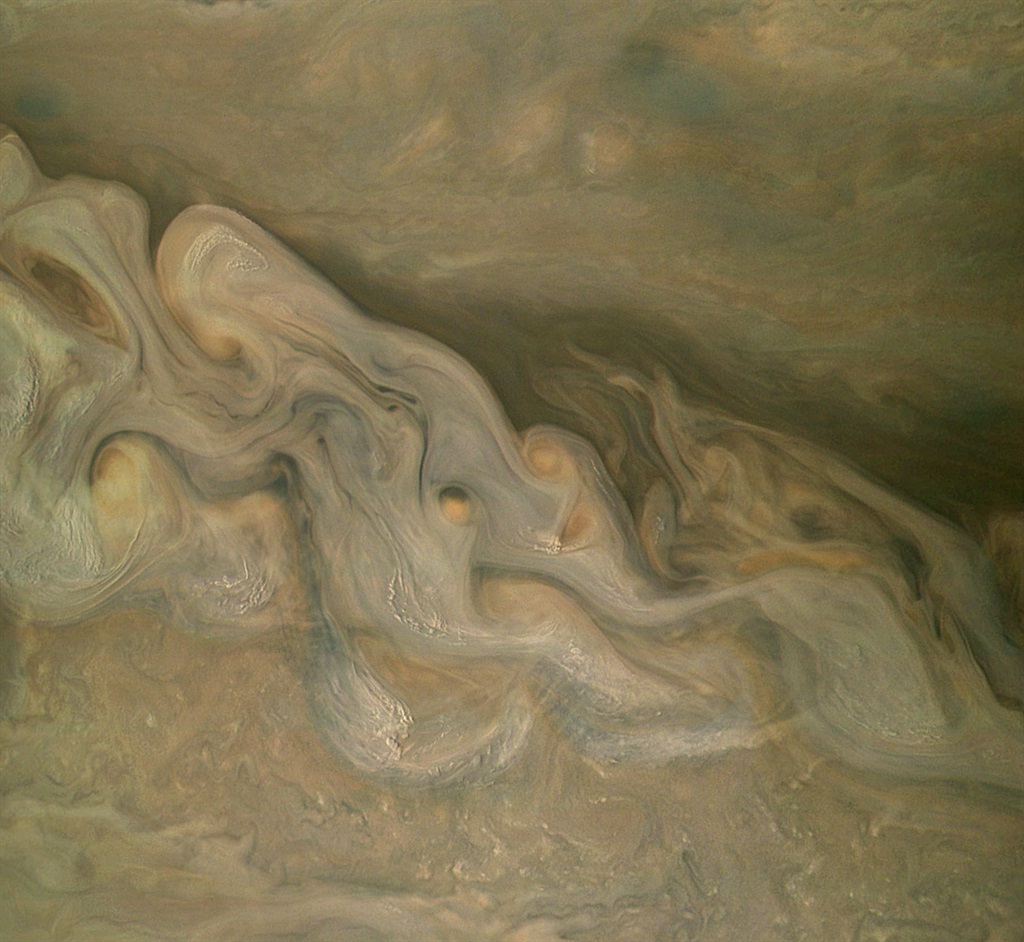 Other bands create powerful chevrons that punch through cloud layers. The storm at the center of this image is many times larger than a hurricane on Earth. NASA described this image showing a mess of storms as a "mind-bending, colour-enhanced view of the planet’s tumultuous atmosphere" in a January 2018 release. Jupiter's collections of storms grow more chaotic toward each of its poles. The poles are regions that planetary scientists had only dreamed of seeing until a few years ago, thanks to Juno's daredevil orbits. This oddly symmetrical image of Jupiter's north pole was made using a combination of photos from Juno's first, third, fourth, and fifth perijoves. It also uses images from the probe's aurora-mapping instrument, called JIRAM. JIRAM scans Jupiter for temperature variations and electrical activity that are invisible to JunoCam.

Researchers have used the data to model the planet's storm-choked north pole in 3D. Juno has completed 12 of the 14 total orbits scheduled for its first mission — the final two will happen on May 24 and July 16. But even with an extension and a new mission, the probe won't last forever. 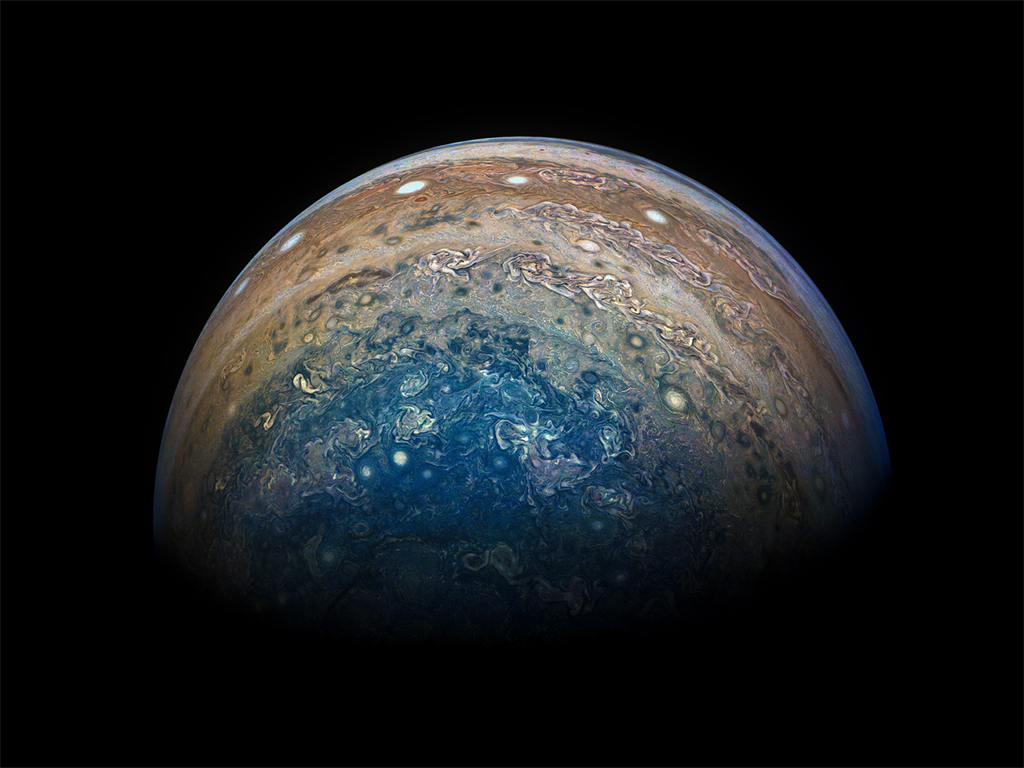 Half of Jupiter's icy moon Europa as seen via images taken by NASA's Galileo spacecraft in the late 1990s.
NASA/JPL-Caltech/SwRI/MSSS/Gerald Eichstadt/Sean Doran

NASA will eventually plunge Juno into the clouds of Jupiter to destroy it, thereby eliminating the possibility that it could crash into one of the planet's icy, ocean-hiding moons. An illustration of a submersible robot exploring the subsurface ocean of an icy moon.
NASA/JPL-Caltech/SETI Institute

It's important to avoid contaminating the subsurface oceans of Europa, Ganymede, and the other moons with bacteria from Earth — as well as any alien life that may exist beneath the ice. An illustration of NASA's Juno spacecraft flying above the clouds of Jupiter.
NASA/JPL-Caltech