Our solar system's giant planet has been hiding something — or 12 things, really.

Researchers announced on Monday that they'd discovered a dozen new moons around Jupiter, including a tiny one that they're calling an "oddball". Because of that small moon's orbit, it may be eventually be destined for an crash.

The finding brings the total number of known Jovian moons to a whopping 79.

But what's particularly wild about these newly discovered moons is that researchers weren't even looking for them.

The team that discovered the moons was searching for a hypothetical massive planet that might exist at the far fringes of our solar system, often referred to as Planet Nine or Planet X. The work was led by Scott Sheppard, a researcher at the Carnegie Institution for Science who studies small bodies in the solar system and the formation of planets and stars.

But the researchers realised that Jupiter happened to be in a spot that allowed them to examine the area around the gas giant for any unknown natural satellites.

"Jupiter just happened to be in the sky near the search fields where we were looking for extremely distant Solar System objects, so we were serendipitously able to look for new moons around Jupiter while at the same time looking for planets at the fringes of our Solar System," Sheppard said in a statement. The Carnegie Institution for Science

The many moons of Jupiter

The team was using the Blanco 4-metre telescope at Cerro Tololo Inter-American Observatory in Chile, which recently got upgraded with the Dark Energy Camera. That makes it a powerful tool for surveying the night sky in search of faint objects.

They first spotted the 12 new moons in the spring of 2017, but they had to conduct several more observations before they could confirm that the moons actually orbited Jupiter, according to Gareth Williams of the International Astronomical Union's Minor Planet Centre.

"So, the whole process took a year," Williams, who calculated the orbits of the new moons, said in a statement.

With 67 other known moons flying around Jupiter, there's already a good amount of traffic around the gas planet, as shown in the illustration above.

Jupiter's largest moon, Ganymede, is the ninth-largest object in the solar system, bigger than the planet Mercury and dwarf planets like Pluto. But the newly discovered moons are tiny, ranging from 1 to 3 kilometres in diameter.

Two of the new moons are part of the prograde group, a bunch of moons that are relatively close to Jupiter and rotate in the same direction as the planet. Astronomers think these moons may have originally been part of one larger moon that broke apart, according to the Carnegie statement. 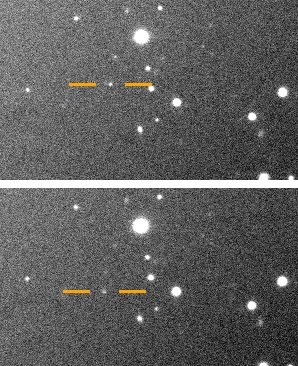 Valetudo can be seen moving relative to a steady background of distant stars in this image.
The Carnegie Institution for Science

Nine of the new moons are in the retrograde group, a distant bunch of moons that rotate in the opposite direction of Juipter. This swarm may have originally been three separate moons that broke apart after collisions.

Then there's the oddball

The team proposed naming that tiny moon Valetudo, after the goddess of health and hygiene. In mythology, she was the great-granddaughter of the Roman god Jupiter.

The moon travels in the same direction as the prograde moons, but is located as far from Jupiter as the retrograde moons that travel in the opposite direction. That means a head-on collision could occur.

"Our other discovery is a real oddball and has an orbit like no other known Jovian moon," Sheppard said.

Valetudo might be the last fragment of a larger moon that was destroyed by the retrograde moons, and its path means it too might eventually get demolished.

"This is an unstable situation," Sheppard said.

Related Links
NASA's Jupiter probe just beamed back even more jaw-dropping photos of the planet's tireless...
Astronauts explain why nobody has visited the moon in more than 45 years — and the reasons are...
Buzz Aldrin, who walked on the moon, wants the lunar surface to become a launch pad for Mars —...
Next on Business Insider
New Yorkers need R23 million to feel 'financially comfortable’, survey says