Black Monday on South African markets: It’s a bloodbath out there

By early afternoon on Monday, the JSE's index of its 40 biggest shares had plummeted by more than 4% - well on its way to suffering its biggest daily loss since December 2008.

Currently the largest decline was on 24 June 2016, when the index gave up 3.97% after the shock result of the Brexit referendum was announced.

Only on 17 days in the past 2 535 trading days has the index declined by more than 3% in a single session, according to a report by Sharenet Investments.

So far this year, it has done it twice.

The index lost more than 3% on the first trading of the year, which turned out to be a clear omen of what was to come.

So far, 2020 has been a tough year for many South African equities, with giants like Sasol losing 35% over the past two months.

Selling of most local stocks took an even bigger turn for the worse on Monday, as a perfect storm of coronavirus concerns and pre-Budget jitters hit the local market.

Investors are nervous about the tax hikes that may be announced in Wednesday’s national Budget, says JC Louw, CEO of Sharenet Investments. There is talk of a capital gains tax increase, once-off tax levies on individuals and companies, and a VAT hike, he adds – all of which will hurt a bleeding economy even further.

Read: South Africans may be hit by a once-off tax this week, Old Mutual warns

Government is desperate for new tax income as state coffers are being drained by constant bailouts of state-owned enterprises like Eskom and SAA. Gross government debt has now reached 61% of the GDP - from only 24% a couple of years ago.

“Investors continue to be worried about a lack of political certainty and whether president Cyril Ramaphosa has a clear grip on power. Talk of a sovereign wealth fund and National Health Insurance – which are not things South Africa can afford right now –, as well as expropriation without compensation has added to the negative sentiment,” Louw said.

Meanwhile, global markets are bleeding as the coronavirus spreads from China, which already has almost 80,000 cases, to Europe. Within two days, Italy’s number of confirmed cases rocketed from three to 150 by Sunday. On Monday morning, European markets all lost more than 3%. Wall Street opened to large losses.

The impact from the coronavirus on global supply chains is now also starting to become clear, with companies increasingly struggling to get supplies from China, as some parts of the country remain on lockdown.

The other big concern is that the coronavirus will change consumer behaviour – permanently, says Louw. “Many people are now staying away from stores and malls for fear of contracting the virus. Instead, they are ordering food and other essentials online, and depending on digital entertainment.”

This may mark a permanent shift to online retail and entertainment, as well as order-in food, which may benefit companies like Naspers-controlled Prosus, which owns stakes in the Tencent and a couple of food delivery services, he predicts.

The coronavirus has also caused a rush into gold, which is seen as safe haven investment. The gold price has jumped 10% so far this year, and is at its highest level in seven years. In rand terms, it's around record highs.

Harmony’s share price rallied 17% on Monday, while Gold Fields was up 8%. But for most local companies, the coronavirus was the last thing they needed.

One of the biggest losers on the market was Sasol which lost almost 9% on Monday as the Brent oil price gave up another 4% to around $55 a barrel amid concerns about the global economy.

Sasol announced its half-year results on Monday morning, which included the news of a 74% drop in interim profit due in part to the continued problems at its US chemical project.

This is slightly above the historical average of 15.7 times – but as recently as 2016, these shares were trading at 24 times. 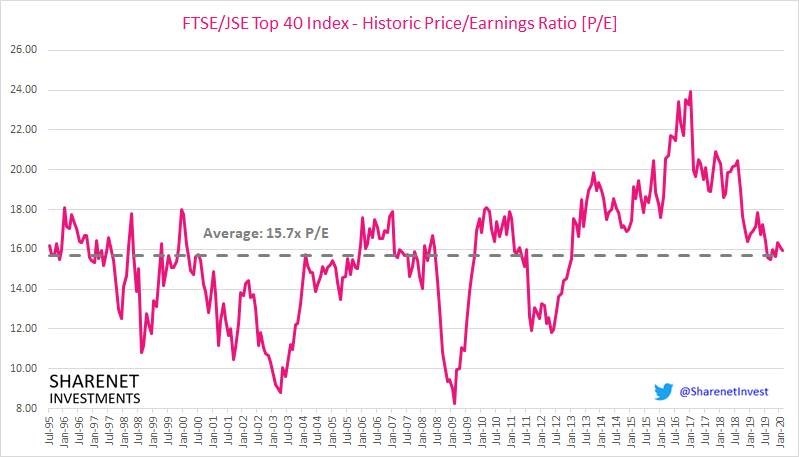