Wall Street’s sharp recovery in the last two trading sessions has done little to assuage investors' concerns that the sudden spurt of market volatility that began just over a week ago is here to stay, with all of the dangers it carries.

For Bob Michele, chief investment officer for fixed income, currencies and commodities at JPMorgan Asset Management, there is one thing that could turn what he sees as a needed market correction into a deeper equity-market funk: A sudden spike in inflation expectations.

"So if you see a sharp rise in prices, whether it’s the core CPI [consumer price index], personal consumption expenditure, or wages, people will immediately look to the central banks and the Fed in particular to accelerate their tightening."

Indeed, a stronger-than-expected 2.9% rise in annualized average hourly earnings in the monthly jobs report released on February 2 was likely a major reason that markets first went into a tailspin.

Many investors now fear that the combination of a tax cut package on top of an already fairly robust underlying economic recovery will unleash the inflation that’s been missing from the US economy for the last several years, forcing the Fed to raise interest rates more quickly than expected.

Already, investors have jumped from pricing in just two more interest rates hikes from the Fed this year to as many as four, possibly more.

Barring an unexpected spike in inflation or expectations thereof, Michele is actually fairly sanguine about the outlook for financial markets.

"We think the global economy is in pretty good shape: Inflation is picking up a bit, and the central banks are going to be gentle in how they normalize because they don’t want to cause a recession," he said. Michele is urging clients to “take advantage of the correction, maybe let it run its course a little longer." (The interview took place on Friday, before the market’s latest rebound.)

"From our perspective, corporate credit looks great. None of us can remember a time when corporate America has had more financial flexibility," he said.

"Since the financial crisis, companies have stripped costs out of their operating model and have been operating a very lean and efficient platform," Michele added. "But now it’s got this enormous tax windfall that’s coming which leaves a considerable amount of after-tax income for companies to spend."

Another driver of the stock market’s slump was a steady rise in Treasury bond yields. But Michele believes ten-year rates, currently trading around a four-year high 2.9%, will not rise much further above a 3% to 3.25% range. 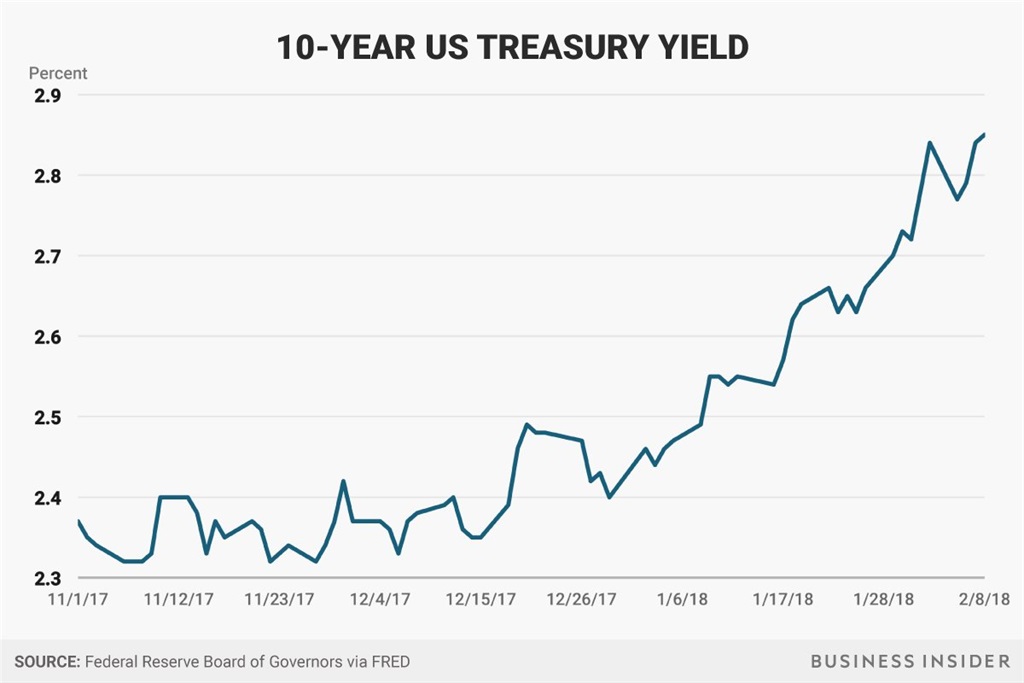 Andy Kiersz/Business Insider
That’s because of his expectations for continued strong corporate earnings, but also a less widely advertised source of demand for risky assets that could hold US yields down — spillover from continued monetary easing in Europe and Japan.

"I think we’re pretty close to topping out on the ten-year for the time being. If we’re right the equity market can absorb all of that with great ease," he said.

“We just see from our position the flow of money coming in from Asia and Europe into the US market,” as US Treasurys continue to offer higher returns compared to their European and Japanese counterparts despite firming overseas growth.

"Those are the kinds of things that will cushion the backup in yields in the US," Michele said.