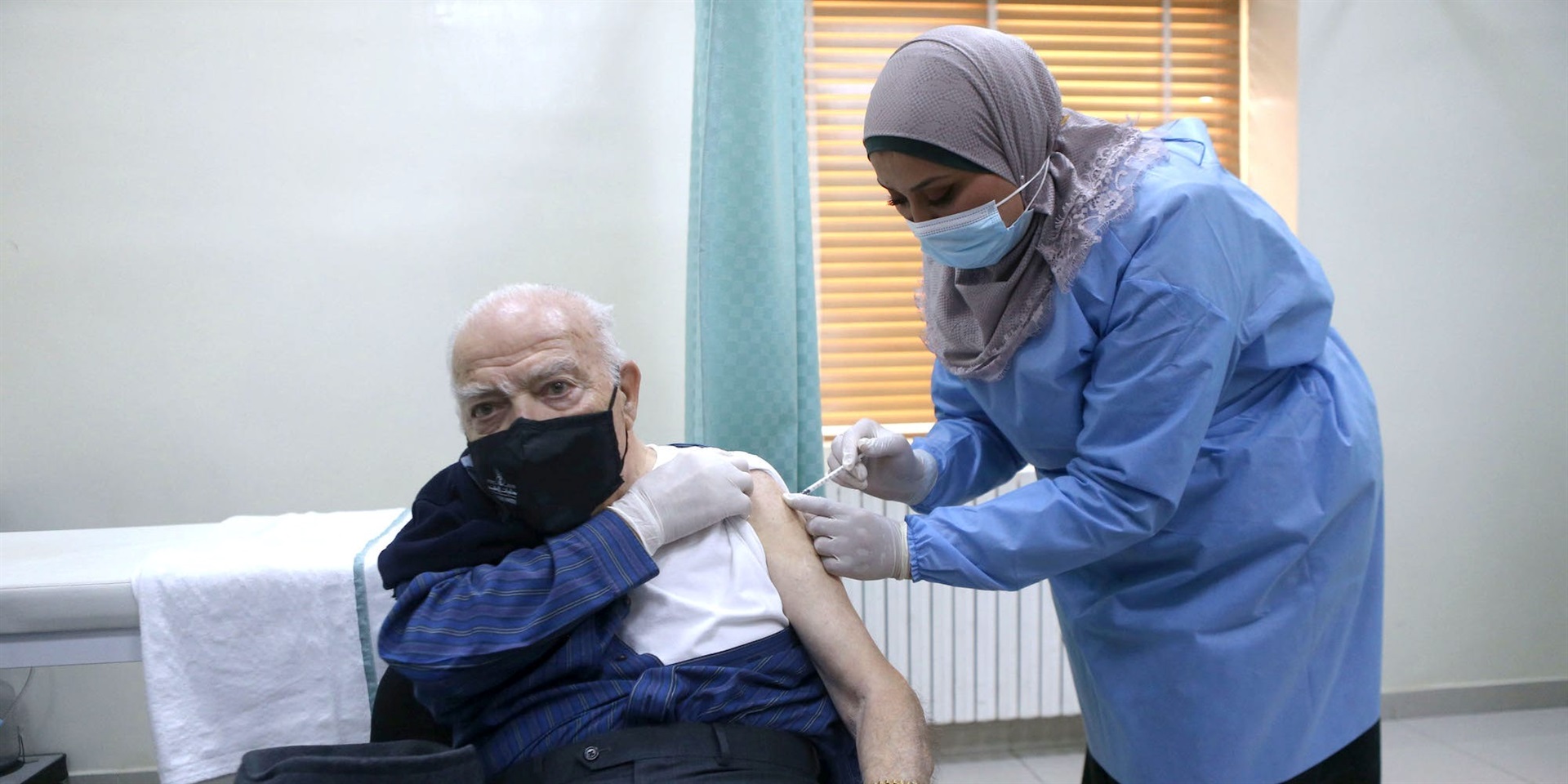 A nurse administers a Covid-19 vaccine to an elderly, as Jordan starts the national vaccination campaign at a special vaccination clinic on January 13, 2021 in Amman, Jordan.
Photo by Jordan Pix/Getty Images

Jordan became one of the first countries to include refugees in their vaccination campaign when it began rollout this week, according to the UN Refugee Agency.

"Refugees have been essentially included within the national response plan," Lilly Carlisle, an external relations officer with UNHCR in Jordan told Insider. "So they are being treated exactly like Jordanians or anyone who lives in Jordan is."

Carlisle said while there wasn't a specific allocation of doses put aside for refugees, they will be included in the country's rollout and are able to sign up for a shot as they meet qualifications.

The country has procured three million doses of vaccines from Pfizer and Sinopharm and has prioritized vaccinating the elderly and those with underlying conditions.

Carlisle added that in the coming weeks, vaccine centers will be opened in the country's two biggest refugee camps, which host around 20% of the overall refugee population. Refugees living in urban centers will be able to get vaccinated at local clinics.

The Jordan Times reported that 43 refugees in the Zaatari camp were transported to a government vaccination centre to get their shots on Wednesday.

Rula Amin, a spokesperson for UNHCR Middle East & North Africa, told Insider that it's the responsibility of host countries to vaccinate their refugee populations.

"It's a moral responsibility. It's an international obligation to include refugees in such protective measures," Amin said. "Giving this vaccine to people is a saving measure, and it's actually the responsibility of the hosting countries to provide such protection to refugees they are hosting."

"Just as important ... it's self-interest," Amin continued. "There's no way that we can really stop this pandemic while excluding anybody."

Amin added that she hopes other countries with refugee populations in the region also include them in their vaccine rollout plans once they begin but added that many countries - such as Lebanon, which hosts a significant demographic of refugees - are struggling economically and socially which may pose additional challenges to a roll-out plan.

Since releasing a press statement about Jordan beginning vaccinations, 24 additional countries have committed to vaccinating refugees, bringing the total to 73, Kathryn Mahoney, a spokesperson for UNHCR, said.

"UNHCR is aware that to date, out of 114 countries currently developing national Covid-19 vaccination strategies, 64% of these have committed to include refugees in their vaccination drives," Mahoney said.

Refugees in Jordan have gotten infected with the virus at a much lower rate than the general population but continue to face more compounding hardships as a result of the pandemic, Carlisle said.

So far, there's been a 1.6% positivity rate among refugees living in the camps with a little more than 1,900 infections. However, Amin added that, due to lockdowns and safety measures, many refugees have been unable to go to work, lost their wages, and are struggling to support their families.

Amin said her and her colleagues have been hearing refugees say "throughout the past few months" that they are "not going to die from Covid" before they "die of hunger."