The jet stream has started a shift north, which could wreak havoc on weather in the US and Europe The polar jet stream circles the northern hemisphere, swirling up to nine miles above our heads like a curvy, ethereal crown on the planet.

This band of strong wind separates cold air from the Arctic from warmer air to the south, and it's responsible for transporting weather from west to east across the US, over the Atlantic, and into Europe. It controls how wet and warm these regions are.

But according to a recent study, the jet stream is shifting north as global temperatures rise. That's because the delicate balance of warm and cold air that keeps the stream in place is getting disturbed. If greenhouse-gas emissions continue unabated, the study found, the jet stream will break out of its normal range by 2060.

"The 'onset' of the jet stream's northward migration may have already begun," Matthew Osman, a researcher at the University of Arizona's Climate Systems Center who co-authored the study, told Insider.

That would wreak havoc on weather in the northern hemisphere, bringing more extreme events like droughts and heat waves to southern Europe and the eastern US. More rain and flooding are expected in northern parts of Europe and Scandinavia, Osman said. 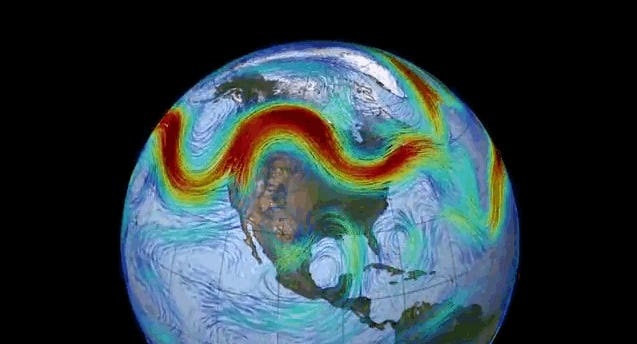 A NASA graphic showing the northern hemisphere jet stream.
NASA/Goddard Space Flight Center
The North Atlantic jet stream exists and is held in place thanks to the clash between warm air zooming north from the tropics and cold air in the Arctic. Once these air masses meet, they move east at 110 miles per hour, driven by the Earth's rotation.

But rising air temperatures mess with that hustle and flow. The Arctic is warming twice as fast, on average, as the rest of the planet. So that warm air travels farther north before it finds cold air, which leads the jet stream's position to migrate toward higher latitudes.

Osman noted that the jet stream is capricious; the band's location is constantly shifting as the temperature differential that causes it fluctuates. But his study took the long view, examining the stream's location over the last 1,250 years. To reconstruct that past behavior, the researchers looked at ice core samples from 50 sites on the Greenland Ice Sheet that date back to the 8th century. The cores revealed how much snow had fallen, and when.

Then, using climate models, the team simulated where the jet stream might move over the next four decades if greenhouse-gas emissions continue at their present rate. The results showed that the wind band's current movement threatens to exceed any previous shift.

It's expected to significantly deviate from the norm, with potentially devastating consequences.

"By pushing the jet stream outside its already large natural range, we could be exposing ourselves to increasingly severe climate risks in the future," Osman said.

More droughts and flooding could be coming People cool off near the fountain at Washington Square Park on July 17, 2019 in New York City.
Drew Angerer/Getty

Osman's study suggests that the jet stream's migration will likely cause the US East Coast to warm more quickly than it already is. And both North America and Europe will experience more droughts and heat waves.

"Europe, on the downstream end of the North Atlantic jet, will feel these effects most acutely," Osman said.

In particular, semi-arid regions of southern Europe could become more arid. Parts of northern Europe that already have a wetter, milder climates, like Scandinavia, could become even wetter. That additional rainfall would prompt more floods like the ones that plagued Europe this summer.

Changes in the jet stream could affect polar vortices, too The location of the jet stream on February 15, 2021 during the cold snap that hit North America. Black lines show the jet stream, and the white indicates the extent of freezing temperatures.
Mathew Barlow/University of Massachusetts Lowell

Some scientists think that warming will also make the jet stream wavier than it already is.

The jet stream's path is meandering and sinusoidal because not all warm air moves north at the same rate, nor does all polar air travel south uniformly. Hence the many waves in the wind band.

But a study published last month suggests that melting Arctic sea ice could increase the intensity and size of those deviating bulges. When that sea ice melts, more heat and moisture move from Earth's surface up toward space. That acts like a rock thrown into the pond of the atmosphere - it creates strong ripples above the Arctic that deform the jet stream. This creates wiggles that push extraordinarily cold air toward the equator.

So a more wobbly jet stream, consequently, increases the chances of intense winter storms and cold snaps in the US. Examples of this extreme winter weather include the polar-vortex event that struck the US in 2019 and the winter storm that left millions of Texans without power in February.

"If the jet stream's waviness increases in the future, this might imply that extreme events such as the polar vortex could also become more frequent," Osman said.