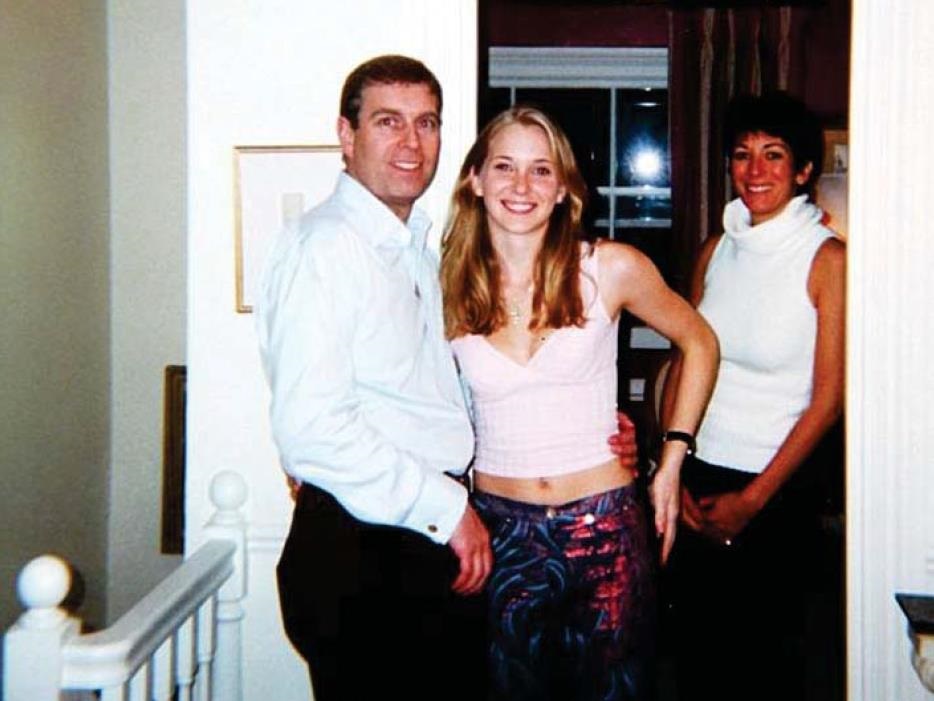 Prince Andrew and Virginia Giuffre, then known as Virginia Roberts, along with Ghislaine Maxwell. This photo was included in an affidavit where Giuffre claimed Prince Andrew directed her to have sex with him.
Florida Southern District Court

A woman who claims Jeffrey Epstein forced her to have sex with Prince Andrew at the age of 17 says the royal "knows exactly what he's done".

Speaking to reporters outside federal court in Manhattan on Tuesday, Virginia Giuffre said she won't stop fighting until both Andrew and Epstein's former personal aide, Ghislaine Maxwell, "are brought to justice".

Read more: The Queen sat next to Prince Andrew as they drove to church on Sunday in a 'show of support' for her son amid the Epstein allegations

"It's not how Jeffrey died, but it's how he lived," she said."We need to get to the bottom of everybody who was involved with that, starting with Ghislaine Maxwell and going along the lines there."

Giuffre - formerly known as Virginia Roberts - alleged in a 2015 defamation case that Epstein made her have sex with the Duke of York in his New York mansion, in London, and on his private island in the Virgin Islands back in 2001.

She also alleged that she had been "procured for sexual activities" by Ghislaine Maxwell, who was a close friend to both Epstein and the prince.

Giuffre added that she was "entrapped in a world that I didn't understand."

"I've been fighting that very world to this day, and I won't stop fighting. I will never be silenced until these people are brought to justice," she said.

Prince Andrew has denied his involvement in the case, with a spokesperson for Buckingham Palace saying he was "appalled" by the reports.

"The Duke of York has been appalled by the recent reports of Jeffrey Epstein's alleged crimes," the statement said.

"His Royal Highness deplores the exploitation of any human being and the suggestion he would condone, participate in or encourage any such behavior is abhorrent."

In another statement released by the palace on Saturday, Andrew said he had "tremendous sympathy" for Epstein's victims.

"I met Mr Epstein in 1999. During the time I knew him, I saw him infrequently and probably no more than only once or twice a year," reads the statement. "I have stayed in a number of residencies."

He added: "At no stage during the limited time I spent with him did I see, hear, witness, or suspect any behaviour of the sort that subsequently led to his arrest and conviction.

"His suicide left many unanswered questions and I acknowledge and sympathise with everyone who has been affected and wants some form of closure."

Read more: These are the most significant allegations in Jeffrey Epstein accuser Virginia Roberts' unsealed memoir

However, when asked by a reporter what she makes of Andrew's denials, Giuffre responded: "He knows what he's done, and he can attest to that."

She added: "He knows exactly what he's done, and I hope he comes clean about it."

Giuffre's lawyer, Brad Edwards, said that he personally extended an invitation to Andrew to discuss the allegations.

"With respect to Prince Andrew or anyone else that has made statements, if anyone wants to come over here and answer real questions that the victims have, and that we have on their behalf, we welcome that invitation," he said on Tuesday.

"I personally extended that invitation to Prince Andrew multiple times," he added. "Any time, we are ready, and we have a lot of questions for him."