Japan's 85-year-old emperor gave up his throne in a mystic and ancient ceremony, signaling the end of an era The emperor of Japan has officially given up his throne, officially marking a new imperial era in the country's history and paving the way for his son to inherit the world's oldest monarchy.

Emperor Akihito began a series of abdication rituals on Tuesday, becoming the first Japanese monarch to abdicate in 200 years. He inherited the throne from his father, Hirohito, in January 1989.

This video shows Akihito in traditional dress arriving at a private temple on the grounds of Tokyo's Imperial Palace to begin the ritual:

Inside the temple, Akihtio reported his resignation to this ancestors and the Shinto gods.

The ceremony is part of Japan's thousands-years-old Shinto religion, which emphasizes the use of rituals to communicate with spiritual beings.

Hundreds of people gathered outside the Imperial Palace in the rain to witness the ceremony.

Later in the day Akihito and his family attended the Taiirei-Seiden-nogi, or the main ceremony of Akihito's abdication, at the Matsu no Ma ("Hall of Pine") state room in the Imperial Palace. Standing alongside his wife, Empress Michiko, Akihito oversaw the symbolic return of the country's imperial treasures - a sword, a mirror, and a jewel - that will come into his son's possession on Wednesday.

The treasures were kept inside boxes and wrapped in cloth throughout the ceremony. According to The Guardian, the items on display at the ceremony are replicas, with the originals kept at Shinto shrines around Japan. A total of 300 people attended the ceremony. They included Japanese Prime Minister Shinzo Abe, the heads of both houses of parliament, and supreme court justices, according to The Guardian.

Akihito announced his plan to step down on health grounds in December 2017. The government passed a one-off law to allow the abdication. At the ceremony in the Hall of Pine, Abe formally announced Akihito's abdication.

He read out loud a letter from the Japanese people thanking the emperor for his service, China's CGTN TV network reported. After Abe's speech, Akihito then gave his final remarks as emperor.

He said, according to CGTN's translation:

"I have worked really hard to win the trust and appreciation from the people. This is one of my biggest happiness in my life. Since my succession to the throne, my people supported me and from the bottom of my heart. I really appreciate the support of my people." Akihito ends his final speech as emperor at the abdication ceremony on Tuesday.
Japan Pool/Pool via Reuters

Naruhito will mark the start of his reign in a ceremony to "inherit" the imperial regalia at 10:30 a.m. local time on Wednesday morning, according to Reuters.

The ceremony will not be open to female members of the royal family - a tradition that the Japanese government decided to keep despite widespread criticism. Japanese Crown Prince Naruhito, who will become emperor, and his wife, Crown Prince Masako at their residence in Togu Palace, Tokyo, in February 2019.
Imperial Household Agency of Japan/Handout via Reuters

Naruhito will then give his first public address as emperor around 11 a.m.

Wednesday's festivities will be a simple affair. Naruhito's official enthronement ceremony will take place on October 22. Dignitaries from some 180 countries are expected to attend. 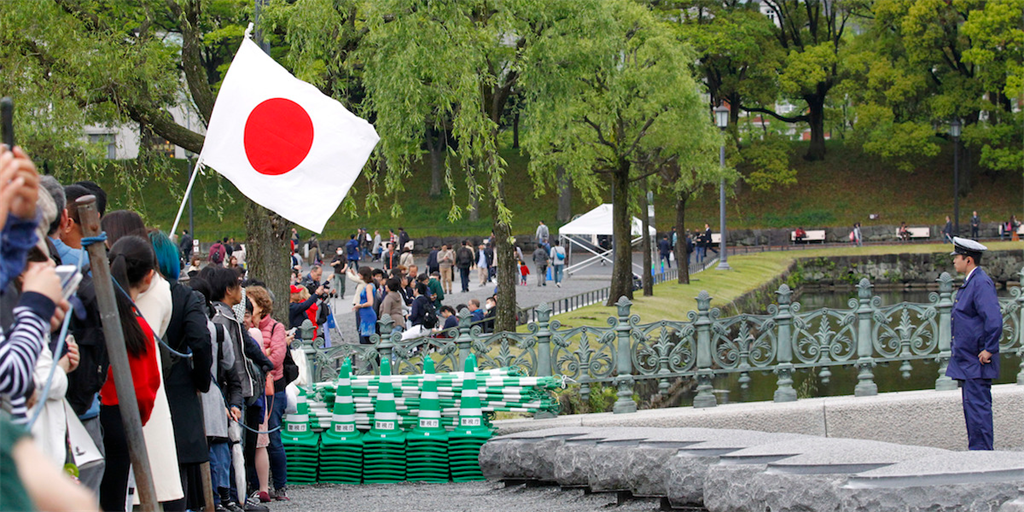 People gather near the Imperial Palace in Tokyo on the day of Akihito's abdication on Tuesday.
Eugene Hoshiko/AP

The government specially created a ten-day public holiday - from April 27 to May 6 - to celebrate the new emperor.

While many citizens are going on vacation, many others have complained about extra childcare, lost wages, and the risk of stock market turmoil.