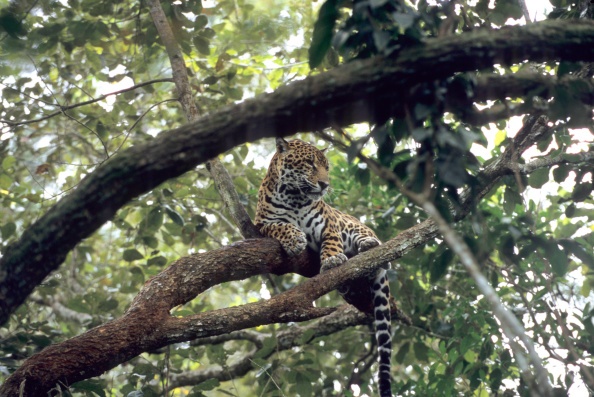 Not the Jaguar in question. (Photo by Wolfgang Kaehler/LightRocket via Getty Images)

Two days after its birth, the first jaguar to be born using artificial insemination disappeared - and was likely eaten by its mother.

The mother, Bianca, was one of five jaguars chosen to participate in the insemination experiment on account of factors like her good health, age, and behavior, according to a press release.

She was inseminated in November using laparoscopic AI methods developed by the Conservation and Research of Endangered Wildlife scientists (CREW).

The cub was born in February at environmental organisation Mata Ciliar in Brazil and seemed happy and healthy, according to a release. Two days after its birth, it disappeared from the maternity den.

"Unfortunately after two days, the cub died," a spokesperson for Mata Ciliar told FocusOn News, according to The New York Post. "We don't know why and cannot say if it was killed by the mother because it was not seen on the monitors on the second day."

"Bianca was a first-time mother and this may have influenced the outcome of the event. The veterinary team could not conduct a necropsy because the baby had already been eaten," the spokesman continued, according to The Post.

It's not clear if there are any other theories or possibilities surrounding the cub's disappearance. The press release said that the cub was "presumably consumed by its mother" and Mata Ciliar did not immediately respond to INSIDER's request for comment.

A jaguar mother eating its cub is not uncommon for carnivores to do, Dr. Lindsey Vansandt, theriogenologist and the lead scientist on the project, said in a release. Despite this tragic beginning, the scientists involved believe the experiment has promising long-term possibilities for the jaguar species.

"From a scientific perspective, we are celebrating the fact that the baby was born healthy and that AI was a success," said Vansandt said in the release.

Jaguars are an endangered species and with declining numbers surviving out in the wild, the insemination is hoped to be an answer to reviving their population.

"The jaguar is the last of the seven species of large-sized felines to undergo artificial insemination (AI)," said Dr. Bill Swanson, CREW's director of animal research. "The birth of this cub is an important historical landmark. It invigorates the possibility of the use of assisted reproduction as a management tool that increases the genetic variability of (captive and wild) populations and the conservation of these endangered iconic cats."

Related Links
The world's largest bee was found in the wild 38 years after its last sighting. It was one of the...
People hadn't set foot in this ancient 'lost city' in the Honduran jungle for 500 years. Now the...
Insane photos of soldiers drinking cobra blood during a jungle survival drill
Next on Business Insider
TAKE A LOOK | SA's first biophilic building coated with plants breaks ground in Cape Town